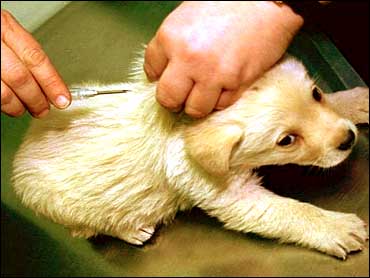 When the U.S. Food and Drug Administration approved implanting microchips in humans, the manufacturer said it would save lives, letting doctors scan the tiny transponders to access patients' medical records almost instantly. The FDA found "reasonable assurance" the device was safe, and a sub-agency even called it one of 2005's top "innovative technologies."

But neither the company nor the regulators publicly mentioned this: A series of veterinary and toxicology studies, dating to the mid-1990s, stated that chip implants had "induced" malignant tumors in some lab mice and rats.

"The transponders were the cause of the tumors," said Keith Johnson, a retired toxicologic pathologist, explaining in a phone interview the findings of a 1996 study he led at the Dow Chemical Co. in Midland, Mich.

Leading cancer specialists reviewed the research for The Associated Press and, while cautioning that animal test results do not necessarily apply to humans, said the findings troubled them. Some said they would not allow family members to receive implants, and all urged further research before the glass-encased transponders are widely implanted in people.

To date, about 2,000 of the so-called radio frequency identification, or RFID, devices have been implanted in humans worldwide, according to VeriChip Corp. The company, which sees a target market of 45 million Americans for its medical monitoring chips, insists the devices are safe, as does its parent company, Applied Digital Solutions, of Delray Beach, Fla.

"We stand by our implantable products which have been approved by the FDA and/or other U.S. regulatory authorities," Scott Silverman, VeriChip Corp. chairman and chief executive officer, said in a written response to AP questions.

The company was "not aware of any studies that have resulted in malignant tumors in laboratory rats, mice and certainly not dogs or cats," but he added that millions of domestic pets have been implanted with microchips, without reports of significant problems.

"In fact, for more than 15 years we have used our encapsulated glass transponders with FDA approved anti-migration caps and received no complaints regarding malignant tumors caused by our product."

The FDA also stands by its approval of the technology.

Did the agency know of the tumor findings before approving the chip implants? The FDA declined repeated AP requests to specify what studies it reviewed.

The FDA is overseen by the Department of Health and Human Services, which, at the time of VeriChip's approval, was headed by Tommy Thompson. Two weeks after the device's approval took effect on Jan. 10, 2005, Thompson left his Cabinet post, and within five months was a board member of VeriChip Corp. and Applied Digital Solutions. He was compensated in cash and stock options.

Thompson, until recently a candidate for the 2008 Republican presidential nomination, says he had no personal relationship with the company as the VeriChip was being evaluated, nor did he play any role in FDA's approval process of the RFID tag.

"I didn't even know VeriChip before I stepped down from the Department of Health and Human Services," he said in a telephone interview.

Also making no mention of the findings on animal tumors was a June report by the ethics committee of the American Medical Association, which touted the benefits of implantable RFID devices.

Had committee members reviewed the literature on cancer in chipped animals?

No, said Dr. Steven Stack, an AMA board member with knowledge of the committee's review.

Was the AMA aware of the studies?