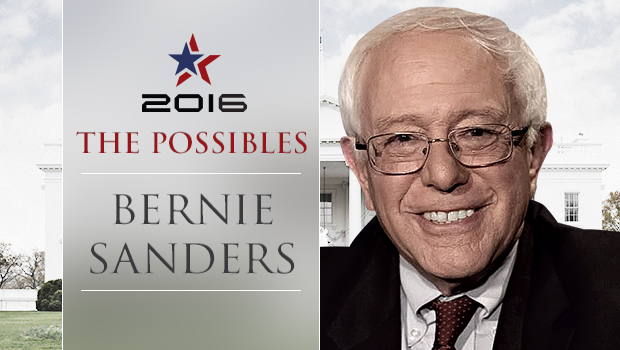 Whatever their political bent, he said, "They have every right in the world to be angry."

"They're seeing an explosion of technology. They're watching TV and seeing all the great benefits, supposedly, of the global economy," the senator said. "And they're working longer hours for lower wages. And they're scared to death as to what is going to happen to their kids, what kind of jobs are their kids going to have."

Should the 73-year-old senator decide to run for president in 2016, this will be the crux of his pitch to the American people -- that it's time for a grassroots-driven movement to significantly shift the nation's economic priorities.

The question is whether voters -- particularly Democratic primary voters -- are angry enough over the uneven distribution of wealth to support Sanders' campaign.

Most recent polls would suggest they're not. Democratic voters are largely supporting former Secretary of State Hillary Clinton's potential 2016 nomination, indicating that they're satisfied with the economic trajectory set by the Obama administration.

"If Sanders was going to be serious about the nomination, there's got to be widespread discontent with Clinton, and I think, with Obama as well," Dante Scala, associate professor of political science at the University of New Hampshire, told CBS News.

Still, if there was ever a moment for the nation to embrace a left-wing populist like Sanders, it's now.

"The issue of income inequality... has finally bubbled to the top of the agenda," said Garrison Nelson, a political science professor at the University of Vermont who's known Sanders for nearly 40 years.

Sanders' "number one issue is now an issue that Mitt Romney is talking about," Nelson said. That's when "you know it's an issue that concerns a rather wide span of Americans. In some ways, the agenda has caught up with Bernie rather than the other way around."

Sanders has been talking about income inequality for decades.

His political views were shaped as a college student in the early 1960's, though Nelson clarified, "He's not a cultural radical of the 1960's variety." Instead, the senator is more of a "1930's radical" and a "labor union lefty."

He first ran for mayor of Burlington, Vermont in 1981, winning by 10 votes. He served four terms, and in 1991 joined the U.S. House of Representatives, becoming the first Independent elected to the House in 40 years. The Boston Globe wrote at the time, "Big business and its practitioners are just as antithetical to the good of the poor and working masses as they ever were, in Sanders' view."

In his first year in the House, Sanders and four other congressmen established the Congressional Progressive Caucus, now one of the largest caucuses in the congressional chamber. One of his first votes was against the first Gulf War, and he became known in the House for his confrontations with then-Federal Reserve Chairman Alan Greenspan.

"I will never forget having Alan Greenspan up there visiting the committee, telling us how great deregulation was. I didn't buy it then, and I don't buy it now," Sanders said Monday.

Sanders was elected -- again as an Independent, with the support of Democrats -- to the Senate in 2006. As chairman of the Veterans Affairs Committee, Sanders last year helped shepherd through Congress a bipartisan bill to reform the embattled VA health care system.

Nelson said Sanders' success in Congress has been impressive, given that he's not known for being the most personable lawmaker.

"I never thought Bernie would be a good team player, but he proved me wrong," he said. "He has shown an ability to cobble together coalitions that one would never believe possible, given his ideological stance."

Sanders would need to be an effective leader to implement his ambitious, left-leaning agenda. For instance, President Obama hasn't been able to enact comprehensive tax reforms, but Sanders says it's necessary to help pay for infrastructure.

"We are losing about $100 billion every single year because corporations and wealthy people are stashing their money in the Cayman Islands and elsewhere," he said Monday. "Real tax reform can generate a significant sum of money which should be used for infrastructure and education."

Jobs and the economy

To address the issue that Americans are most concerned with -- jobs and the economy -- Sanders recently introduced a bill, along with Sen. Barbara Mikulski, D-Maryland, to spend $1 trillion on infrastructure.

"We need a major federal jobs program to put millions of Americans back to work," Sanders said at Brookings. "The fastest way to do that is to rebuild our crumbling infrastructure, our roads, bridges, water systems, wastewater plants, airports, railroads and schools... A $1 trillion investment in infrastructure could support 13 million decent-paying jobs and make our country more efficient, productive and safer."

The senator has also said the minimum wage should be raised over a period of years to at least $15 an hour, and he has called for federal legislation to ensure overtime pay and equal pay for men and women.

While President Obama has proposed making two years of community college free, Sanders said Monday, "We have got to go further."

"What we have got to learn is that in countries like Germany, Scandinavia, many parts of the world, people who are competing against us, they are smart enough to understand that the future of their countries depends on the education their young people get," he said. We have got to learn that lesson. Free public education does not have to end at high school."

Sanders has commended the "modest success" of the Affordable Care Act, but he is an strident supporter of single-payer health care systems, or what's known in the U.S. as "Medicare for all."

"We have got to grapple," he said, "with the fact that we remain the only country, major country, without a national health care program."

"In my view, at a time when senior poverty is increasing, when we have millions of seniors -- and I meet them in Vermont all the time -- people are trying to get by on $12,000, $14,000 a year," he said. "We should not be about cutting Social Security benefits, we should be about expanding those benefits."

To pay for that expansion, he proposes lifting the income cap on Social Security taxes.

With respect to defeating ISIS, Sanders said Monday that he doesn't want to see "endless war" in the Middle East. "And, having said that, you know, I don't have any magical solution, but I think at the heart of it has got to be regional activity on the countries who are most impacted by ISIS," he said, referencing Saudi Arabia's large defense budget.

"But, you know, I think it's fair to say I do not disagree with the air attacks that the United States is coordinating," he said. "What I just don't want to see is a ground presence and never ending war."

More than just a spoiler?

Should he decide to run for president, Sanders says he'll be in it to win.

The "decision that I'm going to have to reach is whether there is that willingness to stand up and fight back," he said. "And if there's not, I don't want to run a futile campaign. If I run, I want to run to win."

One thing he will not do, Sanders said, is serve as a spoiler in the general election as an independent candidate.

The senator would, however, hope to have "a real serious debate" with Clinton -- "a very intelligent person who I think is interested in issues, by the way," he said.