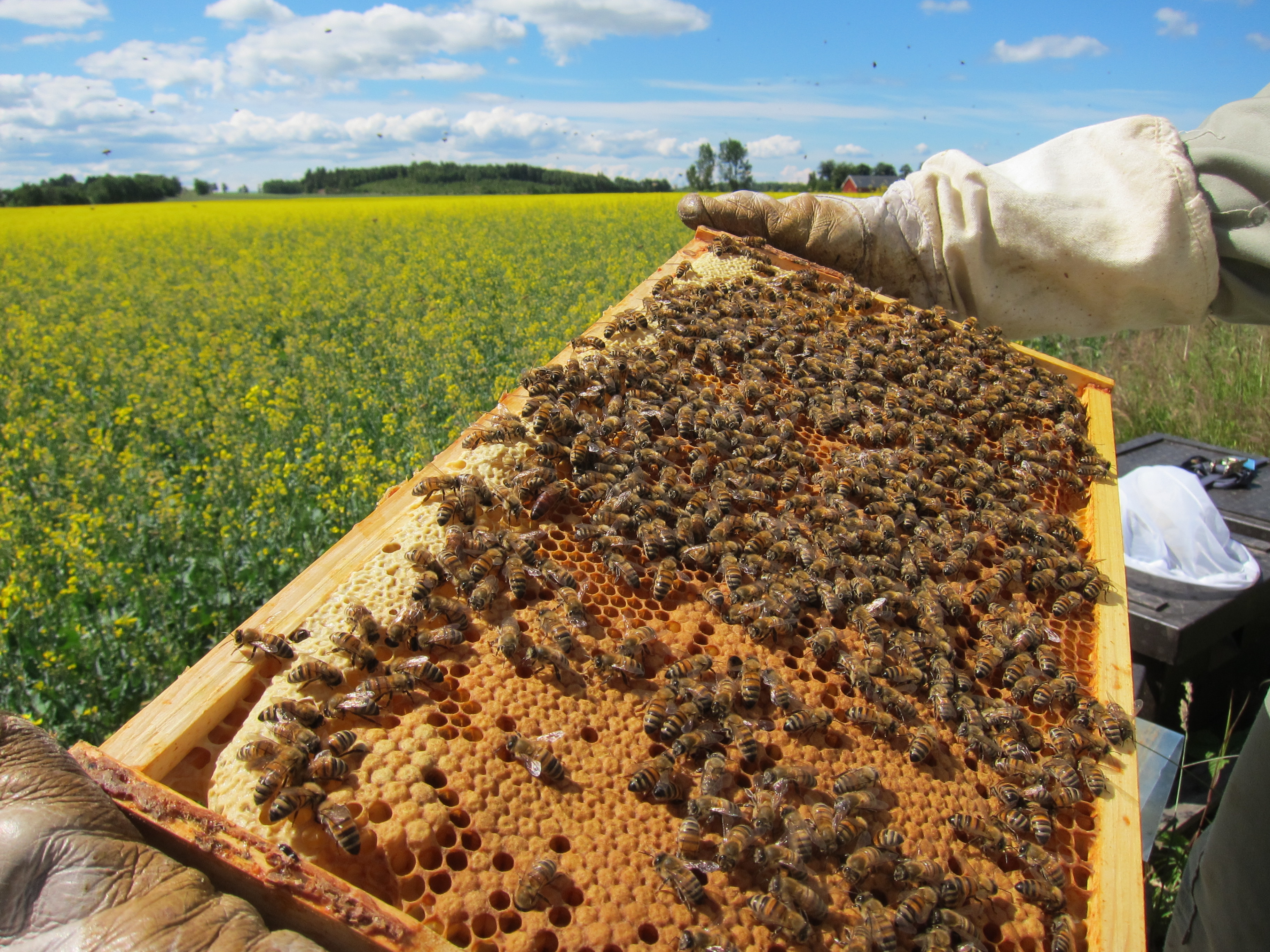 Just as smokers become addicted to cigarettes, bees might be getting hooked on a pesticide blamed by some scientists for a steep decline in their population.

That was the surprising finding from one of two studies in Nature Wednesday that examined the impact on several bee species of neonicotinoids, a class of commonly used pesticides that are used on corn and cereal crops as well as many types of fruits and vegetables.

In one study, Newcastle University's Geraldine Wright and her colleagues found that buff-tailed bumblebees and honeybees preferred a sugar solution containing the three most common neonicotinoid pesticides - which contain nicotine - to a solution without them.

"What I think is happening is that neonicotinoids are having a pharmacological effect on the neurons of bees' brain which are responsible for reward learning," Wright told reporters. "Like nicotine, they are essentially amplifying the rewarding property of sucrose they are located in. Bees think it's more rewarding so they go back to the food tube to drink more of it."

And what's more, because they are unable to taste it, the researchers surmised, the bees may have no reliable way of avoiding the pesticide.

Taken together, the findings suggest the bees are likely being exposed to the high levels of the pesticide, which earlier research has shown can impact their fitness, especially their ability to forage and collect pollen.

Richard Gill of the Imperial College in London and Nigel E. Raine, a bee expert with the School of Environmental Sciences at the University of Guelph in Canada, wrote in a commentary in the same issue of Nature that Wright's findings could be a concern if they results are proven in the wild.

"Their study does imply that foraging bees are unlikely to avoid seed-treated crops in the field, and supports previous reports of honeybees and bumblebees bringing back nectar and pollen from treated fields," they wrote. "If the preference for treated food does apply in the field, these findings suggest that we could be underestimating the exposure risk to bees from treated crops."

The second study was a field trial in Sweden looking at how several species of bees responded to an untreated control field of rapeseed and those that had been treated with neonicotinoids.

The study had a little something for all sides in the debate raging over what role, if any, the pesticides are playing in the demise of bees. It found that the bumblebees in the pesticide fields almost didn't grow while those in the control fields did. Solitary bees also didn't fare well in the pesticide-laced fields, with none returning to nesting sites in those fields.

But the pesticides didn't seem to impact the colony strength of honeybees, the most common species used in commercial pollination.

"This study is important because bees are pollinators of both crops and wild plants and the wild bees are more important than previously thought," Maj Rundlöf, the lead author and project coordinator from Lund University, said. "It's worrying that there are reports in decline distribution diversity of bees. Pesticides could be one of the multiple pressures that bees are under."

The two studies come as the European Union gears up later this year to revisit a two-year ban it has in place on three of the most popular neonicotinoids pesticides used on flowering plants. And while there isn't a ban on its use in North America, Lowe's, following pressure from investor and environmental groups, announced this month that it would stop selling them in its stores in the next 48 months.

"Studies indicate that multiple factors, including mites, poor nutrition, loss of habitat and genetic conditions, are potentially damaging the health of pollinators. Some studies say that neonicotinoid pesticides may be a factor," Steve Salazar, manager of corporate communications at Lowe's, told CBS News. "Because the studies are inconclusive, Lowe's made the decision to take additional measures supporting pollinator health out of an abundance of caution."

"We are pleased Lowe's is listening to consumer concerns and to the growing body of science telling us we need to move away from bee-toxic pesticides by taking steps to be part of the solution to the bee crisis," she said. "Bees are canaries in the coal mine for our food system and everyone, including the business community, must act fast to protect them."

Since 2006, bees have been hit by a devastating condition known as colony collapse disorder or CCD. The mysterious disorder causes honeybees to disappear from their hives, and their bodies are rarely found. Beekeepers across the United States have reported losing 40 to 50 percent of their hives to the condition, raising concern how this might affect the nation's food supply.

Experts have floated several theories for CCD, including disease, parasites, stress, and lack of access to food sources. Others have suggested that it is due to a combination of factors, including exposure to pesticides.

In their piece accompanying the two Nature studies Gill and Raine said that together they showed how pesticides are having different effects on different populations, demonstrating the need for additional research to determine whether Wright's findings hold up in the field and Rundlof's are found in different crops, in different regions and over the long term.

"Current pesticide registrations rely on ecotoxicological testing of just one species, the honeybee, when assessing risks for all insect pollinators," they wrote.

"Yet Rundlöf and colleagues found negative effects of neonicotinoids on solitary bees and bumblebees in the field, but not on honeybees, suggesting that a single species might not represent the responses of other pollinators," they said. "Potential explanations for these apparent differences could include a variable affinity of neuronal receptors for binding neonicotinoids; differences in detoxification capacities; and divergent foraging behaviors, which influence levels of exposure."

And because of varied findings, several researchers said they doubted these studies alone would end the debate over these pesticides.

"We simply need more data before we can really say what the risks are," Lin Field, head of biological chemistry and crop protection at Rothamsted Research, an agriculture research station, said in a statement. "We also have to consider the reason why we use these compounds: Can we afford not to control pest insects? Is it acceptable that yields would be reduced as a result? Are the alternative insecticides any safer to bees?"