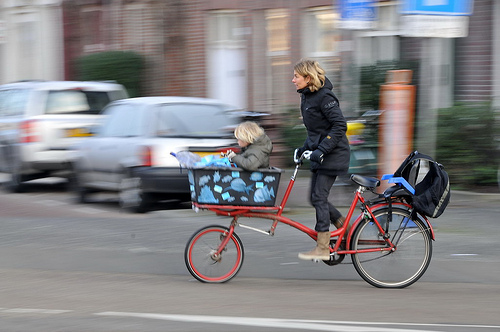 Women, according to a new survey from More magazine, are giving up on corporate America and growing less ambitious. The headline findings of the poll of 500 women aged 35 to 60: 43 percent of respondents said they are less ambitious now than a decade ago; 73 percent wouldn't apply for their boss's job.

This video from CBS News gives the deep dive on the survey results, as well as an interview with Jennifer Braunschweiger, deputy editor of More, but the question remains, will women be happier for trimming back their ambitions and re-conceiving their definition of success?

At least one comparative look at how women live in another part of the world suggests maybe yes. A Slate article by Jessica Olien about Dutch Women Don't Get Depressed, a book by Dutch psychologist and journalist Ellen de Bruin, stirred debate on the internet last year (at a time when, coincidentally, I was living in Amsterdam and able to observe the Dutch lifestyle firsthand). Why is this relevant? The book claims that an easy-going approach to careers and plenty of personal freedom are behind Dutch women's comparatively high levels of happiness.

How laid back about work? "68 percent of Dutch women work part time, roughly 25 hours a week, and most probably do not want a full-time job," reported the New York Times when it reviewed the book upon its publication in 2007. Olien gives a more qualitative description of this lack of ambition, which she observed when she was living in the Netherlands:

I've been in the Netherlands for nearly three months now, and I've come to one overwhelming conclusion: Dutch women are not like me. I worry about my career incessantly. I take daily stock of its trajectory and make vicious mental critiques of my endeavors. And I know -- based on weekly phone conversations with friends in the United States -- that my masochistic drive for success is widely shared among my female friends. Meanwhile, the Dutch women around me take a lackadaisical approach to their careers. They work half days, meet their friends for coffee at 2 p.m., and pity their male colleagues who are stuck in the office all day.

For what it's worth, that's exactly the impression I got during my six months in Amsterdam as well. Family-centric, enjoying plenty of free time, independent and not driven to climb ever upward on the career ladder, female residents of Amsterdam seemed, simply, happier than their American big city counterparts. Though, perhaps all this enjoyment of pass times observed by foreigners might not be as pleasant as it appears if "the obligation to talk about your latest exploits in yoga, home improvement or travel in Central America quickly becomes almost as much of a stressful status competition as the worst American networking sessions," as the Economist suggested. Though presenting sitting on a beach in Belize as equally stressful as 60-hour work weeks seems like a tough sell to me.

There are also undoubtedly many other factors involved in women's happiness in the Netherlands, including generous assistance from the state, sky-high living standards and a centuries old cultural expectation that men contribute around the house. But at least part of the secret of Dutch women appears to be an ability to turn off the nagging self-doubt and yearning for ever higher career positions that drive many American women to anxiety, exhaustion, guilt and sadness. Perhaps the More magazine survey shows women in the States are starting to realize they'd be better off if they went a bit Dutch. If so, good for them.