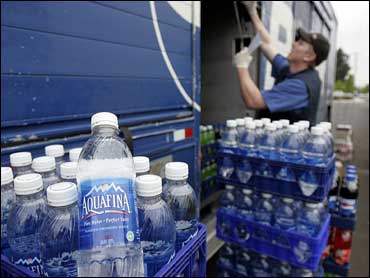 So you thought that water in your Aquafina bottle came from some far-away spring bubbling deep in a glen?

Try the same place as the water in your tap.

PepsiCo Inc. is the latest company to offer some clarity about the source of its top-selling bottled water. It announced on Friday it would change the label on Aquafina water bottles to spell out that the drink comes from the same source as tap water.

A group called Corporate Accountability International has been pressuring bottled water sellers to curb what it calls misleading marketing practices. The group has criticized PepsiCo over its blue Aquafina label with a mountain logo as perpetuating the misconception that the water comes from spring sources.

Aquafina is the single biggest bottled water brand, and its bottles are now labeled "P.W.S." The new labels will spell out "public water source."

"If this helps clarify the fact that the water originates from public sources, then it's a reasonable thing to do," PepsiCo spokeswoman Michelle Naughton said Friday. Aquafina water is taken from public sources then purified in a seven-step process.

The corporate accountability group is also pressing for similar concessions from The Coca-Cola Co., which owns the Dasani water brand, and Nestle Waters North America, seller of Nestle Pure Life purified drinking water, which gets some of its water from municipal sources.

But the bottled water industry was eager to point out that its product is much more than just tap water in a bottle, even if it does originate from a tap, reports CBS News correspondent Richard Schlesinger.

"There is reverse osmosis, there is deionization, distillation, ozonation . . . all of those steps go into making that bottled water product what it is when it gets to the consumer," says Joe Doss, president of the International Bottled Water Association.

"We don't believe that consumers are confused about the source of Dasani water," Coca-Cola spokeswoman Diana Garza Ciarlante said. "The label clearly states that it is purified water."

Sales of bottled water has been a growing source of revenue for companies such as PepsiCo, based in Purchase, N.Y., and Atlanta-based Coca-Cola as they lessen their dependence on sales of traditional carbonated sodas, as consumer concern over health issues has weakened demand.

Nestle said Friday it has been printing new labels for its Pure Life water that say whether the water comes from municipal supplies or ground water, and the labels will begin showing up later this year. Pure Life is the only Nestle bottled water that uses public water sources and the company did not have an estimate for how much of its supply originates from public sources.

Wholesale sales of bottled water grew to $11 billion in 2006, according to the Beverage Marketing Corp., and the industry is expected to maintain growth rates of about 10 percent. The fastest growing segment of the industry is sales of bottles of less than 1.5 liters, which includes the individual serving sizes sold in many convenience and grocery stores.

The decisions by Nestle and PepsiCo come as criticism grows over environmental concerns about the industry's use of local water sources as well as consumption of resin and energy to package and ship the bottles.

Last month alone, a barrage of news hit the industry: San Francisco Mayor Gavin Newsom banned city-funded purchases of bottled water; New York City launched an ad campaign called "Get Your Fill" to promote the benefits of tap water; and the U.S. Conference of Mayors adopted a resolution to bring attention to the importance of public water systems and the negative impact of bottled water.

"I think it's unfortunate we have gotten into this tap water vs. bottled water debate," Doss said. "I do not think consumers are uniformly replacing tap water with bottled water."