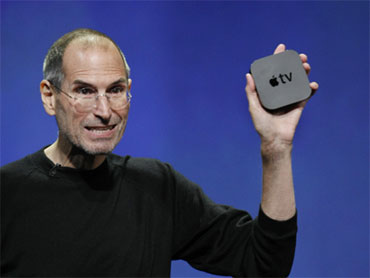 Apple Inc. is refining its plans to annex the living room into its entertainment empire.

On Wednesday, Apple unveiled a smaller, cheaper version of Apple TV, which connects to a high-definition television and can show rented movies and TV shows from Apple's own service, plus content from Netflix, photos on Flickr, YouTube clips and more.

The new $99 gadget marks a slight improvement over Apple's first television set-top box, which went on sale in 2007. The original Apple TV had to sync with a computer, a concept most consumers weren't ready for, Apple CEO Steve Jobs said at a media event Wednesday. It also didn't record live television shows the way TiVo and other digital recorders did, at a time when that was becoming a popular way to watch TV.

Also Wednesday, Apple unveiled social media features for its iTunes software, a new lineup of iPods including a touch-screen Nano and new software for its iPhone, iPod Touch and iPad devices.

The device lets people rent, not buy, content. Apple TV owners will pay $4.99 to rent first-run high-definition movies the day they come out on DVD. High-definition TV show rentals will be 99 cents.

Apple said the same movie studios that have allowed iTunes users to rent and buy movies have agreed to include their titles for streaming. Apple did not rent TV shows before, but now episodes will be available from News Corp.'s Fox, The Walt Disney Co.'s ABC, ABC Family and Disney Channel and BBC America. Jobs said he hoped other television companies would join once the service gains popularity.

Apple TV, which will be available within a month, will also display shows, movies, photos and music streamed over Wi-Fi from other devices computers with iTunes installed, as well as iPhones, iPads and the iPod Touch. For example, an iPad owner could start watching a movie on the tablet, then walk into the living room and, with a few taps, finish watching it on the TV screen.

Consumers may have grown more savvy about watching TV over the Internet since Apple's first attempt, but Apple now faces increased competition for their attention.

Some television companies replay episodes on their own websites, while others allow viewers to tune in on aggregator sites such as Hulu. Netflix has made its streaming library available to its subscribers on many devices, including Microsoft Corp.'s Xbox 360 video game system, Apple's own iPhone and iPod and Roku's set-top boxes. Roku, anticipating Apple's announcement, cut the prices of its devices this week, with the least expensive now costing $60. A high-definition version costs $70 still $29 less than the new Apple TV.

Forrester analyst James McQuivey said in an interview Wednesday that he doesn't believe Apple TV will add significant momentum to the currently small set-top box business. Nor does McQuivey believe it will grow into a big moneymaker for Apple, a company that has successfully built buzz around the iPhone and iPad, such that customers camp out for hours or days to be among the first to own one.

Apple TV is "a slightly smarter Roku, that has a significantly better marketing push behind it than Roku did," McQuivey said. "I'm actually kind of surprised that Apple didn't realize that they weren't revolutionizing the category much."

Instead, McQuivey said he sees Apple TV as a peripheral for iPad owners who spent a lot of money on the coolest new device and might be willing to spend $99 more to extend its contents onto the TV screen.

Additional content at attractive prices may be the way to get more people interested in Apple TV, McQuivey said bundled subscriptions to TV channels or shows, plus content from Netflix and Hulu's pay offerings, perhaps.

But Apple may continue to face resistance from media companies, many of which fear that such bundles cut undercut lucrative cable TV deals and that the 99-cent television rentals would hurt higher-priced offerings for permanent download. Most episodes currently sell on iTunes for $1.99 or $2.99.

News Corp., for one, had a fierce internal debate about the merits of the 99-cent plan, but CEO Rupert Murdoch pushed to accept it, mainly because of the success of The Wall Street Journal's iPad app, which is free to the Journal's paying subscribers, according to a person familiar with the matter.
The deal for Fox-created TV shows including "Glee" is limited to a trial period of several months, which mollified those opposed to the plan, the person said. The person spoke on condition of anonymity because internal discussions were confidential.

In a public statement, Fox Filmed Entertainment CEO Jim Gianopulos said "we're excited to be working with them over the next several months to explore this innovative offering."

Fox cannot let Apple rent shows that it buys from other studios, including "American Idol," made by FremantleMedia Ltd., and "Fringe," which is made by Time Warner Inc.'s Warner Bros. Television. Fox's rentals include "Glee," "Family Guy" and "The Cleveland Show."

Anne Sweeney, co-chairwoman of the Disney-ABC Television Group, said in a statement the company was proud to team up with Apple on its rental offering, which will make available shows such as "Cougar Town" and "Desperate Housewives." Apple's Jobs is Disney's largest single shareholder and sits on the company's board.

Kurt Scherf, an analyst with the market-research group Parks Associates, said requiring consumers to buy yet another box for the living room "is a real inhibitor."

And although he praised Apple's decision to lower the price of the device itself, he had doubts about TV rentals for 99 cents.

"Part of me is still wondering if that is too rich for a consumer to pay, given all the other options that are out there to consume and catch up on TV shows that don't cost a thing," he said.

Michael Gartenberg, a partner at consulting firm Altimeter Group, cast a more optimistic light on Apple's chances of making it into consumers' living rooms, but said in an interview that he doesn't expect it to drastically change anyone's TV watching habits.

Instead, it just raises the stakes for Apple's competitors.
"This puts a lot of pressure on the Rokus and the Boxees and all the other minor league players," he said.