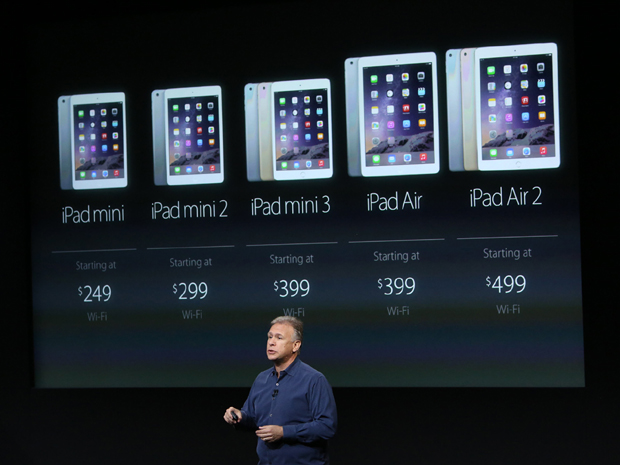 Apple (AAPL) unveiled new iPads and Macs at an event on Thursday. But as company executives stood to confidently sing the praises of their latest and greatest offerings in tablets and personal computers, there was an undercurrent of concern.

For all the triumphs claimed, a CBS MoneyWatch analysis of the comparable unit sales over time of the iPhone, iPad and Mac lines shows that Apple has grown even more dependent on sales of its smartphones. The trends in tablet and PC sales are declining or flat over the last several years.

The following graph shows the comparative unit sales performance of the iPhone, iPad and Mac lines through Apple's fiscal 2012, 2013 and 2014. (Fiscal fourth-quarter 2014 results will be announced on Oct. 20.)

The large spikes in iPhone and iPad sales coincide with holiday seasons. The black lines show the unit sales trends over time for the two product families.

Mac sales have been flat, while iPad sales, which had grown, have tapered off over time. Only the iPhone has seen a clear trend line of growth in units sold.

Even though the iPhone 6 set a sales record for Apple, it needs products that can provide revenue and profit growth. The stock price dropped more than 1 percent on Thursday after the product announcement, suggesting that investors were disappointed with the new offerings.

Apple has long depended on periodic introductions of innovative products that could claim not only initial interest from consumers, but build sales strength over a period of years. The Mac, iPod and iPhone all demonstrated that sustained market trajectory.

But the iPad, which launched on a strong note, has dropped off faster than previous product lines. It may be that the initially promised "magic" turned out to be less than many consumers actually felt. A growing number of credible tablets running Google's (GOOG) Android have taken a toll, as have smartphones with large screens that reduce the need for an additional device.

That's why Apple increased screen size for the iPhone 6 and 6 Plus. But their quick sales could potentially take even more sales away from the iPad. In addition, the iPhone has benefited from the upgrade policies of wireless carriers, which encourage people to get new units every couple of years at a $199 payment.

However, iPads enjoy no such regular mechanism to encourage upgrades. Consumers keep them longer or pass them on to families and friends. That reduces the market for new units, which have an initial cost that's multiple times higher than an iPhone.

If Apple can't change the dynamics of tablet sales, it could be a big problem.