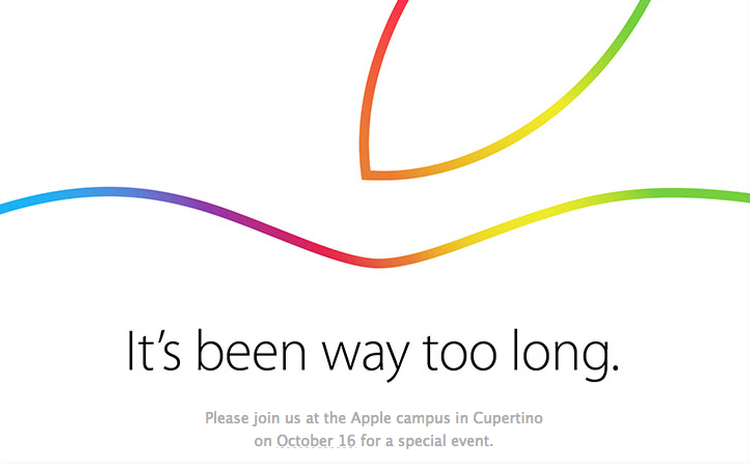 SAN FRANCISCO -- Apple is expected to step up its efforts to boost recently slumping iPad sales with the unveiling of its latest tablet computer at an Oct. 16 event.

The showcase also is expected to feature an update to the operating system for its Mac computers and the possible release of a new digital payment service called Apple Pay. The company's new iPhones released last month include a wireless chip equipped to make the payments, but the service isn't available yet.

In keeping with its usual practice, Apple Inc. isn't saying what's on the agenda. Instead, a cryptic invitation sent Wednesday to reporters and analysts simply said: "It's been way too long."

This is the time of the year that Apple typically releases its latest products to cash in on the holiday shopping season.

"Apple is definitely going to show off iPads at the event," says CNET.com senior writer Shara Tibken. "There's probably going to be new colors, such as potentially a gold version. We're also going to see the fingerprint sensor and some of the other features that have made it into the iPhone but haven't yet hit the iPad."

Some reports suggest that the next generation of iPads will include a larger version with a 12.9-inch screen. But the new larger iPad may be delayed, The Wall Street Journal reports, because Apple's suppliers are overwhelmed keeping up with demand for the new iPhone 6 and iPhone 6 Plus, which rolled out last month.

The company's last tablet, the iPad Air, came out nearly a year ago. Although it's Apple's sleekest tablet yet, the iPad Air hasn't proven compelling enough to accelerate the company's tablet sales. After a solid performance in last year's holiday shopping season, Apple's iPads have faltered. Through the first half of this year, Apple had shipped 29.6 million iPads, a 13 percent drop from the same time last year.

Since the first model was released in April 2010, Apple has sold more than 225 million iPads. But many people are still using iPads that they bought several years ago; recent generations haven't changed enough to prompt them to spend another $500 to $700 for a new tablet. Apple also has been facing tougher competition from a variety of tablet makers using Google's free Android software, as well as from Microsoft Corp.'s rival device, the Surface.

Apple's most recent iPhone includes a hot-selling model with a 5.5-inch display screen. Some analysts believe the bigger iPhone might siphon sales from Apple's iPad Mini, which has a 7.9-inch screen. The standard iPad boast a nearly 10-inch screen.

"We're also going to see new Macs" at the upcoming event, Tibken says, along with the new operating system for Macs, called Yosemite. "Apple first talked about that at its developers conference in June and it's time for that to hit the market."

The Oct. 16 event will be held at the company's headquarters in Cupertino, California. You can follow CNET's live blog of the event here beginning at 1 p.m. Eastern, 10 a.m. Pacific.