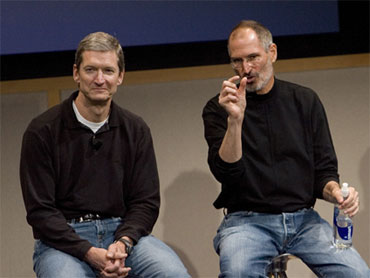 SAN FRANCISCO - If the past is any indication, Tim Cook's mastery of inventory management and his high expectations of employees should leave Apple Inc. in good hands while its charismatic leader, Steve Jobs, takes a medical leave of absence.

Apple said Monday that Cook, the chief operating officer, will take charge of the iPhone and iPad maker as Jobs focuses on his health. Unlike Jobs' half-year medical leave in 2009, during which he specified he'd return to work at the end of June and stuck to it, Apple did not say when, if ever, Jobs would return as CEO.

That means Cook, 50, considered a logical eventual successor to Jobs, 55, could be in charge for a long time, perhaps permanently.

Jobs has been Apple's public face and pitchman, making gadgets such as the iPod, the iPhone and the iPad household names. Jobs pulled Apple back from the brink of financial disaster after returning to the company in 1997 following a 12-year hiatus. He has become the heart of Apple, such that investors send shares tumbling on every bit of news or rumor of his ailing health.

But Jobs is not the only executive pivotal to Apple's successes.

Cook has run Apple twice before: first for two months in 2004 while Jobs battled pancreatic cancer, and once again for five-and-a-half months in 2009 while Jobs received a liver transplant.

The first time Cook was in charge, things went so well that Apple promoted him from executive vice president to chief operating officer in 2005. Cook has since become Apple's top-paid executive, with a salary of $900,000 for the current fiscal year. (Jobs limits his salary to $1.)

During Cook's most recent tenure, which lasted from mid-January to the end of June 2009, Apple released a new version of the iPhone and updated laptop computers on schedule. The company also announced that its iTunes app store hit a major milestone: More than one billion apps were downloaded within the first nine months of its existence.

Apple appreciated Cook's 2009 contributions. In a recent regulatory filing, the company said that because of his "outstanding performance" during that period, it awarded him in 2010 a $5 million bonus and restricted stock units worth $16.9 million on the date they were granted.

Jobs is confident in Cook's role as temporary replacement. In an e-mail to employees Monday, he said, "I have great confidence that Tim and the rest of the executive management team will do a terrific job executing the exciting plans we have in place for 2011."

Apple declined requests to interview Cook and said the company would not comment further beyond releasing the memo.

Cook, an Alabama native, has been a strong asset to Apple since his arrival in 1998, as he is credited with tuning Apple's manufacturing process to solve chronic product delays and supply problems.

Cook's mastery of inventory management has played a major role in Apple's ability to accumulate $51 billion in cash and short-term investments - a hoard that can help it keep its lead in the market for portable electronics as others struggle to follow.

For years now, he has been running Apple's day-to-day operations but remained in the background while Jobs commanded the spotlight at the launch of such products as the latest iPhone and iPods and, more recently, the first iPad tablet last spring. Cook probably won't be on stage pulling any technological rabbits out of Apple's hat, but he will likely take on a bigger role in helping it innovate.

Although he is quiet, Cook is no shrinking violet. A devout cyclist off the job, Cook is a workaholic who devours energy bars throughout his long days at the office. Like Jobs, he can be demanding and expects his subordinates to have the answers about both big and small business issues.

Because of Cook's role before Jobs' latest medical leave was announced, Forrester analyst Sarah Rotman Epps said it's difficult to say how much of Apple's success is currently coming from Jobs and how much has been instilled into the entire executive culture of the company.

Whether it stems from Jobs himself or the entire executive team, Apple's success is in creating products that consumers don't realize they want, she said, which requires a "very strong vision" at the top of the company.

Piper Jaffray Co. analyst Gene Munster said that Cook is "as much an operational genius as Steve Jobs is a product genius," but that Jobs is simply irreplaceable.

Still, several analysts pointed out that while Jobs is a vital part of Apple, he is not the company himself. His innovation and management style seem to have permeated the company sufficiently by now for it to keep running in his absence.

"Apple is more than the sum of its parts," Misek said. "It's the creative genius of so many people ... and we think they'll be all right."

On CBS' "The Early Show" this morning, personal finance expert Carmen Wong Ulrich said it will take a lot more than one person to run the company.

"What you see down the pipeline for the next couple of years, things look really good," said Ulrich. "We just saw the huge deal with Verizon with the new iPhone. That's going to be millions and millions of iPhones sold this year. The iPad 2 is coming out in the spring. We also have the new operating system for the Mac, the OS X Lion, coming out at the end of the year.

"So there are a lot of things in the pipeline that are going to keep them in the lead in terms of innovation, but the questions - and the blogs are afire last night - after two years, what then?"