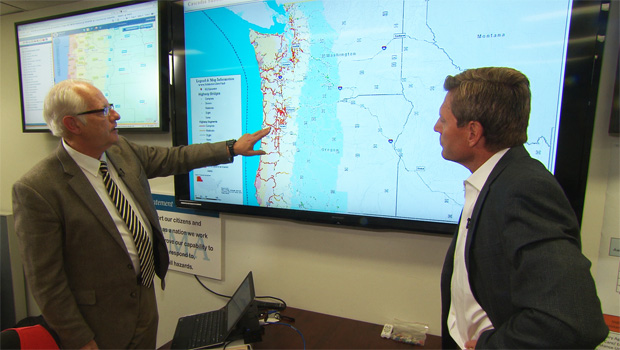 Could a tsunami similar to the one that devastated Japan five years ago this week wreak the same kind of havoc along our northern Pacific Coast? Unfortunately, the experts say it's just a matter of time. Our Cover Story is reported by Don Dahler:

In March 2011 the world watched in awe and horror as a colossal tsunami ravaged eastern Japan -- the result of a 9.0 magnitude earthquake.

Entire cities were washed away; millions were stranded without power or water. 15,000 died.

It was an otherworldy event that happened thousands of miles away. Thank goodness, many Americans thought, it couldn't happen here.

But it could happen here.

In fact, scientists say it's a question of when -- not IF -- a devastating earthquake, followed by a huge tsunami, strikes the continental United States, right in the Pacific Northwest.

"This would be like five or six Katrinas all at once, up and down from California to Canada, would be the closest thing I can think of," said Chris Goldfinger, a paleo-seismologist at Oregon State University.

It may sound like a Hollywood disaster movie, but it's not; this is the future for the region's seven million people, says Goldfinger. His research shows much of the region is overdue for a major quake.

The last one was back in 1700 ... long before there were large cities right in harm's way. "If it happens anytime soon it woudl just devastate the area," he said.

Goldfinger estimates there's a one-in-three chance this quake will strike sometime in the next 50 years.

"We're not completely unprepared, but we're pretty darn close," he said. "On a scale of one to ten, we're probably a little shy of one at this point."

Ground Zero is the 700-mile-long area off the Pacific Coast called the Cascadia Subduction Zone, where the North American tectonic plate meets another plate known as the Juan de Fuca.

The two plates are converging -- one sliding under the other -- but are stuck. "And so what happens is the weaker plate, which is North America, buckles," said Goldfinger. "And eventually something's going to give, and so the coastline that's been jacked up over 500-ish years or so is going to drop about a meter in about a minute or so."

And that's just the earthquake. Next comes a tsunami, with waves as high as 50 feet roaring on shore, reaching miles inland.

It's a threat the government says it's taking seriously. Dahler asked Ken Murphy, the Administrator for Region X of the Federal Emergency Management Agency, "Is FEMA ready for the Big One?"

"I would never say we are ready," he replied.

The agency has spent years preparing the federal response to an earthquake and tsunami in the Pacific Northwest. FEMA's best-case scenario: 10,000 dead. And that's assuming no beach tourists, which would lead to their worst-case scenario -- simply too terrifying to contemplate.

"Depending on when it happens, we're talking numbers that this nation I'm not sure is really prepared to deal with," said Murphy.

"Potentially the greatest natural disaster this country has ever experienced?" asked Dahler.

"I would say it has the potential for that. This is an event you send everything to, and scale back down if you don't need it."

The quake could displace a million people from northern California to southern Canada. Large parts of Seattle, Portland and Vancouver will crumble. In coastal towns, roads and bridges will likely be impassable, stranding whole communities. The region's economy could collapse. Rebuilding might take years, even decades.

"The structural engineers tell us that a vast majority of the building will collapse in a seismic event," said Superintendent Doug Dougherty.

Three of Seaside's four schools are also in the tsunami danger zone. Its high school is just feet away from the Pacific Ocean.

"The students and staff, if they are able to evacuate, have between 15 and 20 minutes to get to high ground, 1.3 miles [away]" said Dougherty. "And that's one of those other pieces that keeps me awake at night."

One hundred miles to the north, in Westport, Washington, Ocosta Elementary is another school with seemingly no way out. So it built its own way out straight UP; a new school building currently under construction offers safe and high ground right on its roof. It's the country's first vertical evacuation structure, with walls 44 feet high and 14 inches thick.

"The community, they were looking at the safety of not just their children now, but generations in the future," Akerland said. "This is not an affluent community, so it was a huge commitment."

Other evacuation plans and seismic upgrades are taking place. But not nearly fast enough, say the experts.

Back at Seaside, Oregon, three years ago, the school district did try moving all its students to a new campus outside the tsunami zone. But when they found out it would take an 18 percent property tax increase, the voters rejected the measure by a margin of almost two-to-one.

Dahler asked, "When the bond measure to move the schools to a safer area failed, were you surprised?"

"Oh, I was not only surprised, but heartbroken," replied Dougherty. "It's just very, very expensive for our local citizens to foot the bill entirely. I hope people don't understand the implications of their decisions because that would basically be writing off an entire school district's student population."

With no money from the state, or the federal government, Dougherty says he's planning to retire and work for another ballot campaign for a new campus.

And back at Oregon State, Chris Goldfinger continues to warn about a disaster that science says is just a matter of time.

"This is going to scare a lot of people," said Dahler.

"Well, I don't think that's a bad thing," Goldfinger replied. "If you're really well-prepared, and the infrastructure is hardened, that can be the end of it. If you don't plan at all, it's going to be a catastrophe. And then there's just nothing you can do about that."

​Some frank words about profanity