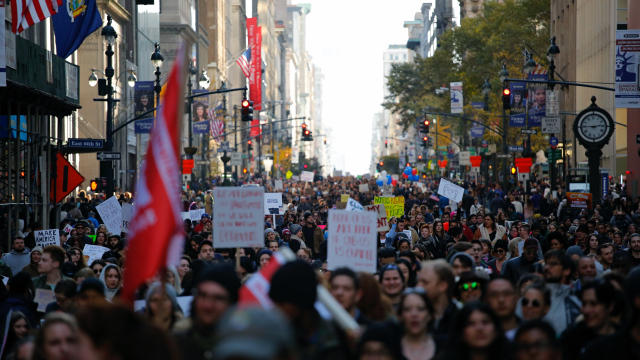 NEW YORK -- Thousands took to the streets Saturday across the United States as demonstrations against President-elect Donald Trump continued in New York, Chicago, Los Angeles and beyond.

Once the crowds arrived at Trump Tower in the afternoon, they spanned all the way down to West 51st Street, 1010 WINS’ Darius Radzius reported.

Police warned the protesters not to cross the metal barricades protecting the “frozen zone,” but two did and were immediately arrested, Radzius reported.

Otherwise, the demonstration has been peaceful.

Protesters rallied at New York’s Union Square before picking up steam and taking their cause toward Trump Tower. Police set up barricades in front of some of the most expensive stores in Manhattan as the group made its way along Fifth Avenue.

“I just can’t have Donald Trump running this country and teaching our children racism, sexism and bigotry,” said Noemi Abad, 30, a fashion designer, as she marched down the famous road. “Out of his own mouth he made this division. He needs to go - there’s no place for racism in society in America.”

Trump’s comments - particularly a 2005 recording of him making lewd comments about women - sparked outrage during his campaign. That spilled over into a fourth day of demonstrations following an election that ended with half of U.S. voters choosing the other candidate, Hillary Clinton.

In Portland, where some of the most contentious protests have taken place, several hundred people have started an “unpermitted protest march” near Pioneer Courthouse Square, CBS affiliate KOIN reports. One arrest was made short after 7 p.m. PST and two more were arrested about an hour later.

A small group started with a peaceful anti-Trump gathering with people chanting “peaceful protest.” Things escalated after that with people in masks and throwing things at police.

This is the fifth night in a row that protesters have been demonstrating in Portland. Previous protests have grown out of hand, resulting in significant property damage and disruption.

Police in riot gear are on the scene and working to control the crowd. Police made announcement over loud speaker telling protesters to move off the streets. In some areas, protesters were letting cars through, but other streets are completely blocked with people sitting or standing in the road.

Over the loud speaker, police told protesters to stay on the sidewalk or they would be arrested. Police have already arrested more than 40 people over the course of 5 days of protesting and riots.

Thousands of people rallied Saturday In Los Angeles for in a fourth consecutive day of protests denouncing the president-elect, CBS Los Angeles reports.

The event organized by Unión del Barrio got underway at 11 a.m. and was expected to took emonstrators to downtown Los Angeles.

As a precaution, police closed several on- and off-ramps of the 110 and 101 freeways to prevent protesters from getting onto the thoroughfares.

Saturday’s protest is was  the largest march yet in LA against Trump.

Overnight, 195 protesters in downtown were arrested as another protest against Trump came to an end.

There was some drama when police said a small group of protesters refused to allow a police SUV through one area.

People chanted, “Not my president” as well as “hey, hey, ho, ho, Donald Trump has got to go.”

They also chanted, “No Trump, no KKK, no fascist USA.”

Jennifer Cruz, 18, of Ventura, California, carried a sign that asked: “Legalize weed but not my Mom?” - a reference to Californians’ Tuesday passage of a measure legalizing recreational marijuana use.

Cruz said her parents have been in the United States illegally for 30 years, although her mother has spent years seeking citizenship. She called the possibility of their deportation terrifying.

“We talk about it almost every day,” she said. “My Mom wants to leave it in the hands of God but I’m not just going to sit back and not do anything. I’m going to fight for my parents, even if it kills me.”

“He doesn’t realize all the families he’s hurting,” she said of Trump.

“What he’s been able to do is make 50 percent of the nation look over their shoulder,” he said. “If you’re gay, if you’re LGBT, if you’re Muslim, if you’re Latin, if you’re special needs, if you’re female, it’s a much unsafer place now.”

“What is happening today is going to be the normal for a while,” he said of the demonstration, “because we’re not going to just sit back and watch our rights being taken away, our health care being taken away.”

Protests were mainly peaceful, but in Portland, Oregon, a man who was participating in a march was shot after a confrontation with someone in a vehicle. Police expect the man to survive and detained four people in connection with the shooting. A motive for the shooting was unclear. The four people detained are believed to be gang members, but the victim is not.

Authorities reported instances of vandalism and assault during a rally that organizers had billed as peaceful earlier in the day.

In other parts of the country, spirited demonstrations on college campuses and peaceful marches along downtown streets have taken place since Wednesday.

Trump supporter Nicolas Quirico was traveling from South Beach to Miami. His car was among hundreds stopped when protesters blocked Interstate 395.

“Trump will be our president. There is no way around that, and the sooner people grasp that, the better off we will be,” he said. “There is a difference between a peaceful protest and standing in a major highway backing up traffic for 5 miles. This is wrong.”

More than 200 people, carrying signs, gathered on the steps of the Washington state Capitol. The group chanted “not my president” and “no Trump, no KKK, no fascist USA.”

In Cincinnati, hundreds of protesters had already taken to the streets early Saturday afternoon to peacefully protest the jury’s deadlock in the trial of a former white police officer who killed an unarmed black motorist in 2015.

A mistrial was declared in the trial of former University of Cincinnati officer Ray Tensing. He was fired after shooting Sam DuBose in the head after pulling him over for a missing front license plate last year.

Anti-Trump protesters had joined up with trial protesters and marched through downtown.

In Chicago, hundreds of people including families with small children chanted “No hate. No fear. Immigrants are welcome here” Saturday as they marched through Millennium Park, a popular downtown tourist attraction.

The protesters were chanting, “No KKK, no racists. USA. No Trump,” “No more deportation. We say yes to immigration” and other slogans, CBS Chicago reports.

Michigan Avenue near Wacker Drive was blocked to vehicle traffic as the protesters headed toward what organizers said was a gathering near the Art Institute.

On Saturday about 1 p.m. Richard Domenico Ehlert, an organizer of a larger group, said the group was walking heading east on Adams towards the Art Institute. His group is not named and Ehlert said the protesters are peaceful.

Sonja Spray, 29, who heard about the protest on Facebook, said she has signed an online petition urging the electoral college to honor the popular vote and elect Clinton.

“Women aren’t playthings. Journalists aren’t pawns. People of color are not commodities. Marriage equality is not up for debate,” Spray said.

“It’s not that we’re sore losers,” said Nagel, a Bernie Sanders supporter who voted for Clinton. “It’s that we are genuinely upset, angry, terrified that a platform based off of racism, xenophobia and homophobia has become so powerful and now has complete control of our representation.”

Demonstrations also took place internationally. A group of Mexicans at statue representing independence in Mexico City expressed their concerns about a possible wave of deportations. One school teacher said it would add to the “unrest” that’s already in Mexico. About 300 people protested Trump’s election as the next American president outside the U.S. Embassy near the landmark Brandenburg Gate in Berlin.

President Barack Obama meets in Berlin next week with Chancellor Angela Merkel and several other European leaders, and is expected to confront global concerns about Trump’s election.

Woman shot and killed while pushing baby stroller in NYC