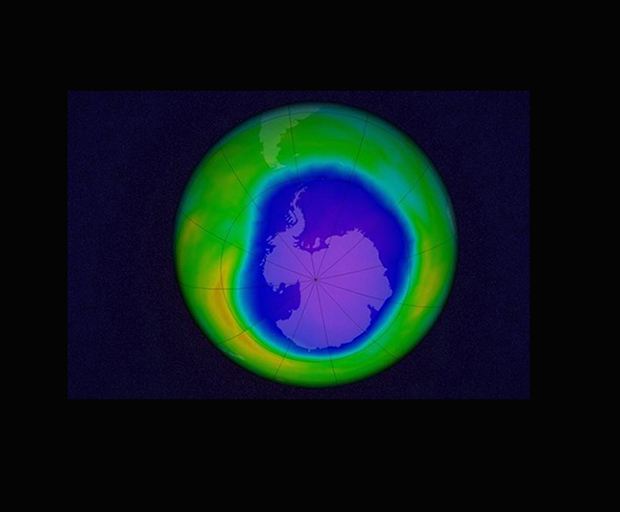 An MIT-led team of researchers has pinpointed what they call the "first fingerprints of healing" of the Antarctic ozone layer. They report that the ozone hole, which occurs each September-October in the Antarctic spring, has shrunk by more than 4 million square kilometers since 2000.

The findings were published Thursday in the journal Science.

"We can now be confident that the things we've done have put the planet on a path to heal," lead author Susan Solomon, the Ellen Swallow Richards Professor of Atmospheric Chemistry and Climate Science at MIT, said in a press release. "Which is pretty good for us, isn't it? Aren't we amazing humans, that we did something that created a situation that we decided collectively, as a world, 'Let's get rid of these molecules'? We got rid of them, and now we're seeing the planet respond."

While the ozone hole seems to be healing, the researchers did find that this ozone recovery has slowed at certain times, depending upon volcanic eruptions taking place from year to year.

What human actions contributed to the rebound? The scientists determined that the shrinking was due to a decline in atmospheric chlorine that comes from chlorofluorocarbons (CFCs), the chemicals that once seeped out of aerosols, cleaning products, or refrigerators. In 1987, these chemical compounds were banned thanks to the Montreal Protocol, an agreement signed by many countries around the world.

The large ozone hole was first pinpointed from ground-based data that started being collected back in the 1950s. Since the 1980s, when British Antarctic survey scientists found that total October ozone levels were dropping, researchers made a point to use data from that month to track Antarctic ozone measurements.

Typically, scientists have found that the ozone depletion process starts in late August each year, with the hole forming completely by the beginning of October. Solomon's team decided to look earlier in the year -- at September ozone levels -- just as the hole is opening up. The researchers found that as chlorine levels from CFCs decreased, the hole expansion rate slowed down considerably.

From 2000 to 2015, Solomon and her team examined the Antarctic ozone hole for the month of September. They sent up weather balloons and satellites to examine ozone levels, in addition to studying satellite measurements of sulfur dioxide from volcanic emissions, which also plays a role in ozone depletion. Weather changes were also taken into account.

The team then applied computer model simulations to compare September ozone measurements year-to-year and ultimately predict what ozone levels would be in the future. The ozone hole was at its largest in 2000, but shrank by more than 4 million square kilometers over the course of the next 15 years. These changes ended up matching the predictions of the computer models.

"It's been interesting to think about this in a different month, and looking in September was a novel way," co-author Diane Ivy, a researcher at MIT's Department of Earth, Atmospheric and Planetary Sciences, said in the release. "It showed we can actually see a chemical fingerprint, which is sensitive to the levels of chlorine, finally emerging as a sign of recovery."

Solomon views the future of the ozone hole with optimism. She stressed that the ozone hole could shrink and even close permanently by the mid-21st century, as long as there aren't any major volcanic eruptions in the region.

"What's exciting for me personally is, this brings so much of my own work over 30 years full circle," Solomon added. "Science was helpful in showing the path, diplomats and countries and industry were incredibly able in charting a pathway out of these molecules, and now we've actually seen the planet starting to get better. It's a wonderful thing."

The research team also included scientists from the National Center for Atmospheric Research in Boulder, Colorado and at the University Leeds in the United Kingdom. The research was supported partially by the National Science Foundation and the U.S. Department of Energy.