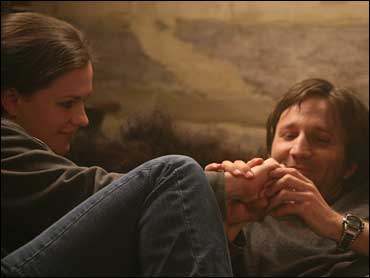 Born in Canada, raised in New Zealand and currently living in New York, Anna Paquin may have a rootless, international life. But in "Blue State," she plays a very American character who's fleeing the country after the re-election of President George W. Bush in 2004.

She co-stars with Breckin Meyer, with the two characters setting out on a road trip to Winnipeg, Canada. Meyer's blogger, John, fulfills a promise to leave the U.S. if President Bush is re-elected, and Paquin's Chloe comes along for the ride.

The 24-year-old Paquin, however, says she's not especially political.

"I'm not American, I don't get to vote, so my feelings, strong or otherwise, are pretty irrelevant," she says. "I've actually never voted because I don't live anywhere where I'm allowed to."

The movie itself is just as much a road movie and even a romantic comedy as it is political.

"We always talked about it as a movie with politics as a backdrop, where the politics came out of the characters and what the characters believed in," director Marshall Lewy told The Showbuzz. "We're not trying to be really preachy."

"Blue State" is a family affair. Paquin's brother Andrew attended Columbia University with Lewy and served as producer of the film.

"He produced one of my short films," said Lewy. "He gave the script to Anna, and she wanted to do it. She came on as an executive producer on the movie, and everything took off from there."

Photos: Premieres And Parties At Tribeca

Paquin and her brother, who run a production company together, had wanted to make a movie for some time — and when "Blue State" presented itself, Paquin says it would have been a little silly if he didn't approach her.

"It's a young twenty-something lead, it's not like my brother is going to be like, 'I have a really great idea for an actress for this and it's not my sister,'" she jokes.

In a movie full of passionately political characters, Paquin is the voice of reason. Though Chloe and John begin as strangers to each other, she gradually beguiles John — much as Paquin has been doing for movie audiences since her Oscar-winning performance in 1993's "The Piano."

She was just 11 years old when she won her best supporting actress award, but Paquin has since built an impressive filmography that twists and turns unpredictably. She has acted in acclaimed indies like "25th Hour," "The Squid and the Whale" and "Hurlyburly," but most know her as Rogue from the "X-Men" franchise.

Paquin also has acted in numerous plays, including Kenneth Lonergan's "This is Our Youth," and recently wrapped a starring role in Lonergan's "Margaret," his second film after "You Can Count on Me." Upcoming projects on HBO — the film "Bury My Heart at Wounded Knee" (premiering May 27) and the Alan Ball drama series "True Blood" — will also likely awaken many to Paquin's burgeoning talents.

"Be it theater, gigantic summer blockbuster or indie, it really isn't about the medium," she explains. "It's about whether it's a project that interests me."