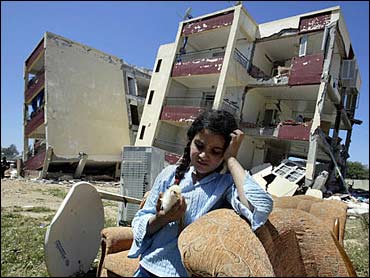 Looting and disease threatened survivors of Algeria's earthquake, and foreign rescuers began to pull out Sunday as hope faded that more people may be found alive in the ruins of quake-shattered buildings.

As the death toll from Wednesday's quake neared 2,200, anger erupted over the slowness and meagerness of government aid and rescue efforts, with many people calling for President Abdelaziz Bouteflika's resignation.

Their homes demolished, many survivors are living in makeshift camps of tarpaulins, umbrellas and sheets in open spaces amid the wreckage.

Furious crowds harangued the president as he toured the devastated region east of the capital Algiers where the quake's epicenter was located, causing him to cut short his visit.

In Corso, quake survivor Mourad Sellah is one of many accusing the government of being responsible because of allegedly shoddy construction.

"This was genocide, it was criminal, those houses were like coffins, we knew they were not safe," said Sellah, whose sons - age 7 and 12 - were killed.

Sellah, along with other Corso residents, says the government did not give them any help in finding survivors and hasn't helped in clearing the rubble.

"Everybody is corrupt and the government is absent. There is no material for reconstruction," says Sellah.

Five days after the quake, authorities are still far from establishing a definitive death toll, as countless bodies are believed buried under fallen buildings. As of Sunday, the official toll stood at 2,162 dead and 8,965 injured.

In the town of Reghaia, a single flattened 10-story building is thought to hold more than 500 bodies. Police and soldiers blocked streets leading to the ruin, standing guard in the stench of decaying bodies and clouds of dust kicked up by the wind.

Survivors who lost loved ones, homes and livelihoods banded together to protect what remained, forming patrols to guard their neighborhoods from looters.

Dozens of angry locals grabbed a suspected jewelry thief in an evacuated building, dragging him by the scruff of his neck through the streets. Police struggled to keep the crowd at bay before taking the man away in a car.

"People in vans were seen looking around for things they could steal, but they saw we were well prepared," said Samir Helli, 26, who works in a diaper factory. "If they try to take anything, they will be strangled."

Reghaia, a town of 120,000 people 15 miles east of Algiers, didn't suffer the devastation as in nearby communities that were almost flattened, but many of its buildings were damaged. Structural experts were checking to see which could be salvaged, and said repairs could take months.

While their homes are too unsafe to live in, many people here were able to recover refrigerators, televisions and other belongings. They said police, who concentrated on protecting shops in the city center, were too overwhelmed to patrol elsewhere.

"We have had to take care of our own security and that of our family by ourselves," said Ahcene Kabash, a construction supervisor who, like many survivors, wore a white mask below his bloodshot eyes against dust and the smell of decay.

Officials in Reghaia insist they are doing all they could and denied that looting was a problem. "This is not like Iraq," said Ahmed Makhloufi, the city's vice president for social affairs.

But outside the fissured town hall, an official fended off frustrated women, men and even children demanding tents.

"We still need about a thousand tents," the official told the crowd. "Maybe, God willing, we'll have the problem sorted in two or three days."

Survivors sickened by drinking dirty water flocked to a health center next to one makeshift camp, suffering from diarrhea. The center also treated more than 20 people Sunday for panic attacks and headaches - symptoms of stress, health workers said.

"People are drinking water that's meant for washing their hands. It's full of germs and dirt," said Malika Lamare, a doctor at the center.

"It's the lack of water and the heat," Lamare added. "Without water, they risk death."

In Algiers, Yahia Dahar, director general of Mustapha Hospital, Algeria's largest, insisted health authorities were prepared for any outbreak of disease. "The health ministry has sent teams of epidemiologists to the stricken regions," he said.

Pupils whose schools were wrecked will start the summer recess immediately, in part "because of the psychological trauma they've been through," Education Minister Abou Bakr Ben Bouzid told Algerian radio.

With hopes all but gone of finding more survivors, foreign rescue teams prepared to go home. A 90-member Swiss team that left the Boumerdes region, where the quake was strongest, is expected back in Switzerland on Monday.

Survivors in Reghaia pinned photographs of missing loved ones to walls. "Mr. Madani Chergui is sought by his family. Please call," read one note, under a picture of a middle-aged man.