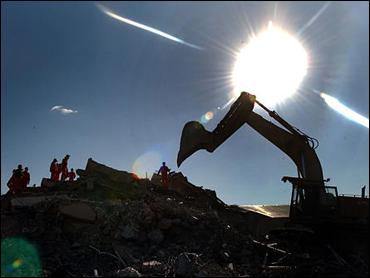 No signs of life emerged by the debris of the four-story building and rescuers began using cranes and heavy equipment to work through the debris despite protests of the parents of those still missing.

"God took him, why are you cutting him into pieces?" screamed Fethi Ketenalp, the father of a 14-year-old still trapped under the rubble, throwing himself in front of a crane.

Although sniffer dogs and electronic listening equipment had not located any survivors since morning, rescue workers insisted that they still harbored hope. People can live for several days trapped under debris.

"This is still a search and rescue operation," insisted Ahmet Aydin, in charge of the emergency center at the site.

By Friday evening, 32 students were still missing after 117 had been rescued and 49 found dead, rescue officials said. The children, aged 7 to 16, were mostly sons of poor Kurdish farmers.

The confirmed death toll from Thursday's quake rose to 115 Friday, according to officials. About 1,000 people were injured. It was not clear if the official toll took into account the latest bodies extracted from the dormitory.

Thousands were left homeless and anger over the lack of tents, food and water erupted into violent clashes in Bingol, the predominantly Kurdish city hit by Thursday's 6.4 magnitude quake.

Police fired shots into the air with automatic rifles to disperse demonstrators demanding the resignation of Bingol Governor Huseyin Avni Cos. Some protesters threw stones at the governor's office and others themselves on the ground.

Anger grew after a police van injured several demonstrators by speeding through the crowd. Clashes spread to side streets with young Kurds tearing large stones from the paved streets to throw them on police cars and armored vehicles. Policemen wearing balaclavas could be seen running down streets firing their automatic weapons into the air.

At least five policemen and three journalists were injured and several were detained, the governor said.

On Friday evening, a few hundred commandos with armored personnel vehicles with machine-gun tops were deployed around the governor's office and soldiers could be seen patrolling the city center.

There is deep distrust between Kurds and security forces in Turkey's east after a 15-year Kurdish rebel war and ensuing government crackdown left 37,000 people dead and millions displaced.

Turkish officials accused Kurdish rebels of infiltrating the demonstrators and of taking advantage of the quake to raise tensions in the region.

Erdogan defended the police's decision to open fire in the air, although the Bingol chief of police was fired after the clashes. Only soldiers and no policemen could be seen in the streets of the city after the clashes, in an apparent attempt to diffuse tensions.

"We just came here to get tents. But they started firing on us," said protester Ramazan Yararli.

The Turkish Red Crescent has sent 3,700 tents and 13,000 blankets to the region, but Cos said he hadn't distributed most of them Thursday because he wanted a fair distribution. He said 20,000 more tents were needed. Food and drinking water were also insufficient, officials said.

At least half a dozen countries have offered aid, but Turkey has so far said it does not need any help.

At the school, many vented their anger at the quality of the school's building. Public Works and Housing Minister Zeki Ergezen said an investigation had been launched against the contractor of the school.

"Murderers," shouted Gazal Gunalan, whose 15-year-old son Mehmet was buried under the rubble. "Look at this building, it is the bad construction that took the lives of our children."