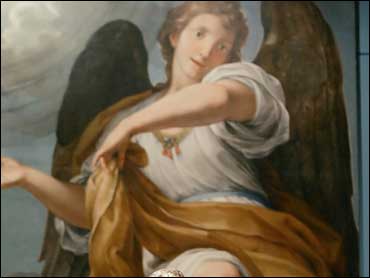 Italian Art of angels from the Old and New Testaments are part of an exclusive exhibit on loan from the Vatican and on display through the end of the year at the Mississippi Museum of Art.

"Between God and Man: Angels in Italian Art," curated by Francesco Buranelli, director general of the Vatican Museums, features paintings, modern art and statues from more than 60 of Italy's museums and private collectors.

"We are trying to get the Italian art in the states," said Andrea Fontecedro, CEO of the Chrisalide, the Italian company that helped organize the exhibit.

Fontecedro collaborated on the exhibit with the Rev. Malcolm Neyland of the Lubbock Diocese, who has brought other Vatican Museum exhibits to Southern cities, including a collection of 12th and 13th century Italian frescos shown exclusively at the Museum of Texas Tech University in 2002.

The last major exhibit of Vatican art ran for three months at the Milwaukee Public Museum in 2006. The show of 330 artifacts included a bronze cast of Pope John Paul II's hand, made in 2002.

The Mississippi Museum of Art, which moved into a larger space this past week, was a perfect choice for the Angels exhibit, said Neyland, who founded the Vatican Exhibit Foundation to lure more exhibits from the Vatican to the South.

"We decided we wanted something really spectacular to open the building," said museum director Betsy Bradley, who added that the focus was to find a show that "appealed to everyone."

"Between God and Man" was unveiled Saturday at the opening of the new museum.

"This is the first time in the history of the Vatican that an exhibit is bringing together private collectors and unseen art," Neyland said.

The exhibit, on view at Jackson museum through Dec. 30, will be returned to Italy after it closes.

"It really is a once in a lifetime exhibit," Bradley said.

The art is divided into sections, including "Angels in the Lives of Jesus and Mary" and "Archangels and Angels in Pop Culture," which showcases images from films such as "City of Angels."

The $14 million renovated museum, located in downtown Jackson, moved less than a city block to its new location in what was known as the arts pavilion. Throughout the years, it has featured art and cultural exhibits including Russian, French, Spanish and German treasures.