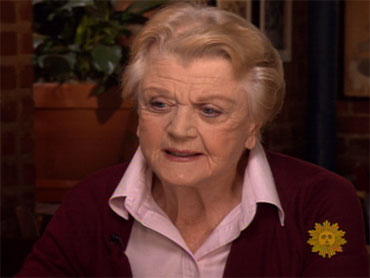 It's no mystery why "Murder She Wrote" was such a big hit for such a long time on CBS. The credit goes to Angela Lansbury, who received 12 consecutive Emmy nominations for her role . . . yet never won! These days she's back on Broadway, where's she's won five Tonys - and is up for a SIXTH Tony Award for "A Little Night Music." "CBS Evening News" anchor Katie Couric chatted with her for this Sunday Profile, originally broadcast on December 9, 2009:

Don't let the wheelchair fool you: Angela Lansbury is as fit - and as fiesty - as ever.

And she's in a familiar place, starring on Broadway in the revival of Stephen Sondheim's classic, "A Little Night Music."

There's no slowing down for her, having done three Broadway shows in the past three years.

"Do you ever feel like, 'Gee, I've had an amazing career. I've worked my tail off. I'm ready to relax a little?'" asked Couric.

"The bottom line is, I really don't know how to relax to the degree that I could just stop," Lansbury said. "So when something comes along and is presented to me, and I think, 'Gee, I could have some fun doing that,' or 'I think I could bring something to that,' I'll do it."

"Doing it" means Angela will be eligible to win a record sixth Tony Award for best actress. It also means she'll be doing eight shows a week, at 84.

"I mean, there are times when you walk into that dressing room and you think, 'I can't do this. I cannot do this.' And it's a curious thing: When you sit down in front of that mirror and you pick up that first piece of makeup and you start to apply it - you see how I immediately go under the eyes? First thing! - and suddenly, you transform yourself into that person who is capable of going on stage and delivering that performance. And you do it, and yes, you can. Yes, I can! Yes, I can!"

For "A Little Night Music," she transforms herself nightly into the elderly but elegant Swedish matriarch, Madame Artfeldt, a self-aggrandizing grande dame.

"Was it her humor and her joie de vivre that attracted you?" Couric asked.

"Well, certainly, I thought her history was so interesting. Here was a woman, who in her youth had been a great courtesan, and had bedded the kings of Europe, and reared this daughter. Catherine Zeta Jones plays my daughter, Desiree."

"If only she were a little more attractive!" Couric quips.

"We are naughty, aren't we?" Lansbury said.

Whereas industry doors have long since closed for most actresses her age, Angela Lansbury - with her more than 50 films, dozen Broadway shows, and a landmark television series in tow - is still traveling along the only highway she's ever known.

"This is the only thing that I really know how to do," she said, "and I think that is the reason that I've stayed with that all my life. And it really has been all my life since I was 13, 14 years old."

Her Irish mother Moyna was also an actress; her English father, Edgar, a timber merchant. It seemed the only Lansbury destined for legendary status was her controversial and charismatic grandfather George, who is apparently better known in England than she is.

"Yes, absolutely true," Lansbury said. "He was the leader of the Labor Party. He was a great pacifist. And he certainly was a champion of women."

But after her father died, Angela's champion became her mother. Moyna sent her to drama school . . . first in London, then in New York and, ultimately, Hollywood. By 17, she was in her first MGM film, as the flirtatious, cockney maid in the 1944 classic, "Gaslight" (left).

Couric notes that the film's director, George Cukor, was "appalled" that a woman her age could pull off playing such a convincing seductress.

But playing characters beyond her years would become the story of Lansbury's life.

Despite back-to-back Oscar nominations - for "Gaslight," and "The Picture of Dorian Gray" - she'd spend her twenties and thirties hopelessly typecast as a mother . . . in "The World of Henry Orient" . . . "Blue Hawaii" as Elvis' mom . . . and "The Manchurian Candidate" (left), in which she gives son Laurence Harvey advice only a loving mother could give ("You are to shoot the presidential nominee through the head.").

Hollywood's lack of imagination had her packing her bags for Broadway. And it wasn't until she hit a trifecta of Tonys for "Mame," "Dear World" and "Gypsy" that things were finally coming up roses for Angela Lansbury.

"Did you see Broadway as an oasis away from the limits that were imposed on you in Hollywood, and somewhat liberating in terms of your choice of characters?" Couric asked.

"Oh, no question about it. I felt liberated the minute I came to Broadway. Those years at MGM - I hadn't really been judged as an actress until I made it on Broadway."

Soon after she was crowned the Queen of Broadway a fourth time for "Sweeney Todd," Lansbury found herself the toast of television, playing the mystery-writing amateur sleuth Jessica Fletcher, on "Murder She Wrote."

"All I needed was a body, you know, a crime, and I was off and running," she said.

"You have said, 'When women get older, they become invisible. They lose their place in society.' Did you feel that at any point? And how were you able to fight that?" Couric asked.

"Just by working, and doing what I do," she said, "and I really only come to life, I think, when I'm working. My whole modus operandi has been work and family, really those two."

But for Angela, work and family were almost always intertwined. Her husband, former actor Peter Shaw, was also her manager. And when he died of heart failure in 2003, Angela lost both her business and life-partner of 53 years.

"How hard was it to keep going and keep working without him?" Couric asked.

"It was a period of huge adjustment for me to work without him, and not to have that backup, and have that person that you can go home and talk about it to," she said. "Not having that is the worst part of losing a mate. It really is."

Now, Angela says, it's all about keeping busy . . . whether it's dinner with friends at Joe Allen's (where we met), or being the spokesperson for the ALS Association - a disease that claimed the life of her sister, Isolde.

"We don't have a cure" for amyotrophic lateral sclerosis, Lansbury said, "but this is the year where ALS is going to go for the cure. And we're absolutely gung-ho for that."

"Makes you feel good to do something that's sort of touches so many people," Couric suggested.

"All the gifts you've been given?"

"Yes. We don't know how lucky we are until we lose our health. And so many people are not prepared for that."

One thing Angela's not prepared for is retirement. And she still views her film career as a piece of unfinished business.

"I'd like to do one great movie before I pass along the way," she said. "I don't know what it'll be. But I think there's one out there somewhere."

Should any casting agents be interested, you know where to find her - the place Angela Lansbury can always call home . . . until the next role comes along?

"Until that phone call comes in!" she laughed.