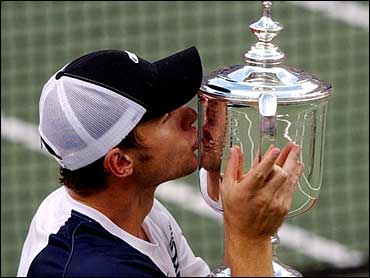 The fourth-seeded Roddick, backed by the game's top serve and impressive on-court patience, easily downed the third-seeded Ferrero, who was playing his fourth match in four days.

The match ended with three straight aces by the American, lifting his totals to 23 for the final and 123 for the tournament.

Then he let his emotions flow, crouching at the baseline, covering his face with his hands and fighting tears. He climbed through the courtside photographers' pit and climbed into the stands for congratulatory hugs.

"It hasn't sunk in," Roddick said as he accepted his trophy and $1 million prize. "I came to this tournament so many times as a little kid and watched from way up there. I just can't believe it."

It was Roddick's season-leading 19th straight victory, making him 37-2 since teaming with coach Brad Gilbert, Andre Agassi's former mentor, after a first-round exit at the French Open.

Roddick rises to a career-best No. 2 in the rankings, one slot below French Open champion Ferrero, and now leads the tour with six titles in 2003.

The most important one, of course, is the most recent, a championship at the U.S. Open to put alongside the junior title he won at the National Tennis Center only three years ago. Stefan Edberg is the only other person with boys' and men's U.S. Open titles.

Roddick is just 21 years old and Ferrero is 23, which made for the youngest combined ages of U.S. Open finalists since Pete Sampras beat Andre Agassi in 1990.

On that same stage Sunday, Roddick had his coming-out party, demonstrating brilliance with his serve and, more impressively, an ability to hang in there on long rallies with Ferrero, a consummate baseliner who beat Agassi in the semifinals.

Ferrero was out on a practice court in the shadow of the stadium 2 1/2 hours before the final's start, getting some last-chance work on returning serves. To replicate the power Roddick produces, Ferrero's coach told his hitting partner to move up about 1 meter (3 feet) inside the baseline to serve.

But Ferrero was often reduced to bystander.

It wasn't just that Roddick smacked serves that would be fined for speeding on a European highway. He also has mastered the art of placement.

"Today I didn't play my best tennis," Ferrero told the crowd, "but Andy played so good, and he served unbelievable, and I couldn't do much."

If the Spaniard was listless, it probably was because he is the first man in the 35-year history of the Open era to have played four matches in four days at a Grand Slam tournament. Roddick was playing for a third straight day; his fourth-round match ended Wednesday, a day earlier than Ferrero's.

And Ferrero did look out of sorts at times, including when he forgot he had to switch sides of the court after the opening game of the second set. He wasn't moving his feet well in general, and that's one of the keys to his game — he earned the nickname "Mosquito" for the way he zips around the court.

Even when Ferrero did show spunk, Roddick had an answer.

On the opening point of the tiebreaker, Ferrero used a flat-out dive to his left for a stinging backhand volley. But as he was rising and gathering himself, Roddick spun a forehand passing winner.

Ferrero then hit a brilliant winner that made him run so far he ended the point against the stands, and a Roddick error made it 2-1 for the Spaniard. But Roddick reeled off six straight points to take the set, ending it with a crosscourt forehand winner that Ferrero simply gave up on.

Roddick never was broken, though he actually faced a break point in the third game of the afternoon. He saved it with a hard serve that drew a long return. Roddick then picked up the only break of the first two sets in the very next game.

He got to break point when his backhand return clipped the net and landed deep, forcing an awkward forehand by Ferrero that landed wide. And Roddick took a 3-1 lead with a crosscourt forehand winner to the corner.

Roddick lost the second point of the ensuing game, then began a run of 23 straight points on his serve. That included the final game of the first set, which Roddick won this way: forehand winner down the line, service winner, ace and ace.

Roddick never had been past the quarterfinals at the U.S. Open, losing at that stage to the eventual champion the past two years. In 2001, he was beaten by Lleyton Hewitt of Australia in a match marred by Roddick's racket-slamming, body-twisting tantrum over a disputed call. It was the sort of temper Roddick gained a reputation for as a junior, and was criticized for by his second-round opponent last week, Ivan Ljubicic.

But he does less and less of that now, and particularly since he paired up with Gilbert.

In 2002, Roddick lost at the U.S. Open to Sampras. And after all of the questions about whether Roddick could be a worthy successor, he provided quite an answer.