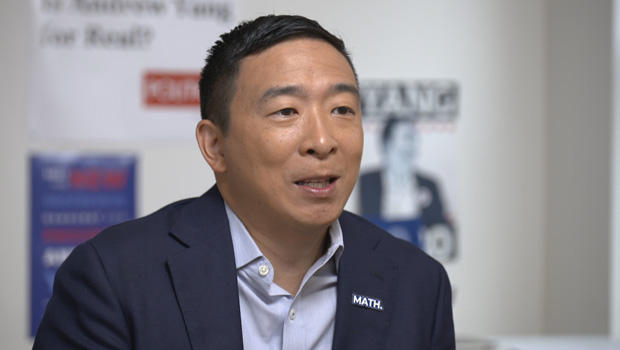 In a park in Los Angeles last month, thousands gathered to hear the Democrat perhaps least likely to be running for president. "I am the ideal candidate for that job, because the opposite of Donald Trump is an Asian man who likes math," said Andrew Yang.

In Yang's world, MATH stands for "Make America Think Harder," and Yang is mostly thinking about dire economic times ahead.

He's on-message, if sometimes off-color: "That's right, I did some f****** math! We have to be pretty f****** stupid to let a trillion-dollar tech company pay nothing in taxes, am I right, Los Angeles?"

Nicholas Thompson, the editor-in-chief of Wired, asked Yang, "Is anyone having more fun running for president?"

"I highly doubt it!" he replied.

For a first-time politician, Yang is doing surprisingly well. Polls put him in single-digits, but in the last three months, Yang picked up $10 million in donations. That's less than half of what the front-runners took in, but it put him solidly in the middle of the pack.

His supporters are known as the Yang Gang. "He's all about humanity first," said Hessa, explaining her support.

Andrew Yang, in fact, calls himself an entrepreneur.  His parents immigrated from Taiwan: His father, a physicist, and his mother, with a master's in math and statistics.  Yang grew up in Schenectady, New York.  His first big success was running a college test-prep company, and then he founded Venture for America, a non-profit that helps train entrepreneurs in struggling cities.

He thinks jobs – or rather, the loss of them – are why Donald Trump won the presidency.

"The numbers tell a very clear story," he said. "We automated away four million manufacturing jobs in Michigan, Ohio, Pennsylvania, Wisconsin, Iowa, all the swing states that Donald Trump needed to win, and did win."

And Yang believes robots and artificial intelligence will accelerate the loss of all kinds of jobs. "Now, what we did to those jobs, we're doing to the retail jobs, the call center jobs, the fast food jobs, the truck driving jobs, and on and on through the economy," he said.

Thompson met Yang along the campaign trail, as he took a break for some tea ("Duke of Earl Gray"), and then discovered a foosball table, where he naturally talked about economic theory, and another of his big ideas: reforming how we calculate Gross Domestic Product, or GDP.

"If you want to see how out-of-whack GDP is, all you have to do is look at my family," Yang said. "My wife is at home with our two boys, one of whom is autistic. And what is her work every day, included at in GDP? Zero. And we know that her work is among the most important work being done for our society."

Instead of just measuring economic output, Yang-style GDP would include health and life expectancy, mental health, freedom from substance abuse, how children are doing, and how clean our air and water are.

But the centerpiece of the Yang campaign is what he calls the Freedom Dividend, historically called Universal Basic Income. As president, he would give $1,000 a month – $12,000 a year – to every American adult, rich or poor.

"Our economy functions much better when we have money to spend, where we can participate in the market, where businesses are responsive to us," he said. "We'll start more businesses. We'll be able to change jobs more easily. So, the money doesn't disappear in our hands. It creates a trickle-up economy from our people, our families, and our communities up."

When asked if a universal basic income is a good idea, Austan Goolsbee, who was chairman of President Barack Obama's Council of Economic Advisors, said, "There's some parts of it that are an interesting idea. On a practical basis, you would kind of need to know, well, how would that work? That's a thing that's going to cost $2.4 trillion a year."

Thompson asked, "How big a number is 2.4 trillion?"

"Let's just put it into context: The entire income tax in the United States on everyone combined is, like, $1.5 trillion," Goolsbee replied.

To pay for it, Yang proposes a federal Value Added Tax, essentially a sales tax of 10 percent. (Though Goolsbee estimates it might have to be up to 30 percent.)  Yang says his proposals will particularly hit big-tech.

"If we put a mechanism in place where we, the American people get our fair share, tiny slice of every Amazon sale, every Google search, every Facebook ad, every robot truck mile, we can generate hundreds of billions in new revenue and easily afford $1,000 dividend for every American adult," Yang said.

Yang has already started giving out Freedom Dividends. He's called 10 families with the good news – paid for at first out of his own pocket, and then by the campaign.

Though it's all getting Yang a lot of attention, the odds against him becoming president seem overwhelming. But he's not lacking in confidence; Andrew Yang says he's done the math. He told the L.A. crowd, "I am here with you tonight, one of only two candidates in the field that 10% or more of Donald Trump voters say they will support, which means that when I am the nominee, we win the whole thing!"

Yang sues New York Board of Elections over canceled primary

Yang's nonprofit to donate $1M to families impacted by coronavirus