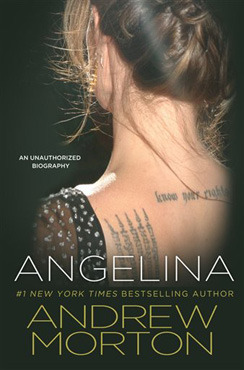 Slated to be published Aug.3, it hit store shelves on Saturday, July 31.

Morton centers his story on the dark secrets of Angelina Jolie's life, while acknowledgng her many accomplishments - a mother of six, a United Nations Goodwill Ambassador, winner of an Oscar and several Golden Globes, and one of Forbes Magazine's most influential women of 2009.

Her troubled past is no secret but Morton, whose previous subjects included Tom Cruise, Madonna and Princess Diana, takes a look into what shaped Jolie.

Morton begins in Jolie's childhood, growing up in a bitter divorce battle between an aspiring and very attractive movie star (Marcheline Bertrand) and a famous and faithless father (Jon Voight). Morton claims that her father's affairs and the divorce that followed would haunt her for the rest of her youth, causing her to fall into her wild behavior.

Growing up a dysfunctional family, Jolie had liberties most young girls only dreamed of.. Morton claims Jolie lost her virginity at 14 and was able to bring her boyfriend home to sleep.

According to St. Martin's Press, Morton has drawn from exclusive interviews with friends and relatives and private photos that tell the story of the radiant beauty who emerged from a wild youth to be a voice for the helpless. But critics have pointed to what the say is Morton's failure to source much of his information and to rely too heavily on reports from "friends" who ask to remain anonymous.

Among all the images of Jolie's troubled past Morton brings to light, nude photographs from 1999 could be the most scandalous. Morton told Star Magazine, "The photographs are a startling reminder to Angelina of a period in her life I'm sure she wants to forget, a shady piece of her history that she's kept hidden away, even from Brad."

When he begins writing about Jolie's elationship with Brad Pitt, he states "The corn-fed boy was toast," referring to the time when they met each other. He claims Jolie seduced Pitt quickly not only with her beauty, but with her wishes of having a large family and her desire to help the deprived people around the world. Morton writes extensively about Jolie's role in the Pitt-Aniston divorce, how the Jolie-Pitt relationship began, and its present state.

Morton also touches on the painful death of Jolie's mother and the troubled relationship with her father, Jon Voight. Eventually, he wraps up his autobiography on a sunny note, showing how the star has found a way to escape her demons through happiness with her children.