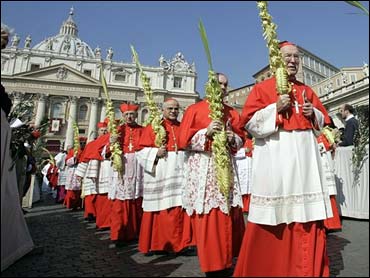 The death of a pope triggers a mourning period as well as a gathering of cardinals to elect a successor, in what can be a lengthy process. It culminates with a vote — or up to 30 — in the Sistine Chapel. Here is a breakdown of the Catholic procedure that was used to name John Paul II as pope 26 years ago, which will also be used to choose a new pontiff.

Death:
A pronouncement is made in Latin that the pope is dead and is certified by a physician. The camerlengo, or chamberlain, then calls out the pontiff's baptismal name — "Karol," for Pope John Paul II — three times in a ritual to confirm there is no response. In the past, the camerlengo struck a silver hammer against the pope's forehead to confirm his death, but it's unclear if the ritual is still active.

The camerlengo then destroys the symbols of that papacy: the "Pescatorio," or Ring of the Fisherman, and the dies used to make lead seals for apostolic letters. The pope's quarters are sealed and funeral arrangements are begun by the camerlengo, the most important Vatican official until a new pope is elected. Spanish Cardinal Eduardo Martinez Somalo, 78, has been the camerlengo since 1993. Vatican flags fly at half-staff. According to tradition, the Bronze Door at St. Peter's Basilica is closed.

Mourning Period:
An official nine-day mourning period, known as the "novemdiales," follows the death of a pope. The tradition dates back to ancient Rome and a ceremony held nine days after death. The pope's body lies in state in St. Peter's Basilica in the Clementine Chapel, which was begun by Michelangelo and completed by Giacomo Della Porta for the Jubilee in 1600. After the death of John Paul I in 1978, an estimated 750,000 mourners filed past the body over three days. Many more could pay homage to John Paul II.

Funeral:
The funeral and burial must be held between the fourth and sixth day after death except for unspecified "special reasons," according to rules established in 1996. Weather permitting, it will be held in St. Peter's Square. Many of the world's leaders and other dignitaries are expected to attend.

Also on hand will be many of the Cardinals, who will select the new pope. During one part of the Mass, the ceremonial Swiss Guards, who wear distinctive purple-gold-and-red uniforms, kneel and dip their halberds with their right hand and salute with their left.

Burial:
Most popes in recent centuries have chosen to be buried beneath St. Peter's Basilica. After the funeral, their lead-lined coffins — which can weigh close to a half-ton — were carried through the "door of death" on the left side of the main altar in the basilica. A single bell is tolled.

The coffin is lowered into a marble sarcophagus and covered by a huge stone slab. The Vatican has not clarified whether Pope John Paul II seeks such a burial. There has been speculation that the Polish-born pontiff might have asked to be interned in Krakow's Wavel Cathedral alongside Polish royalty, although that is considered to be unlikely.

Conclave:
The Cardinals, the so-called "princes" of the church, gather to elect the new pope in the Sistine Chapel, whose frescoes include the famous ceiling by Michelangelo. The conclave, derived from the Latin words meaning "with a key," must begin no sooner than 15 days after the death of the pope and not more than 20.

In the past, the Cardinals resided in makeshift sleeping quarters. For this conclave, however, they will stay at St. Marthas House, a hotel-style guest facility within Vatican City. The rules of the conclave are strict: no outside contact until a pope is elected.

To counter modern eavesdropping devices, technicians will sweep the ancient halls and corridors for any telltale signs of surveillance. The cardinals file into the Sistine Chapel in their blood-red robes and conduct a private Mass before the voting begins.

The ballots are tied together by needle and thread and burned with chemicals to make the smoke white or black. White signals to the world that a new pontiff has been elected. Only cardinals under the age of 80 are allowed to vote. A conclave held now would have 117 papal electors. The election of John Paul II took two days and eight ballots.

The Next Pope:
John Paul II changed the rules to make a simple majority sufficient to elect a pope if no one gets the traditional two-thirds majority after 30 rounds of voting.

Once a new pope is elected, he must say "Accepto," or I accept, to make it official. A senior cardinal will then appear at the central window in St. Peter's Basilica and utter a sentence in Latin that ends with "Habemus papam" - "We have a pope." Then he will continue in Latin and announce the name chosen by the new pope.