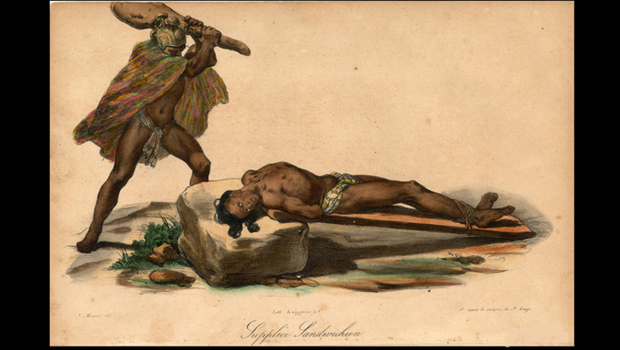 In ancient cultures, the poor lived on the razor's edge -- literally.

A new study shows that in societies where social hierarchies were taking shape, ritual human sacrifices targeted poor people, helping the powerful control the lower classes and keep them in their place.

According to Watts, a graduate student researching cultural evolution at the University of Auckland in New Zealand, ritualized killings in the name of religion date back at least 5,000 years, known from remains of human sacrifices buried near Egyptian emperors' tombs.

Evidence also hints that the practice was widespread, Watts told Live Science in an email.

"Human sacrifice was found in early human societies throughout the world (such as South America, Europe, the Middle East and Austronesia) long before cultures in these regions are known to have been in contact with one another," Watts said in the email. "This suggests that human sacrifice has independently arisen numerous times throughout human history."

A developing ruling class that was eager to cement control over the less fortunate likely drove, in part, the rise of human sacrifice, according to Watts.

The researchers investigated 93 traditional cultures identified as "Austronesian" -- a language family that originated in Taiwan and extended through parts of Southeast Asia, the Philippines, Madagascar, Malaysia and the Pacific Islands.

"In early Austronesian cultures, there was a great deal of overlap between religious and political authority," Watts told Live Science, with some cultures recognizing the ruling elite as descendants of the gods. "As such, the religious systems often favored social elites and reinforced their position," he said.

Of these cultures, 40 were known to practice some form of human sacrifice, which was carried out in a number of ways, according to the researchers. Victims might be drowned, burned, strangled, bludgeoned, cut to pieces, crushed under a newly built canoe, or rolled off the roof of a house before being decapitated.

But as much as the manner of their deaths might have varied, the victims had this much in common: They were typically of low social status. And the sacrifices were generally performed by people in an elevated class, such as a chief or high priest.

In fact, the study authors found that human sacrifice was more widely practiced in societies that were highly stratified -- with wide gulfs between the lower classes and the privileged -- finding records of human sacrifice in 67 percent of those types of societies.

However, they found that in societies where all members occupied a similar status, human sacrifices were less common, showing up in only 25 percent of egalitarian cultures.

"This highlights the potential dangers of religious and political overlap, and how religion can be used by social elites as a tool to maintain social control," Watts said. "Ritualized human sacrifice shows just how far this can go."

The findings were published online April 4 in the journal Nature.