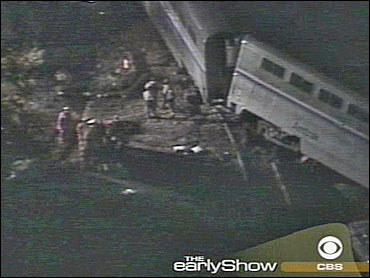 The train was moving slowly through a winding area near Blackwell, about 50 miles southwest of St. Louis, when it apparently struck the rockslide, Jefferson County Sheriff Glenn Boyer said Thursday. He described boulders about half the size of a car hood on the track.

"We're fortunate the engineer had to slow down," Boyer said. "It probably could have been a lot more serious."

The cause of the slide was not known, but the area had received about 1 ½ inches of rain earlier Wednesday.

The engine and its six passenger cars left the tracks.

While the engine ended up on its side (video)
, the slow speed may have prevented the cars from overturning, reports John Mills of CBS affiliate KMOV-TV.

The injured passengers were taken to a hospital while others were taken by bus to a firehouse in nearby De Soto to spend the night. Most of those injured suffered neck and back pain, Boyer said.

The National Transportation Safety Board planned to investigate.

Earlier Wednesday, a high-speed Amtrak Acela train plowed into a car at a crossing in Waterford, Conn., killing a woman and her 8-year-old grandson and critically injuring her 4-year-old granddaughter. The crash caused major delays along the Boston-to-Washington corridor.