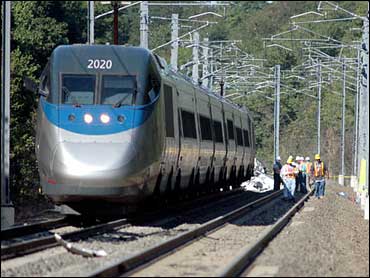 A high-speed passenger train collided Wednesday with a car at a crossing in eastern Connecticut, killing two people and causing major delays on the Northeast rail line.

The accident happened around 7:30 a.m. on the southbound tracks, said Tracy Connell, a spokeswoman for the national train service Amtrak. Video taken from a TV helicopter showed the engine of the train resting on wreckage of a white car.

An adult and child in the car were killed, said Paul Eccard, the town's first selectman. A second child was taken by helicopter to a hospital with serious injuries. The hospital would not release the child's condition.

Eccard did not say how old the children were, but said counselors were sent to a local preschool and elementary school.

None of the 130 passengers on the train was injured, Connell said.

Witnesses told police the gates at the crossing were working and down when the accident occurred, Eccard said. He said police had not determined how the car got onto the tracks.

The train is one of Amtrak's high-speed express Acela trains, and operates between Boston and Washington. The train can travel up to speeds of 120 mph, but goes much slower through Connecticut.

The rail line was shut down in the area while police and Amtrak officials investigated the crash. Connell said Amtrak expected significant delays between Boston and New York for most of the day.