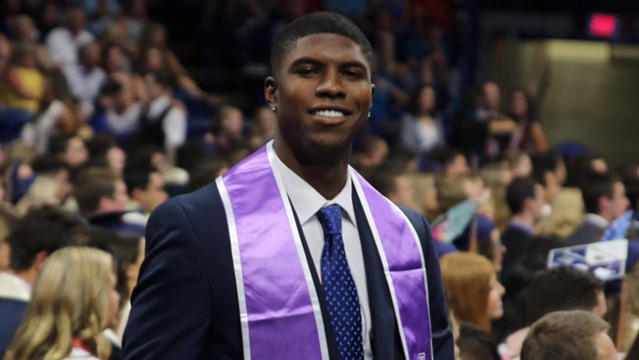 The parents of the young American beaten to death in Greece are speaking for the first time. Bakari Henderson died last month on the Greek island of Zakynthos. Surveillance video captured his final moments as a mob chased him out of a bar and surrounded him on the street.

Jill said "Bakari" meant "of noble promise," a name Henderson lived up to. "He was proud of it," she said.

Henderson showed plenty of promise as a recent graduate of the University of Arizona. At 22 years old, he had already traveled the world. Last month he was in Greece to get a new venture off the ground.

"He was there for a photo shoot for his new clothing line that he was launching," Jill said. "Phil had originally said, 'Well, maybe you should, you know, have a plan B.' And he said, 'Well, plan Bs are for people who aren't confident in their plan A.'"

Henderson, it seems, was up for a challenge.

Videos of Henderson jumping off a cliff and enjoying the beach were shot the day before his parents noticed a missed phone call in the middle of the night from the U.S. embassy.

"I was thinking maybe, 'Okay, you found his wallet. He's over there, and he's tryin' to get to another country. What's goin' on?' So, when I called and I'm hoping, because it's that night call, you know, you don't want, so I'm just hopin'," Phil said. "We prayed before we even called her back."

They prayed that Bakari was okay, he said.

But the news was devastating. Their youngest son had been killed after an altercation in a Serbian bar. A woman told authorities it started when she asked for a selfie with Henderson. She said a Serbian man asked her, "Why are you talking to a black guy?" before hitting Henderson in the face.

"Do you think this was a racially motivated incident? Or do you just think it was just something that was out of control, and he just happened to be the unlucky victim here?" King asked.

"How it started may not have started that way. It may have started out as an American issue, and then resulted in, you know, a black American tragedy," Jill said.

The Hendersons said their son was comfortable traveling around the world.

"Isn't that ironic, that he could say to you, 'I feel more comfortable in another country other than my own'?" King said.

"And he ends up losing his life in another country. For what reason, we still don't know exactly," King said.

Nine suspects face charges of voluntary manslaughter for the violent beating, which happened shortly after the attackers chased Henderson out of the bar. While Phil has looked at the footage from that night, Jill has chosen not to.

"I just want to keep his memory alive. I don't want to introduce any negativity into my spirit. And I really do want to remember him as a go-lucky, energetic, fun-loving, happy Bakari," Jill said. "I miss that about him. And I just miss his energy, his hugs, his laugh, his loud, boisterous laugh. I mean, his smile. Just everything."

"He just brightens up a room. I'm gonna miss -- his competitiveness," Phil said, choking up with emotion. "And whenever a sporting event come on, he calls. Boxing event, whatever it is, soccer -- he loved it. And I'm just going to miss that."

The whole family is feeling the void, including younger sister Jory and older brother P.J.

"I miss talking. Right now, we would be talking about the Cowboys and Eagles," P.J. said. "So it's going into football season without that is different. So, yeah, that's what -- right now is what I'm missing, just talking sports with him."

They took us to a mural an artist painted of Bakari, shaded in purple. His mom said it was his favorite color. It also coats the walls of his bedroom where they shared something special.

"This is a recording," Jill said -- a prayer Bakari led on a family phone call last June, asking God for health and peace around the world.

"I'd also like to pray for Donald Trump. Hopefully he can make our society a better place, not worse," Bakari could be heard saying.

Those words really resonate in this household, as his parents try to make sense of their son's brutal death.

"You know, I first thought, 'What parents would raise such barbarians to do such an evil thing to another human being?' And then the Holy Spirit just kind of spoke to me and said, 'You know what, it's bigger than that. It's so much bigger than that,'" Jill said. "Because the world that we live in today, our leaders sit back and they just almost condone this type of behavior. So they don't condemn it. And by their silence, they promote it. And so I think in order for us to move forward, we're gonna have to do better in general."

"We want justice for Bakari," Jill said. "Justice would mean to have everyone involved ... to be locked up, and hopefully for a very long time."

The family has hired a lawyer and said they plan to be there to represent their son when the case goes to trial. A pair of GoFundMe pages have raised more than $100,000 to cover their costs.

In the meantime, the Hendersons tell us they've heard nothing from members of Congress other than a single phone call from Sen. John Cornyn's office when trying to bring home Henderson's remains.

As for that clothing line Henderson was working on? His parents said they plan to launch it for him.