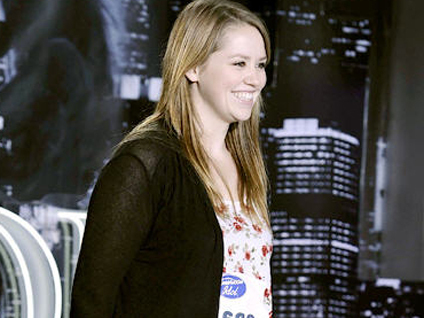 It wasn't so much that both NFL Championship games had been exhausting emotionally. It was that Steven Tyler had sung the national anthem at the AFC Championship game in a manner that might have frightened the Alien back into John Hurt's intestines.

This was the very same Tyler who was supposed to judge which singers ought to waft along to Hollywood. How would he know?

Tyler's judging style, though, largely depends on him looking as fey as possible and offering lecherous leers at any female contestant who happens to make his pupils dilate. Last Thursday, the producers had edited out his, well, bulging eyes. However, when it came to last night's auditions, who knew what might occur?

Reflecting America's strange harmonizing of sports and the military, the auditions occurred on the USS Midway, docked in San Diego. Who would dare sing the Village People's "In The Navy"? Would it be a case of Don't Sing, Don't Tell?

The first auditioner claimed she was all-American. She was all the American, surely, that Tyler desired. For she was wearing a bikini top and denim shorts that were tighter than a forehead after Botox. An American flag stuck proudly to her right buttock.

Tyler, wearing an old flying cap and goggles, immediately lowered his goggles in order to inspect her credentials.

Jennifer Diley - for this was her name - was a little muted when she opened her mouth.

"I think your voice lacks some power that your get-up has," mused a suddenly sanguine Tyler.

Diley tried to sing Mariah Carey's "Hero." It would not have won her a Purple Heart.

Ashley Robles came dressed for work. She has a 5-year-old daughter. She once had five jobs at the same time. She sang so well that Tyler didn't have time to offer some dribbling, drooling, demeaning drivel.

Just as on Thursday, there was a vast parade of applicants who were deemed to be Hollywood-worthy. Just as on Thursday, we were shown no insane, panty-dropping, chest-baring lunatics. This was clearly a new producer tactic. They were leading us to believe that, in an election year, America was suddenly sane.

Aubree Dieckmeyer somehow believed she was auditioning for "America's Next Top Model." At least that's what she said. This was odd, as she offered a passable Michael Buble and he would have little chance, one imagines, of impressing Tyra Banks. At least with his figure.

Next was a girl who claimed that her first two kisses had been donated to her by Mike Posner and Usher. Oh, and she'd also been on "The Ellen DeGeneres Show," after she'd written the former "Idol" judge a song.

Whom had the producers hired to find these people? Turtle from "Entourage"?

Ali Shields has an interesting bearing. It seems to take some, well, bearing. She decided to offer some white girl rap. Within two seconds, Randy Jackson was laughing. And then she sang some Corinne Bailey Rae and, gosh, golly, it sounded bizarrely authentic. Oh, those canny producers. Just when we thought someone nutty had slipped onto our screens.

Somehow, this just wasn't going to happen. Cal student Kyle Crews cruised through. "The best male voice we've heard yet," said Tyler of Crews' rendition of "Angel of Mine."

Still, Tyler was focused enough to notice that Crews was dressed like a typical Cal student. "You're going to have to lose that shirt," he told him.

And then Jim Carrey's daughter turned up. No, really. Jane Carrey's a mom. She's rather nice. She can sing a little too. Did they let her through? Would this make great TV? What do you think? And, yes, she called her dad on camera.

Finally, Wolf turned up with his git-fiddle. This would be what you might call a guitar. His late father made it for him. After a muted a capella muttering of some Creedence Clearwater Revival ditty, he strummed the git-fiddle and offered something a little different. I'm not sure what it might have been. But it definitely wasn't Scotty McCreery.

Another 53 hopefuls were admitted to the purgatory of Hollywood after their sing-and-tell with the "Idol" sailors. At this rate, the producers will be having to rent several Best Westerns to house them all.