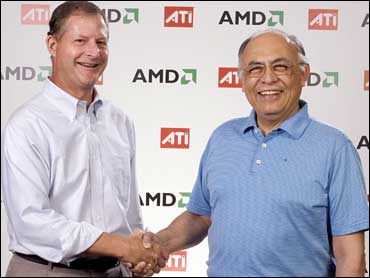 Advanced Micro Devices Inc. plans to pay $5.4 billion for top graphics chipmaker ATI Technologies Inc., a bold move that could help the world's No. 2 maker of PC microprocessors match — or even exceed — the capabilities of larger rival Intel Corp.

The acquisition would instantly turn AMD into a leading supplier of graphics chips, which render images for computer games and Internet video, and so-called chipsets, which connect a PC's processor to other system components. Intel, which in the past year has lost ground in microprocessors to AMD but is showing renewed vigor, has long supplied both.

The acquisition of ATI "would make AMD a bigger player with a more diversified portfolio," said Nathan Brookwood, an analyst with research firm Insight 64. It "would certainly put AMD on a more equal footing relative to Intel."

Markham, Ontario-based ATI, which also supplies semiconductors used in cell phones and high-definition TVs, will also help AMD expand its reach into consumer products, executives said. Intel, which recently sold a division that makes chips for handheld devices, has been trying to break into those markets for years, with limited success.

Under terms approved unanimously by both companies' boards of directors, Sunnyvale, Calif.-based AMD will pay $4.2 billion in cash and 57 million shares of its own stock to acquire all of ATI's outstanding stock, the companies said on a conference call with analysts.

The deal, which is subject to approval by ATI shareholders and U.S. and Canadian regulators, is expected to be completed by year's end, AMD executives said.

Based on AMD's closing share price of $18.21 on Friday, the deal valued ATI's shares at $20.47, a premium of almost 24 percent compared with ATI's Friday's closing price of $16.56 on the Nasdaq Stock Market.

AMD, which has been shelling out billions of dollars to add factory capacity so it can better compete with Santa Clara, Calif.-based Intel, will pay for the acquisition with the help of a $2.5 billion loan from Morgan Stanley.

AMD expects the acquisition to contribute "slightly" to earnings next year and "meaningfully" to 2008 profit, Bob Rivet, AMD's chief financial officer said, without adding more detail. The purchase will save the combined company about $75 million by the end of 2007 and about $125 million by 2008, not including costs for the acquisition, he said.

By having more chip categories in its portfolio, AMD wants to offer packages that bundle microprocessors with other types of computer components. Platforms that integrate the functions of several different chips will be more attractive to many customers than offering each component separately and requiring customers to put them together, Ruiz said.

AMD, which over the past year has taken about 5 points of market share from Intel, is betting the strategy will allow it to gain even more share, particularly in the market for notebook computers, AMD executives said. One percentage point of share translates to about $300 million of revenue.

The deal also puts competitive pressure on Nvidia Corp., the other dominant maker of graphics chips. Santa Clara-based Nvidia has competed against Intel in selling chipsets and graphics chips while counting on AMD for sales of those products.