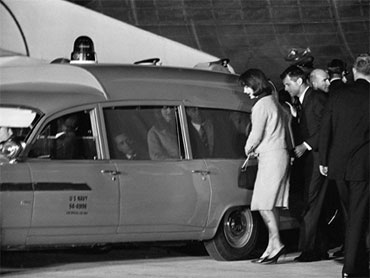 Those interested in owning a piece of history from John F. Kennedy's presidency now have the chance: the ambulance that carried his body as it arrived from Dallas to Andrews Air Force Base in Maryland will be up for auction.

The battleship gray 1963 Pontiac Bonneville will be on sale at Barrett-Jackson's Scottsdale, Ariz. auction, which takes place between Jan. 17 and Jan. 23 at WestWorld of Scottsdale.

"Not only did the ambulance transport JFK following his untimely death, it's one of the finest examples of an un-restored ambulance from that time period," stated Steve Davis, president of Barrett-Jackson. "It's also, without a doubt, one of the most significant and historical vehicles ever offered for sale."

The ambulance, built in June 1963, was one of only 15 contracted for military use. After its naval service, the ambulance was sold as surplus, winning the Gold Award at the 2010 Military Vehicle Preservation Association National Convention. The vehicle remains in its original condition, complete with a stretcher, jump seats and two oxygen tanks.

Since the ambulance is being sold with no reserve, and given its unique history, it's difficult to estimate its value, reports Fox News. A Lincoln limousine used at the Kennedy White House was auctioned for $390,000 in Calif. last Aug.

Correction: CBS News originally reported the coffin had a flag draped over it. File footage of the event shows it did not. We regret the error.