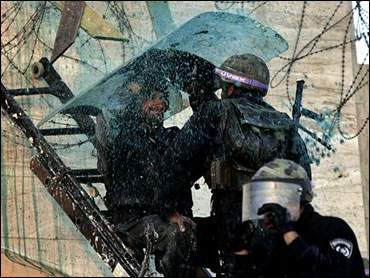 New fears of inflation after a report the economy isn't slowing, it's growing, and at a rate of 5.2 percent in the second quarter, up from 4.8 percent in the first. On that news, the Nasdaq fell another 179 points Friday, for the second-biggest weekly point-loss ever.

It was once the glittering prize in the e-commerce gold rush, but now Wall Street's love affair with Amazon may be over. Founder Jeff Bezos, who's vowed to make Amazon the Walmart of the Web, is still trying to make a profit.

Now, after a bleak week that saw Amazon stock price slide 27 percent, Bezos' chief deputy, Joe Galli, abruptly up and quit to join another Internet company. It's not a good sign.

"Well, it's never a good sign when your president resigns a day before earnings," comments Mark Rowen, a market analyst at Prudential.

Rowen was one of a handful of once-bullish analysts who stripped a buy rating off the stock, which is now down 73 percent from its 52-week high. "The truth is, nothing goes from a small business to an extremely large business without any hiccups," Rowan says. "And I think we're seeing a hiccup at Amazon. Now it may last for awhile."

Growth hasn't been the problem for Amazon. The company sold 400,000 copies of the new Harry Potter book this month. But it promised free Federal Express shipping to get those orders. Founder Jeff Bezos is under icreasing pressure to show a profit. According to Rowan, "If things don't turn around a year from now, I think the whole company could be in danger, not just his leadership."

Answering critics who say the e-commerce giant will run out of money before the end of the year, Amazon said it has $908 million on hand.

Still, the company has lost $16 billion of its market value since the beginning of the year. For Amazon, the Tarzan of the Internet, it's suddenly a jungle out there.