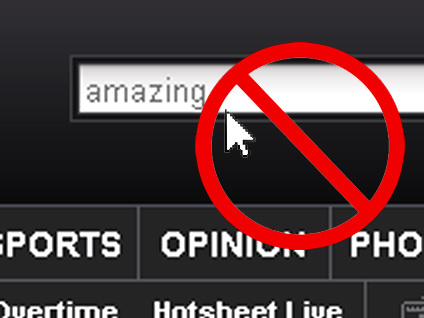 DETROIT — Before passing comment on someone's "baby bump," take a pregnant pause. Likewise, give up promoting "shared sacrifice." And if you're tempted to proclaim your desire to "win the future," you've lost it here in the present.

Michigan's Lake Superior State University is featuring those phrases in its annual List of Words Banished from the Queen's English for Misuse, Overuse and General Uselessness. The 2012 list, released Friday, was compiled by the university from nominations submitted from across the globe.

What else do the syntactical Scrooges want to cast out with the good cheer in the new year? The list also includes "occupy," "ginormous," "man cave" and "the new normal."

In all, a dozen words or phrases made the 37th end-of-the year list. The list started as a publicity ploy by the school's public relations department on New Year's Day 1976, and has since generated tens of thousands of nominations.

"Amazing" received more than 1,500 nominations, the most of any on this year's list. Disdain for the superlative was apparently universal among English speakers, garnering disparaging dispatches from across the United States and even the United Kingdom and Israel.

While it lacked a single pop-culture culprit, such as the proliferating protest movement that occupied the word "occupy" or the collective ooh-ing and aah-ing that accompanied Beyonce's "baby bump," nominations to banish "amazing" cite its overuse on reality television and by daytime talk show hosts. Social media also spurred the call to surrender the word's conversational credentials, notably through a Facebook page called "Overuse of the Word Amazing."

"The word has been overused to describe things only slightly better than mundane," Alyce-Mae Alexander of Maitland, Fla., wrote in her nomination. "I blame Martha Stewart because to her, EVERYTHING is amazing!"

University spokesman John Shibley said he and his colleagues were surprised that "amazing" hadn't already graced the archive of about 900 banished words.

"The simple ones are always the ones that get through the cracks — until this year," he said.

Other terms circulating for years that have finally raised enough ire to earn a spot on the list include "blowback," "man cave," "the new normal" and "thank you in advance." The last one particularly annoys Mike Cloran of Cincinnati, Ohio.

"This is a condescending and challenging way to say, `Since I already thanked you, you have to do this,"' Cloran wrote in his submission.

Lake Superior State University, located in Sault St. Marie — the last stop before Michigan's northernmost border-crossing with Canada — has seen its list survive despite many banished words stubbornly clinging to the language. For evidence, look no further than last year's "fail," "viral" and "a-ha moment." And then there is, well, blowback from critics who can't take a little tongue-in-cheek critique.

Shibley said some people have missed the point over the years and complained that the list is an effort to control the language. But most seem to receive it in good cheer, rather than with jeers.

Joe Pesci says he got "serious burns" to his head in "Home Alone"
Thanks for reading CBS NEWS.
Create your free account or log in
for more features.
View CBS News In
CBS News App Open
Chrome Safari Continue
Be the first to know
Get browser notifications for breaking news, live events, and exclusive reporting.