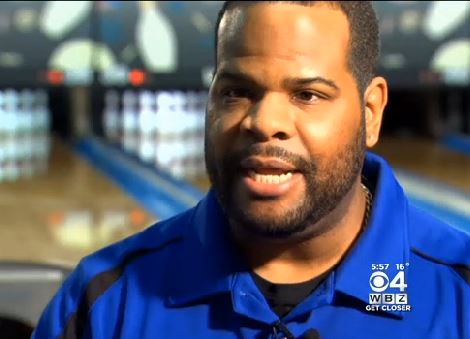 When Hakim Emmanuel lined up his 36th and final ball of the night, all other activity at the Westgate Lanes in Brockton, Massachusetts, had stopped.

"They were like, 'This guy has a shot at a perfect series,'" Emmanuel said. "It was so quiet you could hear a needle drop. That's when you get nervous yourself. You know everyone's watching you."

Emmanuel delivered another strike to complete his third perfect game in a row - the 27th 900 series on record, according to the U.S. Bowling Congress. Since then he's been the guest on bowling call-in shows, and the video of his final strike has been linked to by ESPN and Sports Illustrated and viewed on YouTube more than 75,000 times.

"Hakim treated those pins like they were the Washington Generals," said Big Easy Lofton, a member of the Harlem Globetrotters, who announced that Emmanuel will receive a "Trotter Tribute" - the first bowler so honored - and invited him to be a special guest at their game in Boston next month.

A 900 series in bowling is about as common as a perfect game in baseball, except even a pitcher can get away with a bad pitch or two. Even one 300 game is comparable in frequency to a hole-in-one, though the golfing feat has a degree of luck that the bowling accomplishment doesn't.

A 38-year-old right-hander who played defensive line at Foxborough High School, Emmanuel had never completed a 300 game before.

He felt the pressure mounting as he finished off his first.

Then he did it twice more.

"I usually always somehow blow it in the 10th frame. I couldn't ever get that 300 game. I ended up getting it. Next thing you know, I get another and the next," he said. "You know that it could either make or break you. You could throw that 899 or 898 and you walk away as the guy that didn't do it.

"Second place usually is not a winner," he said. "This goes down in the record books."

Jason Overstreet, the USBC's deputy executive director, said Emmanuel's feat will be in the books once the local association files the paperwork.

Once the accomplishment is verified by the USBC, Hakim will get a 900 Series gold ring, reports CBS Boston.

"The Super Bowl of bowling," he said.

He plans to go out on the amateur bowling circuit and who knows, maybe he'll turn pro.