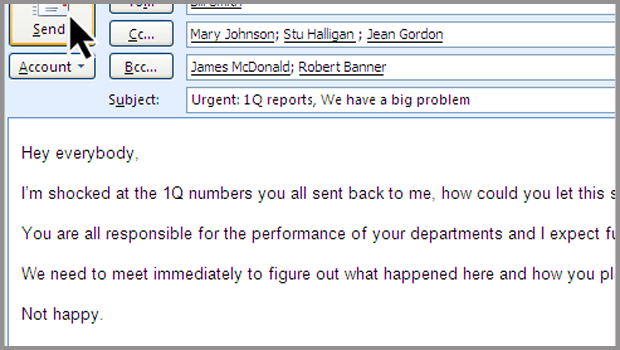 I like to think I have a solid set of virtues, but patience isn't one of them. I tend to react to things quickly, expect others to react just as quickly and always want things to happen faster than they do (or perhaps should). It's on my short list of things I wish I could change about myself. Although sometimes it pays off -- especially when my "gut" is good -- there are at least as many times when counting to 10, or sleeping on something, or doing nothing at all, would have been the better call.

Lately I've been trying to take baby steps in addressing my restless, impulsive nature. As part of that effort, I am focusing on specific instances where there is rarely anything to lose -- and often much to gain -- by slowing down and thinking twice (or three times, or 10) before acting or reacting. If you're quick to pull the trigger like me, consider taking a pause before doing these things:

Hitting the "send" button: Email and other messaging may be third only to breathing and blinking in the list of things we do all day. Instant communication can be our best, most efficient friend, or our worst, most time-wasting enemy. We can reach out or respond to an unlimited number of people in near real-time, without the fuss and muss of actually speaking to them. Trouble is, it's too fast and easy, and we often shoot first and think later. Tone, spirit and context can be lost or misinterpreted in electronic messages, and we've all experienced that sinking feeling that comes with wishing we could un-send an email for one reason or another.

Same goes for cc/bcc and the dreaded "reply all": If you are copying someone, make sure there's a reason to do so. At a minimum, reckless copying can be disrespectful of other people's time; but it can also lead to embarrassment or worse ("Sorry, I meant to copy the other John.... please unread and delete what I just said about you. Damned autocomplete.") Odds are you copy more people, more often, than you really should.

One tool for avoiding email regret is the delayed delivery option, although most of us want our messages sent when we send them (and often they need to be), and even the patient among us don't usually have the patience to deal with that. So what I've been doing more and more is simply leaving messages in my draft folder if I'm not positive that I want or need to send them. I usually find myself deleting them a little while later, which is slowly leading to writing fewer of them to begin with.

Losing your cool: We all know that business isn't supposed to be emotional, but we're human, and that notion isn't always realistic. Happiness is an emotion, and we're very happy when we get a big order or a raise, so it's unreasonable to expect all other emotions to be suppressed in our professional lives. But happiness rarely does any damage, while feelings at the other end of the spectrum can do plenty. It is fine to feel upset, angry or resentful -- it's just not OK to act that way at work.

If you think you're going to lose it, it's critical that you defuse yourself. Walk away, take a few breaths, consider whatever the situation is with a clear head. Recognize that nothing good ever comes out of displays of anger in business, and figure out how to address the matter without the drama. Like that questionable email message, put your anger in a "folder" and see if you really want to deliver it later. Hopefully (and most likely) you won't.

Making decisions too quickly: Much like the electronic messaging challenge, it sometimes seems like our entire business lives require instant reaction. We often work on too many things at once and are prone to being distracted, which can lead to decisions and responses that may not be as considered as they should be. There are certainly situations that require immediate action, but there are many more that don't. Whether it's a negotiation, a personnel issue, a policy matter or an extraordinary customer request, don't approve or reject things too quickly just to get them out of the way, or because you feel pressured. You are probably acting in real time more often than you need to; if a decision merits taking some thinking time, take it.

Spending money: When you're thinking it's no big deal to buy that seemingly inexpensive thing for your office, or that monthly membership to something that seems like a good idea at the time, or that latest-and-greatest piece of equipment for your shop, put your checkbook or credit card down and think some more. What will this purchase do for your business? Will it contribute to results? Will you be glad you bought it down the road? Is there anything more important you could do with that money (including not spending it)? Is it a need or a want?

Whether you run a mom-and-pop shop or a huge corporation, expenses matter. But for small business owners, it is particularly vital to realize that every penny counts. Every single one. And little ones add up, sometimes blindsiding us at year-end, so think twice before you spend.

I'm making progress in my efforts to address these things, and more. And while I still make decisions and act quickly, I've become more aware and appreciative of the fact that there is often more value -- or less downside -- in deciding to do nothing.