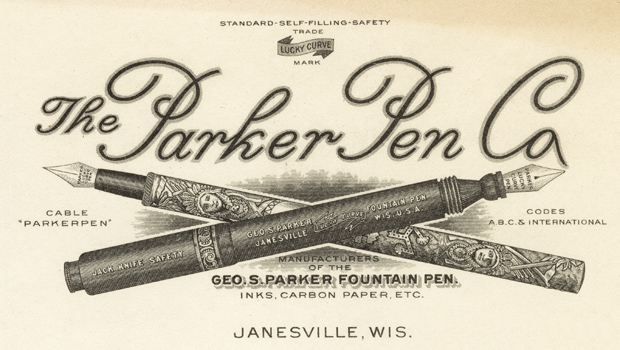 For that was the day the future fountain pen magnate George S. Parker was born in Shullsburg, Wisconsin.

Annoyed by fountain pens that leaked, young Parker began to design his own.

He founded the Parker Pen Company in Janesville, Wisconsin, in 1888 at the age of 25 ... and won his first patent the very next year.

Many other non-leak designs were to follow, and Parker became one of the world's largest pen manufacturers.

For years it was a family affair. Witness this photo of Parker and his son, Kenneth, posing with the company's sales force along with the Parker Pen band in 1925.

An aviation enthusiast, Parker even had a plane decked out in the colors of his Duofold model pen.

George Parker died in 1937 at the age of 73 ... but his pens lived on. They were even used to sign both the German and the Japanese surrenders at the end of World War II.

In recent years, Parker Pens has gone through a series of ownership changes and relocations. In 2009, the company announced it was closing its Janesville plant.

Still, at least one Parker legacy remains in Parker Pens' hometown: A six-bedroom brick home that once belonged to the Parker family was purchased in 2010 by the local congressman: Paul Ryan ... who was elected just this past week as Speaker of the House.

Trevor Noah: Finding humor in the darkest of times