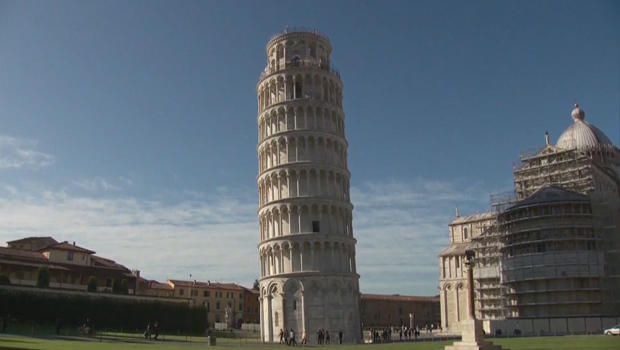 On December 15, 2001, one of the world's most recognizable and beloved landmarks received a "realignment" – for that was the day Italy's renowned Leaning Tower of Pisa reopened to the public after an 11-year renovation.

Analysts had determined that, after more than 800 years, the tower was at a sort of tipping point, that its famous lean was a lot more hazardous than many suspected.

Engineer John Burland sounded the alarm to CBS News' Allen Pizzey: "The masonry in the tower, particularly on the leaning side, the south side, is very fragile. Very high forces in it. And that could explode at any time."

"It could literally go bang! and blow up."

Engineers faced the daunting task of fortifying the tower's fragile structure while maintaining its signature slant.

When they weren't busy "striking a pose," tourists had mixed success suggesting a strategy of their own:

"Push it?" suggested one woman

"Something to balance it out this way, you know?" suggested another.

One man offered, "Lift it up from underneath?"

"I really wouldn't know where to begin," was another man's opinion.

In the end, engineers employed a complex array of drills, weights and cables to reduce the tower's 15-foot tilt by about 17 inches, or one-half of one degree, keeping the all-important tilt intact.

And if the job's $25 million price tag seems a little steep for a seemingly minor repair, well, perhaps CBS newsman Winston Burdett put it best in his 1972 report:

"The lean, of course, is essential," he said. "If you take the lean from the Leaning Tower, how many people will still come here to see it?"

Note: The Leaning Tower of Pisa has a "body double" located in Niles, Illinois, a suburb of Chicago. It's half the size of the real tower. In 1991, Pisa became the sister city of Niles.