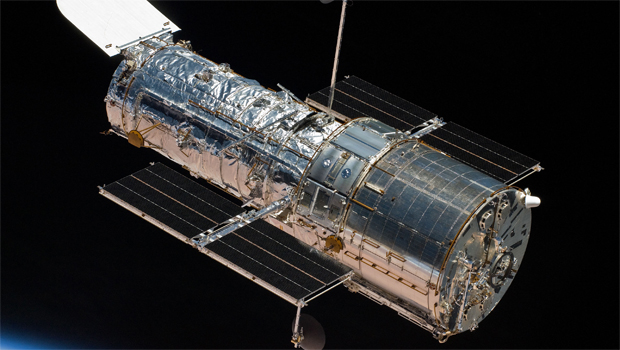 And now a page from our "Sunday Morning" Almanac: April 24th, 1990, 26 years ago today ... the day the Hubble Space Telescope was lifted into orbit on board the space shuttle Discovery.

Named for astronomer Edwin Hubble, the telescope was designed to peer deep into space, avoiding distortions the atmosphere imposes on Earth-bound telescopes.

But from the beginning there was trouble -- "Hubble Trouble," as the headline writers put it. Flaws in the telescope's nearly eight-foot-wide mirror created distortions. The result: "Fuzzy vision," as Dan Rather reported.

Facing criticism and even ridicule, NASA scrambled to create corrective devices -- glasses, as it were -- for the telescope's mirror.

Astronauts installed them during a mission in late 1993, a kind of orbital optometrist visit.

Hobbled no longer, the Hubble has been producing breathtaking images ever since ... looking across both distance and time to show us the universe as it was billions of years ago.

Not that time is standing still for NASA. It plans to launch a successor telescope in 2018, named for former NASA administrator James Webb.

With a far larger mirror divided into hexagonal segments, and positioned much further out into space, the James Webb Space Telescope promises our best view yet of the Greatest Show NOT on Earth.