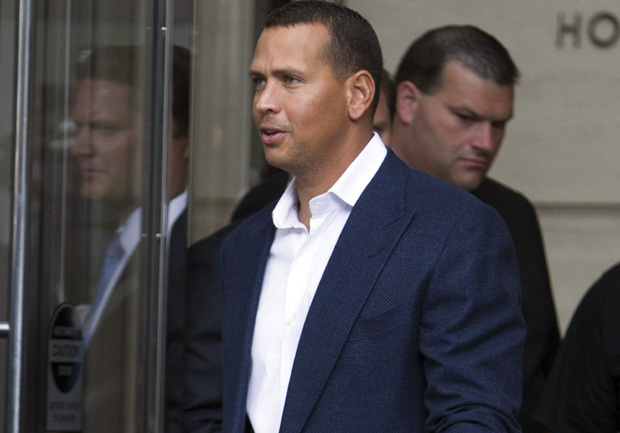 Three-time Most Valuable Player Alex Rodriguez has been suspended through the 2014 season while 12 other players have accepted 50-game bans as part of Major League Baseball's most sweeping drug scandal punishment.

In a statement, MLB said Rodriguez's drug ban was for "his use and possession of numerous forms of prohibited performance-enhancing substances, including testosterone and human growth hormone over the course of multiple years."

"I am disappointed with the penalty and intend to appeal and fight this through the process," Rodriguez in a statement after the suspension was handed down. "I am eager to get back on the field and be with my teammates in Chicago tonight. I want to thank my family, friends and fans who have stood by my side through all this."

He told reporters Monday night that the past seven months have been a "nightmare," but declined to answer questions specifically about his guilt or innocence.

Earlier, CBSSports.com's Jon Heyman reported that A-Rod planned to play Monday night for the Yankees against the White Sox.

In its statement, MLB also accused Rodriguez of "attempting to cover-up his violations ... by engaging in a course of conduct intended to obstruct and frustrate the Office of the Commissioner's investigation."

Rodriguez, 38, was one of 13 players suspended by the league Monday for their links to Biogenesis, a now-defunct clinic accused of distributing banned performance-enhancing drugs to athletes across several professional sports.

Nelson Cruz of the Rangers, Jhonny Peralta of the Tigers and Everth Cabrera of the Padres - all 2013 All-Stars - accepted 50-game suspensions without appeal.

A-Rod, who has been rehabbing from hip surgery and quadriceps injury and hasn't played since his dismal performance in the playoffs last October, is still owed $86 million for the final four years of his contract with the Bronx Bombers. He is the highest paid player in professional baseball.

AsCBS News correspondent Don Dahler reported, an arbitrator would have 25 days to rule on A-Rod's appeal, and the evidence against the player would be made public. However, the appeal schedule can be altered by agreement of management and the union. If the suspension ultimately stands, he will lose around $34 million in salary.

In a statement, the players' association said it supported the 12 suspensions that were accepted but said it agreed with Rodriguez's decision to fight his ban.

"We believe that the Commissioner has not acted appropriately under the Basic Agreement," MLBPA Executive Director Michael Weiner said. "Mr. Rodriguez knows that the union, consistent with its history, will defend his rights vigorously."

A-Rod has seen both cheers and jeers since joining the Yankees in 2004. He put up monster numbers in several seasons - winning two MVP awards while in pinstripes. In 2007, he signed a 10-year, $275 million contract and two years later, he led the Bronx Bombers to their 27thWorld Series title -the first championship of his career.

But since than that championship year, A-Rod has been downright awful in October, going 12 for 75 (.160) with zero home runs in the past three postseasons. Furthermore, he admitted that he used PEDs while playing with Texas a decade earlier, incurring the wrath of many fans and baseball writers.

Still, unless he decides not to appeal, Rodriguez was due to return to the Yankees lineup Monday night when New York plays at the Chicago White Sox.

"We felt he was ready to be in the lineup," Yankees manager Joe Girardi said Monday.

Girardi also told reporters the controversy is obviously a "black eye" for the team, but added there was some optimism to be had.

"It's really good that Major League Baseball and the union are working together to try to clean this up," he said.

Rodriguez finished a brief minor league injury rehab assignment on Saturday night at Double-A Trenton. After Friday night's game, A-Rod suggested the league and the Yankees were conspiring to thwart his return to the big leagues.

"There is more than one party that benefits from me not ever stepping back on the field. And that's not my teammates and it's not the Yankee fans," he said. "When all this stuff is going on in the background and people are finding creative ways to cancel your contract and stuff like that, I think that's concerning for me."

On Monday, after Rodriguez was suspended, the Yankees denied manipulating the investigation in any way.

"The New York Yankees in no way instituted and/or assisted MLB in the direction of this investigation; or used the investigation as an attempt to avoid its responsibilities under a player contract; or did its medical staff fail to provide the appropriate standard of care to Alex Rodriguez," the team said in a statement.

MLB reportedly shut down negotiations because of the comments.

"It's not surprising he's chosen to drag everyone through the mud," a league official told the New York Daily News. "In everything he said, he's been all over the page, accusing everyone of everything and coming off as so disingenuous. How can you possibly make deals with somebody like this?"

"This is a guy who would then be 40 years old, having had two hip surgeries, so it's highly unlikely that he could ever even think about playing again," Madden said.

Despite his tarnished reputation, Rodriguez is one of the most prolific hitters in baseball history: The three-time MVP has hit 647 home runs (fifth on the all-time list) and his 1,950 runs batted in rank seventh all-time. He has led the American League in home runs five times and was the 1996 AL batting champ.

In July, Milwaukee outfielder Ryan Braun, who won the 2011 NL MVP, agreed to a 65-game ban through the rest of the 2013 season for his role with the clinic. Last year, the Brewers slugger had been given a 50-game suspension for testing positive for elevated testosterone - but it was overturned because of a technicality with the handling of the urine sample.

According to the Associated Press, there have been 43 suspensions under the major league drug agreement since testing with penalties for first offenses started in 2005. The longest penalty served has been a 100-game suspension by San Francisco pitcher Guillermo Mota, who twice tested positive for PEDs.