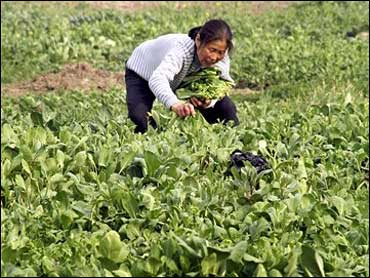 Yet, it took a much more obscure item, contaminated wheat gluten, to focus U.S. public attention on a very real and frightening fact: China's chronic food safety woes are now an international concern.

In recent weeks, scores of cats and dogs in America have died of kidney failure blamed on eating pet food containing gluten from China that was tainted with melamine, a chemical used in plastics, fertilizers and flame retardants. While humans aren't believed at risk, the incident has sharpened concerns over China's food exports and the limited ability of U.S. inspectors to catch problem shipments.

While the public was focused on the danger to their pets, sources tell CBS News that the FDA had tracked at least one suspect batch of wheat gluten into the human food supply, quietly quarantined some products and notified the Centers For Disease Control and Prevention to watch for new patients admitted to hospitals with renal or kidney failure.

At least 9 killed in shooting at Russian high school

Just as with manufactured goods, exports of meat, produce, and processed foods from China have soared in recent years, prompting outcries from foreign farm sectors that are feeling pinched by low Chinese prices.

Worried about losing access to foreign markets and stung by tainted food products scandals at home, China has in recent years tried to improve inspections, with limited success.

The problems the government faces are legion. Pesticides and chemical fertilizers are used in excess to boost yields while harmful antibiotics are widely administered to control disease in seafood and livestock. Rampant industrial pollution risks introducing heavy metals into the food chain.

Farmers have used cancer-causing industrial dye Sudan Red to boost the value of their eggs and fed an asthma medication to pigs to produce leaner meat. In a case that galvanized the public's and government's attention, shoddy infant formula with little or no nutritional value has been blamed for causing severe malnutrition in hundreds of babies and killing at least 12.

China's Health Ministry reported almost 34,000 food-related illnesses in 2005, with spoiled food accounting for the largest number, followed by poisonous plants or animals and use of agricultural chemicals.

With China increasingly intertwined in global trade, Chinese exporters are paying a price for unsafe practices. Excessive antibiotic or pesticide residues have caused bans in Europe and Japan on Chinese shrimp, honey and other products. Hong Kong blocked imports of turbot last year after inspectors found traces of malachite green, a possibly cancer-causing chemical used to treat fungal infections, in some fish.

One source of the problem is China's fractured farming sector, comprised of small landholdings which make regulation difficult, experts said.

Small farms ship to market with little documentation. Testing of the safety and purity of farm products such as milk is often haphazard, hampered by fuzzy lines of authority among regulators. Only about 6 percent of agricultural products were considered pollution-free in 2005, while safer, better quality food officially stamped as "green" accounts for just 1 percent of the total, according to figures compiled by the U.S. Department of Agriculture.

For foreign importers, the answer is to know your suppliers and test thoroughly, food industry experts said.

"You just have to hope that your system is strong enough and your producers are careful enough," said Todd Meyer, China director for the U.S. Grains Council.

Health Ministry officials acknowledge problems, but have described scandals such as the 2004 baby formula deaths as isolated incidents. Neither the ministry nor the State Administration of Quality Supervision, Inspection and Quarantine, responsible for overall food safety standards, responded to questions submitted to them in writing as requested.

Over the past 25 years, Chinese agricultural exports to the U.S. surged nearly 20-fold to US$2.26 billion last year, led by poultry products, sausage casings, shellfish, spices and apple juice.

Inspectors from the U.S. Food and Drug Administration are able to inspect only a tiny percentage of the millions of shipments that enter the U.S. each year.

Even so, shipments from China were rejected at the rate of about 200 per month this year, the largest from any country, compared to about 18 for Thailand, and 35 for Italy, also big exporters to the U.S., according to data posted on the FDA's Web site.

Chinese products are bounced for containing pesticides, antibiotics and other potentially harmful chemicals, and false or incomplete labeling that sometimes omits the producer's name.

To protect its foreign markets, China is trying to set up a dedicated export supply chain, sealed off from the domestic market, said Keyzer. Systems for tracking and tracing vegetables have been set up, although doing so for meat products is harder, he said.

Large producers targeting foreign markets have also moved to gain greater control over supplies by expanding their operations instead of buying from individual farmers.

The tainted pet food scandal is likely to increase this momentum. More than 100 brands of pet foods and treats have been recalled, one of the largest pet food recalls in history. Menu Foods was the first of at least six companies to recall pet food, beginning in mid-March, after reported cases of cats and dogs developing kidney failure after eating the affected products.

How the contaminated wheat gluten got into the product cycle is not yet known. The gluten was traced to a company outside Shanghai, Xuzhou Anying Biologic Technology Development Co.

The company and the government's inspection and quarantine administration are investigating. But a company sales manager, Geng Xiujuan, said Xuzhou Anying was only a middleman, buying the gluten, commonly used as a thickener in pet food, from companies in neighboring provinces and selling it to a separate trading company.

While no investigation results have been announced, industry experts said they suspect the gluten might have been contaminated by having been processed or stored in machines or containers also used for melamine. Such anomalies show just how difficult it is to ensure purity, they said.

"It's just really hard to test for everything," Meyer said.