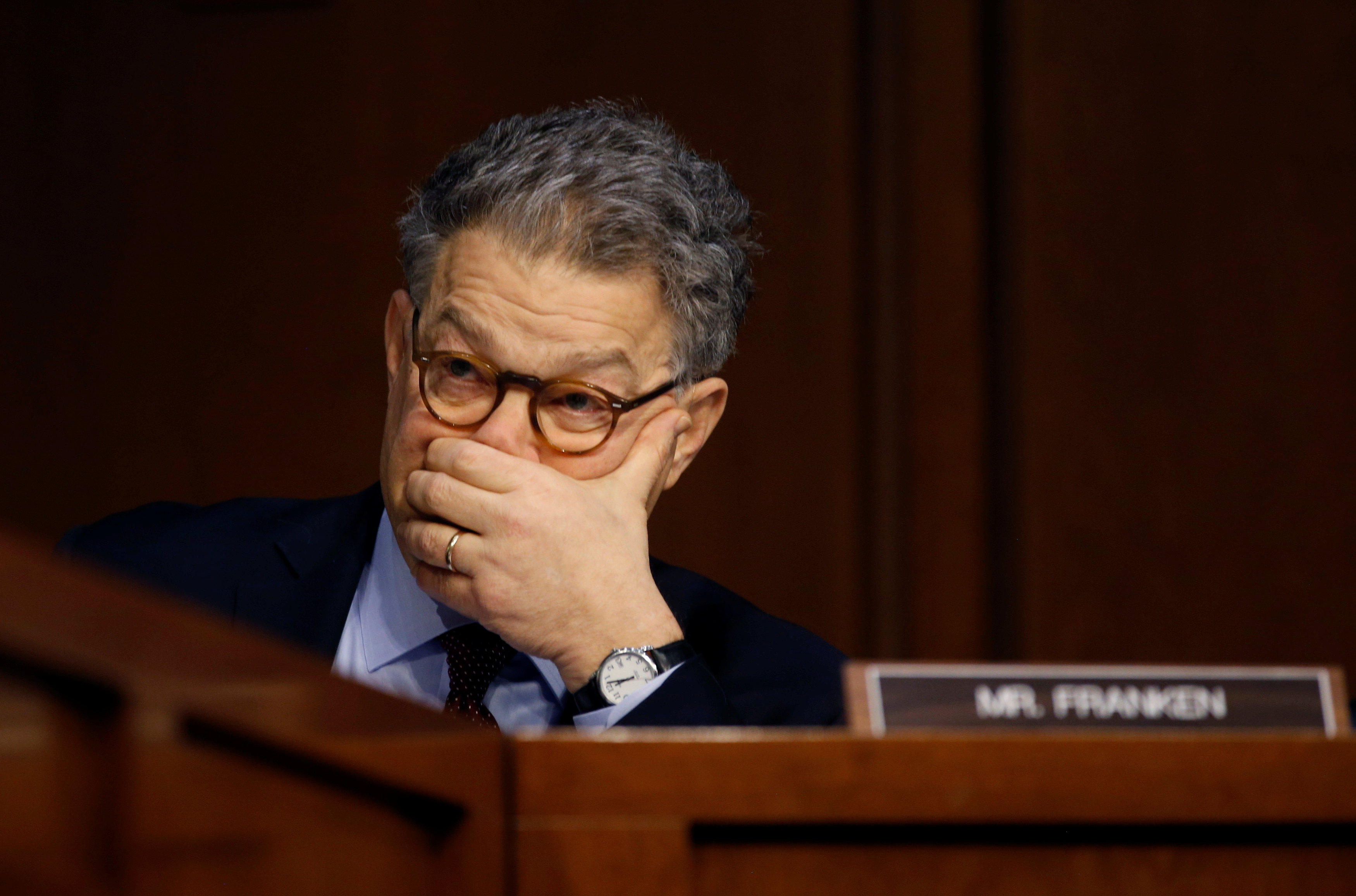 WASHINGTON -- "Many of you have jobs, many of you have families," Sen. Al Franken told Democratic leaders gathered on the eve of a hotly contested governor's election in Virginia. After an expectant pause, he leaned into the microphone and added, "Ignore them."

Franken was jokingly beseeching activists to get out the vote the following day, in what ended up as a surprisingly decisive victory for Democratic candidate Ralph Northam. But the moment, barely two weeks ago, also underscored how high the one-time "Saturday Night Live" comic had risen in his party's firmament.

After spending much of his nearly nine years as senator trying to shed his funnyman image and quietly digging into issues like internet access and consumer protection, he was now a draw at political events and mentioned by some as a 2020 presidential possibility. Months of savaging some of President Donald Trump's appointees had turned the Harvard-educated Franken into a weapon of choice for Democrats eager to attack the administration and energize party voters.

Now, Franken's rising trajectory has been interrupted by allegations he had physical contact with four women without their permission. He faces a Senate ethics investigation for improper conduct and hasn't been seen publicly since the first claims of misbehavior last week. His future is suddenly unclear.

"It's always a great disappointment when leaders you like and admire do bad stuff," said Mike Lux, a liberal Democratic consultant. He said it was premature to say how the allegations would affect Franken's career. But, Lux added, "If more incidents come to light, he's got a real problem."

Los Angeles radio anchor Leeann Tweeden last week said Franken had put his tongue in her mouth during a 2006 USO tour, before he became senator. She also posted a photo of him with his hands above her chest as she slept wearing a flak vest aboard a military plane. Franken, 66, has apologized.

Another woman, Lindsay Menz, said Monday he'd squeezed her buttocks in 2010 while posing for a photo at the Minnesota State Fair. Franken, by then a senator, said he didn't remember the picture but expressed remorse that Menz felt "disrespected."

In a story published Wednesday by the Huffington Post, two more women alleged that Franken touched their buttocks during campaign events in 2007 and 2008.

Franken canceled a sold-out appearance in Atlanta to promote his book, "Al Franken, Giant of the Senate." His aides have said he's "spending time with his family and doing a lot of reflecting."

That time for reflection apparently yielded a Thanksgiving statement of explanation and regret -- and a pledge to regain the trust of Minnesotans, suggesting that Franken wasn't planning on resigning as some have called on him to do.

In a statement provided to CBS News Thursday evening by his Deputy Chief of Staff Ed Shelleby, rather than the usual communications team, Franken said that as a "warm person" he hugs people and that he's learned from recent stories that "in some of those encounters, I crossed a line for some women -- and I know that any number is too many."

He added: "Some women have found my greetings or embraces for a hug or photo inappropriate, and I respect their feelings about that. I've thought a lot in recent days about how that could happen, and recognize that I need to be much more careful and sensitive in these situations.

"I feel terribly that I've made some women feel badly and for that I am so sorry, and I want to make sure that never happens again. And let me say again to Minnesotans that I'm sorry for putting them through this and I'm committed to regaining their trust."

Franken came to the Senate after a months-long recount gave him a 312-vote victory in his 2008 election. He immediately distanced himself from his decades of professional comedy, which included off-color jokes about rape and disparaging women, and avoided national reporters.

Instead, he focused on building a reputation as a studious senator, pushing legislation to crack down on Wall Street rating agencies he considered complicit in the 2007 economic collapse. As a signature issue, he adopted the push to protect "net neutrality," an Obama administration policy barring internet providers from blocking or hindering websites. The Trump administration's Federal Communications Commission said Tuesday it will dismantle the rule.

Franken appeared on his first Sunday network talk show late in his first term amid signs he was bolstering his national profile. But it was Trump's emergence that teased out a new Franken and had him pivot from staid senator to liberal attack dog.

In withering interrogations in the Senate, Franken has clashed with a parade of Trump Cabinet appointees.

"He made those guys sweat," former Senate Democratic aide Jim Manley said. "He's got the ability to channel some of the populist rage against the administration."

Franken had a celebrated clash last month with Jeff Sessions over the attorney general's evolving descriptions of his contacts with Russian officials during last year's presidential campaign. Sessions, a Trump campaign official, told Congress in January he'd not communicated with the Russians. He later said he didn't recall such contact. Then last month, he told the Senate Judiciary Committee he'd had no "improper discussions" with them.

"To me, that is moving the goal posts every time," Franken, a committee member, told Sessions.

At a January confirmation hearing, Franken bore into education secretary nominee Betsy DeVos when she seemed unable to answer a policy question. "I'm not that surprised that you didn't know this issue," he said.

He opposed Trump Supreme Court pick Neil Gorsuch and battled with Rick Perry over the energy secretary's skepticism that increased carbon dioxide emissions cause global warming. He told Tom Price, who has since resigned as health secretary, that it was "very hard to believe" that he didn't realize he'd owned tobacco stocks, and that "millions of Americans" feared the Trump administration's push to repeal Obama's health care law.

In a lighter exchange, Perry told Franken he enjoyed meeting him at the senator's office, saying, "I hope you are as much fun on that dais as you were on your couch."