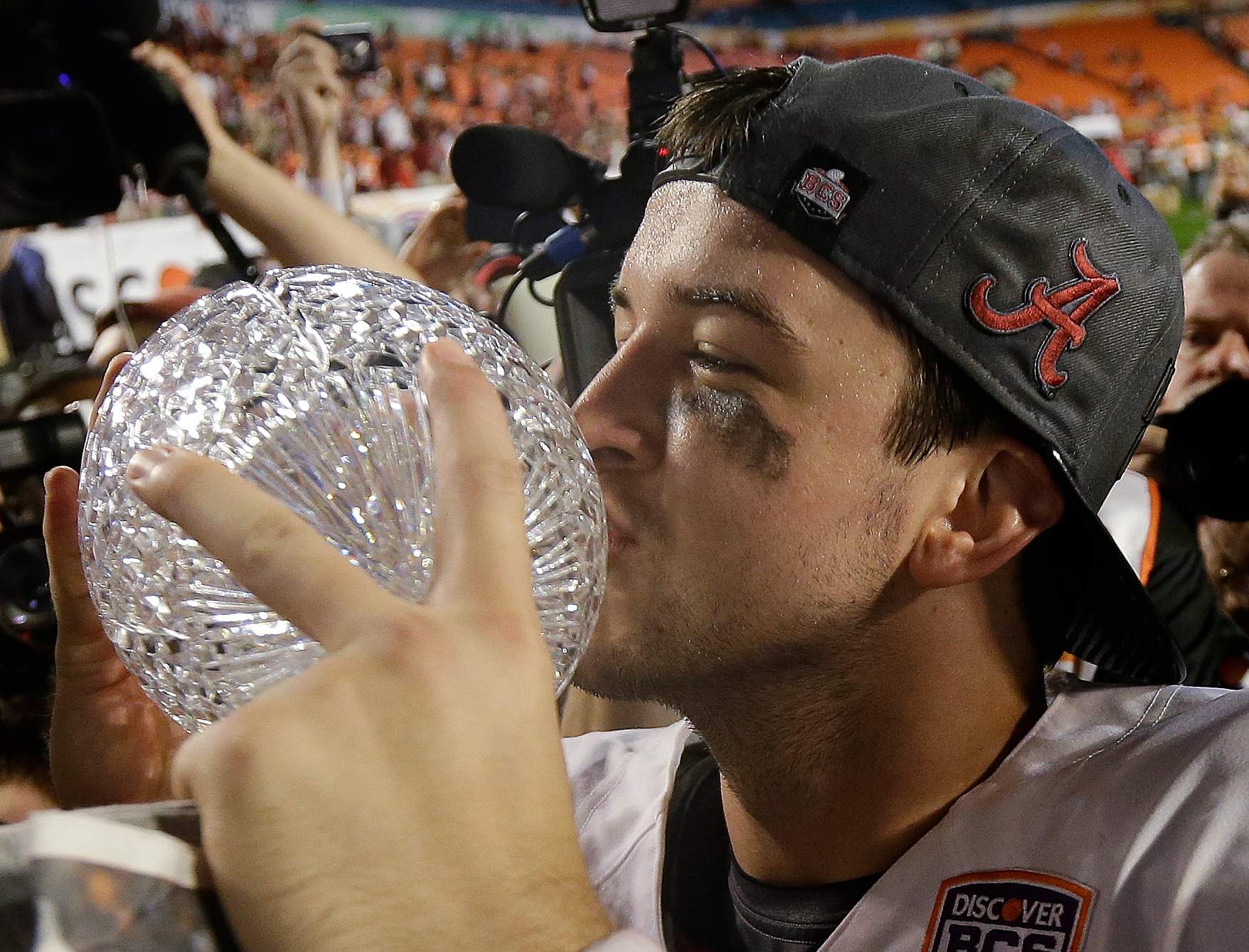 MIAMI GARDENS, Fla. It might have been the hardest hit Alabama quarterback AJ McCarron absorbed all night.

With the play clock down to zero and just a few minutes before the confetti started raining down, McCarron expressed displeasure with All-America center Barrett Jones after an essentially meaningless delay of game penalty. Jones gave him a good shove, and then the Crimson Tide went back to dispatching Notre Dame 42-14 Monday nightto claim the program's second straight national title and third in four years.

Both parties and coach Nick Saban dismissed the incident as no big deal.

"Well, that's just AJ," Saban said. "That's the kind relationship I have with him.'

Feisty, competitive and hardly lacking in confidence, McCarron was once again on target and well-protected in a BCS championship game.

The nation's leader in passing efficiency completed 20 of 28 passes for 264 yards and four touchdowns in a game that might have even been better than his MVP performance against LSU a year ago. He moved past John Parker Wilson to set the school record with 49 career passing touchdowns with a year to go since McCarron has already announced he'll return for his senior season instead of turning pro.

McCarron has had plenty of spats with Jones, the leader of an offensive line that kept his jersey virtually spotless in the finale: No sacks, not even an official quarterback hurry on the stat sheet. That stuff happens with motivated competitors in such close quarters.

Just not usually on national television.

"I shouldn't have pushed him," said Jones, who won the William V. Campbell Trophy as college football's top scholar-athlete. "It's just not a big deal. The play clock was running down. We were delayed. We just wanted to run some clock and we ended up not having much time at the line and they shifted and I ended up having to make some calls, and then the clock ran out. AJ blamed it on the nearest person, which was me."

McCarron had a different take on what happened, but also dismissed the significance. He blamed it on miscommunication — sort of.

"He wanted to do something else, and I was right and he didn't like it," McCarron said, grinning. "That's us, we're both perfectionist. I think you're all are making it a little bit bigger than what it is."

Bruce Feldman, CBSSports.com senior college football columnist, says: "After what McCarron has done in the past two years in BCS title games, he certainly deserves his share of the spotlight. McCarron connected on 43 of his 62 passes and had four TDs and zero interceptions in wins over LSU and Notre Dame, teams ranked No. 1 and No. 2 in defense. Not bad for a guy who many dismissed as merely a 'game manager.'"

Alabama had plenty of big offensive performances in the game. Tailback Eddie Lacy earned outstanding offensive player honors with 140 yards and two touchdowns — one rushing, one receiving — and freshman T.J. Yeldon ran for 108 yards and plowed through the line for a 1-yard score behind noseguard/goal line fullback Jesse Williams.

"It was a great game," Jones said. "I loved our balance. I just think this was probably the best overall offensive performance we've had all year."

McCarron as always was pulling the trigger, and maybe he also lit the fuse in that one heated moment.

Not surprisingly, Saban speaks fondly of that kind of passion and intensity.

"AJ is a leader, he's a competitor, he's a fiery guy," the coach said. "I think he has a tremendous amount of respect for the competitors who play around him.

"But I also think that he lets his personality come out, and I think people respect that."

Webb gained more than 90,000 twitter followers throughout the game, including Arizona Cardinals defensive linemen Darnell Dockett, who tweeted his phone number to her.

According to CBSSports.com's Bruce Feldman, McCarron (88,000 followers) was informed Webb actually had passed him in Twitter followers.

"No way!" he said incredulously.