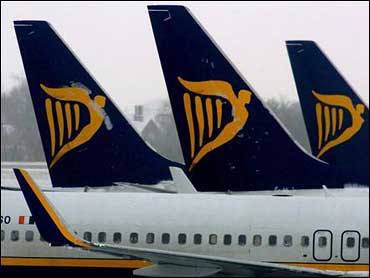 Some airlines are warning the United Kingdom must prioritize aviation in Brexit negotiations if it wants to avoid major air travel disruptions. Budget carrier Ryanair chief marketing officer Kenny Jacobs said flights between the UK and Europe could come to a standstill in two years.

Airlines based in the EU have the right to fly to, from and within any country in the bloc thanks to the single aviation market created in the 1990s, but Britain now has just two years to renegotiate access or come up with an alternative system.

“There is a distinct possibility that there may be no flights between the UK and Europe for a period of time after March 2019,” Jacobs said on Wednesday.

The UK is set to trigger Article 50 on Wednesday and begin the process of leaving the European Union. The move will end a 44-year relationship, and Britain’s breakup with the EU may not be pretty.

The divorce papers were filed at European Union headquarters in Brussels, after British Prime Minister Theresa May signed an official letter to EU Council President Donald Tusk on Tuesday.

In a statement, May said, “It is my fierce determination to get the right deal for every single person in this country.” She added that this included EU nationals living in Britain, who had “made this country their home.”

The airlines’ problems could reflect the tip of the country’s economic struggles. Some economists have predicted the country will enter a recession as a result of Brexit. Meanwhile, tens of thousands of U.K. jobs directly tied to the EU’s nearly $18 trillion unified marketplace could move to the Continent over the next few years. Corporations in the banking, manufacturing and pharmaceutical industries are likely to shift workers out of the UK, given that the bulk of their customers are in the EU.

U.K.-based low cost carriers, especially Luton-based easyJet , are among those most affected by Brexit, because they typically make more use of the EU rights to fly between other member states and not just to and from the UK.

They could lose that right after Brexit. EasyJet said on Wednesday it was close to applying for a license to set up an operating company within the EU to protect its intra-EU flights. Its headquarters and listing would remain in Britain, it added.

Jacobs said there was no time to lose to strike an aviation deal between Britain and the EU, as airlines need to finalize their 2019 summer schedules in the first half of next year.

While British Prime Minister Theresa May has said no Brexit deal - and a return to World Trade Organisation rules - was better than a bad deal, aviation is not covered by WTO, creating greater uncertainty over what might happen.

Since Britain’s June 23 vote to leave the EU, easyJet shares are down 35 percent, Wizz Air’s are down 18 percent, Ryanair’s are up 4 percent and British Airways owner IAG’s are up 0.7 percent. Shares in Germany’s Lufthansa , meanwhile, are up 24 percent.

European airports have also called for a back-up plan, saying a return to decades-old traffic rights deals should be avoided. Traffic rights between Germany and Britain could revert back to a bilateral deal from 1955.

But while some in the industry want to push aviation to the top of the negotiating list, there has been some push back.

German aviation association BDL has said it supports the German government view of not allowing any cherry-picking in Brexit talks and Lufthansa CEO Carsten Spohr said he expected France and Germany would not agree to prioritizing aviation.

“The UK airlines say they want a shortcut. But that’s something Hollande and Merkel won’t do,” he said in Frankfurt earlier this week in comments confirmed by the company.

Another issue for airlines is ownership structure. Ryanair was 53.6 percent owned by EU nationals in mid-2016, including 20 percent ownership by UK nationals, meaning that following Brexit it may fall foul of rules stating that EU carriers must be majority-owned by EU investors.

However, Jacobs told Reuters in a recent interview that he didn’t expect that to be a problem.

“If you look at our investor base, they are big international investors with offices all over Europe and could transfer the shares. So I think that will be solved,” he said.

Ryanair sets out in a document to shareholders on its website the actions it can take to limit share ownership by non-EU nationals.

In the case of easyJet, the 34 percent shareholding owned by founder Stelios Haji-Ioannou and his family could be classed as Cypriot, rather than British, in order to meet the requirement to still be classed as a EU airline.