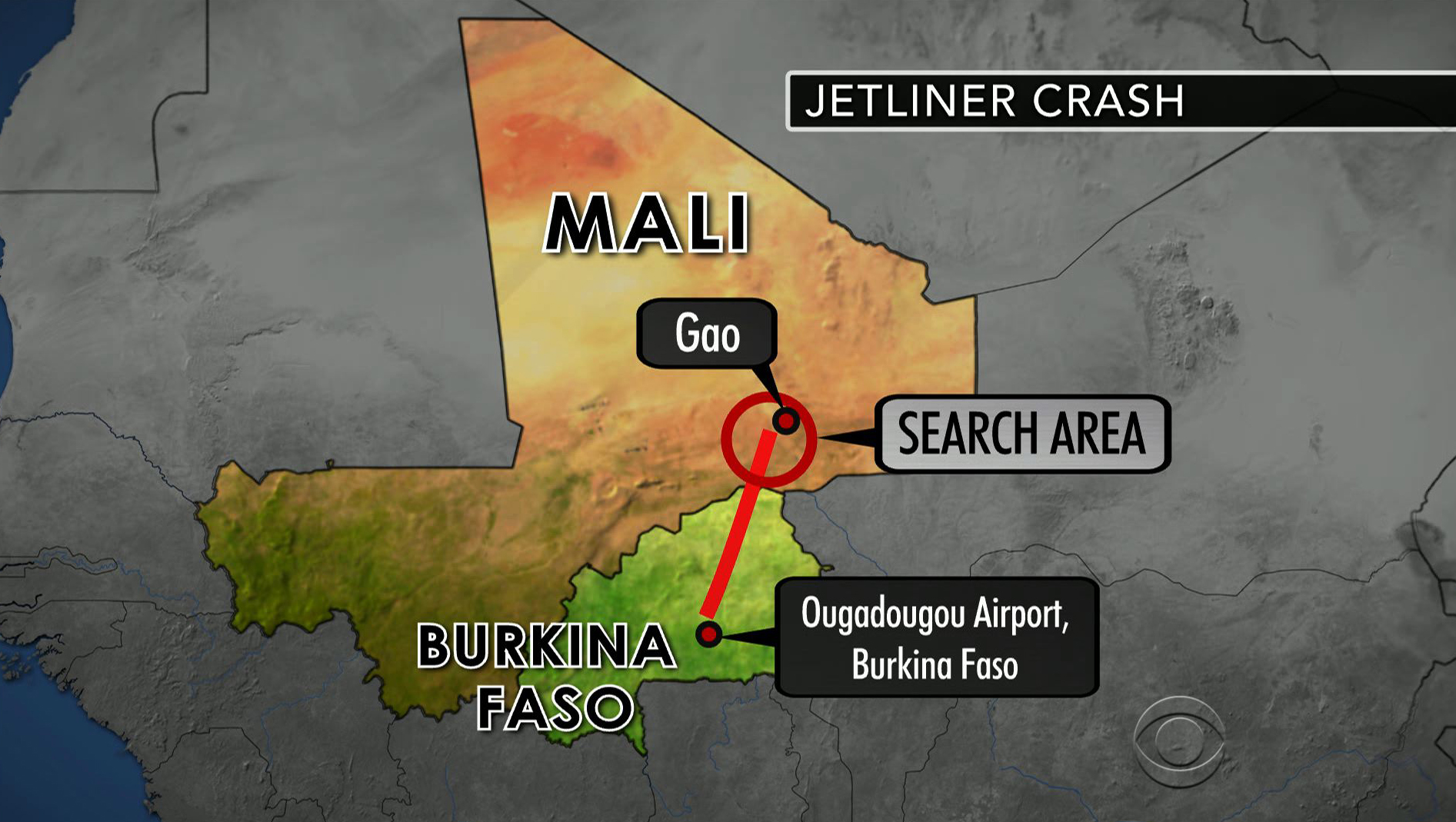 OUAGADOUGOU, Burkina Faso -- The wreckage of an Air Algerie plane with 116 people on board that disappeared from radar during a rainstorm has been found in Mali, a top official from Burkino Faso and Malian state television said Thursday.

The crash of the MD-83 is the third major aviation disaster in a week. Malaysia Airlines Fight 17 was shot down over eastern Ukraine on July 17, killing all 298 people on board. And a plane operated by Taiwan's TransAsia Airways crashed Wednesday while trying to land on an island in the Taiwan Strait, killing 48 people.

Air Algerie Flight 5017 was traveling from Ougadougou, the capital on Burkina Faso, to Algeria's capital, Algiers, when it vanished from radar early Thursday over northern Mali.

Burkina Faso's Gen. Gilbert Diendere said the wreckage was located about 30 miles from the border of Burkina Faso near the village of Boulikessi in Mali.

"We sent men with the agreement of the Mali government to the site and they found the wreckage of the plane with the help of the inhabitants of the area," said Gen. Gilbert Diendere, a close aide to president Blaise Compaore and head of the crisis committee set up to investigate the flight's disappearance.

"They found human remains and the wreckage of the plane totally burned and scattered," he said.

Malian state television also said that the wreckage had been found south of the Malian town of Gao, close to the border with Burkina Faso. It said President Ibrahim Boubacar Keita planned to visit the site Friday.

Earlier, an Algerian official had told CBS News' Debora Patta that the plane had crashed, but he said it remained unclear where it came down or why.

France said early Friday it had sent a military unit to secure the crash site.

"A French military unit has been sent to secure the site and gather the first elements of information," said a statement from French President Francois Hollande's office.

The plane was carrying 110 passengers and six crew members. More than 50 French nationals were on board the plane along with 27 citizens of Burkina Faso and passengers from a dozen other countries. The flight crew was Spanish.

The name Mariela Castro appeared on the passenger list of the flight, which led to reports that the woman was the daughter of Cuban President Raul Castro, but Castro's daughter told reporters in Havana it was a woman traveling on a Spanish passport.

The flight was being operated by Spanish airline Swiftair, the company said in a statement, and the plane belonged to Swiftair.

The passengers include 51 French, 27 Burkina Faso nationals, eight Lebanese, six Algerians, five Canadians, four Germans, two Luxemburg nationals, one Swiss, one Belgium, one Egyptian, one Ukrainian, one Nigerian, one Cameroonian and one Malian, Ouedraogo said. The six crew members were Spanish, according to the Spanish pilots' union.

The crash of the Air Algerie plane comes after a spate of aviation disasters. Fliers around the globe have been on edge ever since Malaysia Airlines Flight 370 disappeared in March on its way to Beijing. Searchers have yet to find a single piece of wreckage from the jet with 239 people on board.

Last week, a Malaysia Airlines flight was shot down by a surface-to-air missile while flying over a war-torn section of Ukraine. The back-to-back disasters involving Boeing 777s flown by the same airline were too much of a coincidence for many fliers.

Then this week, U.S. and European airlines started canceling flights to Tel Aviv after a rocket landed near the city's airport. Finally, on Wednesday, a Taiwanese plane crashed during a storm, killing 48 people.

It's easy to see why fliers are jittery, but air travel is relatively safe.

There have been two deaths for every 100 million passengers on commercial flights in the last decade, excluding acts of terrorism. Travelers are much more likely to die driving to the airport than stepping on a plane. There are more than 30,000 motor-vehicle deaths in the U.S. each year, a mortality rate eight times greater than that in planes.

Unrest continues in northern Mali, which fell under control of ethnic Tuareg separatists and then al Qaeda-linked Islamic extremists following a military coup in 2012. A French-led intervention last year scattered the extremists, but the Tuaregs have pushed back against the authority of the Bamako-based government.

While northern Mali is still considered to be a hub of the illegal arms trade, Patta reported that diplomats have told her insurgents in the region are not believed to have weapons capable of shooting down a commercial airliner flying at cruising altitude. She noted, however, that the Federal Aviation Administration has issued a warning for U.S. carriers not to fly over Mali.

Swiftair took ownership of the plane on Oct. 24, 2012, after it spent nearly 10 months unused in storage, according to Flightglobal's Ascend Online Fleets, which sells and tracks information about aircraft. It has more than 37,800 hours of flight time and has made more than 32,100 takeoffs and landings. The plane has had several owners over the years, including Avianca and Austral Lineas Aereas.

This crash was the fifth - and the second with fatalities - for Swiftair since its founding in 1986, according to the Flight Safety Foundation. The only other fatal crash for the airline came on July 28, 1998, when the two pilots died on a cargo flight to Barcelona.

The MD-83 is part of a series of jets built since the early 1980s by McDonnell Douglas, a U.S. plane maker now owned by Boeing Co. The MD-80s are single-aisle planes that were a workhorse of the airline industry for short and medium-range flights for nearly two decades. As jet fuel prices spiked in recent years, airlines have rapidly being replacing the jets with newer, fuel-efficient models such as Boeing 737s and Airbus A320s.

There are 496 other MD-80s being flown by airlines around the world, according to Ascend.