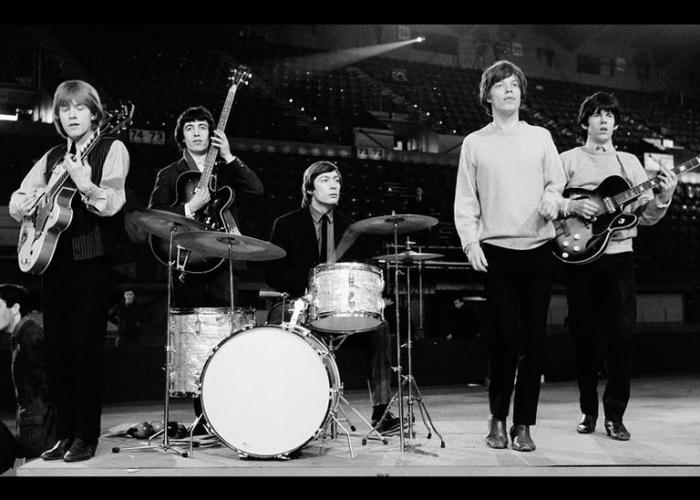 The Beatles and the Rolling Stones represent two sides of one of the Twentieth Century's greatest aesthetic debates.  In this excerpt from his book "Beatles vs. Stones," John McMillian describes how the Stones shaped their image in response to what the Beatles had done.

In order to share in the type of the success the Beatles were having, (Rolling Stones manager Andrew) Oldham insisted that the Stones make some image and personnel adjustments.  On the theory that six members was at least one too many for a successful group, Oldham made them kick out pianist Ian Stewart - who anyhow had too square a jaw for Andrew's liking.  Keith Richards was bizarrely instructed to drop the "s" from his last name; Keith Richard, Andrew said, "looked more pop."  Meanwhile, he added a "g" to the band's name, making them the Rolling Stones; otherwise, he said, no one would take them seriously.  Twenty-six-year-old Bill Wyman was told to begin pretending he was twenty-one.  But most significantly, Oldham persuaded the band to loosen up its performance.  Though Jones still postured himself as the group's leader, Andrew recognized Jagger's electric appeal, and insisted that he share in the limelight.

The idea to style the Stones as the anti-Beatles, though -- to toughen up their image, and encourage them to act as surly and defiant as the dared - came a bit later, and in fact that was the opposite of what Oldham originally had in mind.  Instead, one of his first moves was to buy them a set of matching outfits.  Wyman remembers a day when Oldham "marched us up to Carnaby Street to put us in suits, tabbed-down shirts and knitted ties."  On other occasions the band could be seen in tight black jeans, black turtlenecks, and Beatle boots.  When the Stones debuted on national television, on Thank Your Lucky Stars, they were conscripted into hound's-tooth jackets, high-buttoned shirts and slim ties, looking every bit as dainty and amiable as the pop bands they despised.  Bill Wyman: "It's obvious to me now that ... Andrew was attempting to make us look like the Beatles.  From his association with them he was well aware of the power of marketing, and he was initially slotting us as their natural successors rather than as counterparts."

The following month, though, when the Stones embarked on their first national tour (sharing a spectacular bill with Bo Diddley, Little Richard and the Everly Brothers), they began wearing their outfits in a more slovenly style.  One night, Charlie Watts unexpectedly doffed his waistcoat in a Fenland dressing room; eventually Keith Richards' jacket grew so bespotted with chocolate pudding and whiskey stains that it was no longer wearable.  Onstage, the whole group started moving more, and Jagger took to chewing gum as he sang.  Offstage, a journalist observed, they appeared in "a jumbled assortment of jeans, silk cardigans, camel jackets and sloppy sweaters.  None of the slick suits sported by Bill J. Kramer Gerry and the Pacemakers." When the Stones appeared on a BBC program in October 1963, they frustrated their interviewer by greeting many of his questions with simple "yeah's" and "no's."  But rather than hurting their popularity, all of this seemed to boost their appeal!  Their audiences were becoming more demonstrative, more raucous, to the point where the Stones, just as soon as they finished their sets, were forced to flee their venues through the back door and speed off as quickly as possible to avoid getting mobbed.  Without ever devising or articulating a formula for instigating a cultural revolt, the Rolling Stones began to stumble upon one.

Put another way, though widely held, the idea that Andrew Oldham conjured up a belligerent attitude for the Stones, ab ovo, is a myth.  First, he tried to smarten them up.  But Oldham was quick - very quick - to see the potential in this new approach.  By the time the Beatles conquered America on the Ed Sullivan Show, on Feb. 9, 1964, Oldham was actively promoting the Stones as "the band your parents loved to hate."  "The Beatles were accepted and acceptable," he added, "they were the benchmark and had set the level of competition."  By contrast, "The Stones came to be portrayed as dangerous, dirty and degenerate, and I encouraged my charges to be as nasty as they wished to be."

He "made sure we were as vile as possible," Mick acknowledged.  "Andrew pitched it so we were very much the antithesis of the Beatles."  Of course, the Stones proved masterful at projecting arrogant, sour attitudes.  Surely Jagger was deploying his best Cockney-put on when he told an interviewer, circa 1964: "If people don't like us, well that's too bad.  We're not thinking of changing, thanks very much. We've been the way were are for much too long to think of kowtowing to fanciful folk who think we should start tarting ourselves up with mohair suits and short haircuts."

But Jagger was lying.  It had only been a short while earlier that the Stones, eager for exposure, appeared on Thank Your Lucky Stars with acceptable hair and matching suits.  If the Beatles "sold-out" by changing their image in order to improve their chances of becoming successful, so too did the Stones - only they went through two early transformations.  First, they costumed themselves in matching suits and ties, just like any Liverpool pop group; then, within a few months, they began experimenting with a different approach of their own design - dressing sloppily, accentuating their sexuality, and behaving obnoxiously.  This was an image that suited them perfectly.  Though not quite "gentlemen" in the first place, they became rather convincing as thugs.
John McMillian, an assistant history professor at Georgia State University, studies Twentieth Century social movements. He is especially interested in New Left and youth culture radicalism during the 1960s. Author of "Smoking Typewriters: The Sixties Underground Press" and "The Rise of Alternative Media in America," he is also founding co-editor of The Sixties: A Journal of History, Politics and Culture. John has co-edited several scholarly anthologies, and contributed short essays and book reviews to the Washington Post, The Nation, The Chronicle of Higher Education, the New York Observer, the Boston Globe and elsewhere.
View CBS News In
CBS News App Open
Chrome Safari Continue
Be the first to know
Get browser notifications for breaking news, live events, and exclusive reporting.