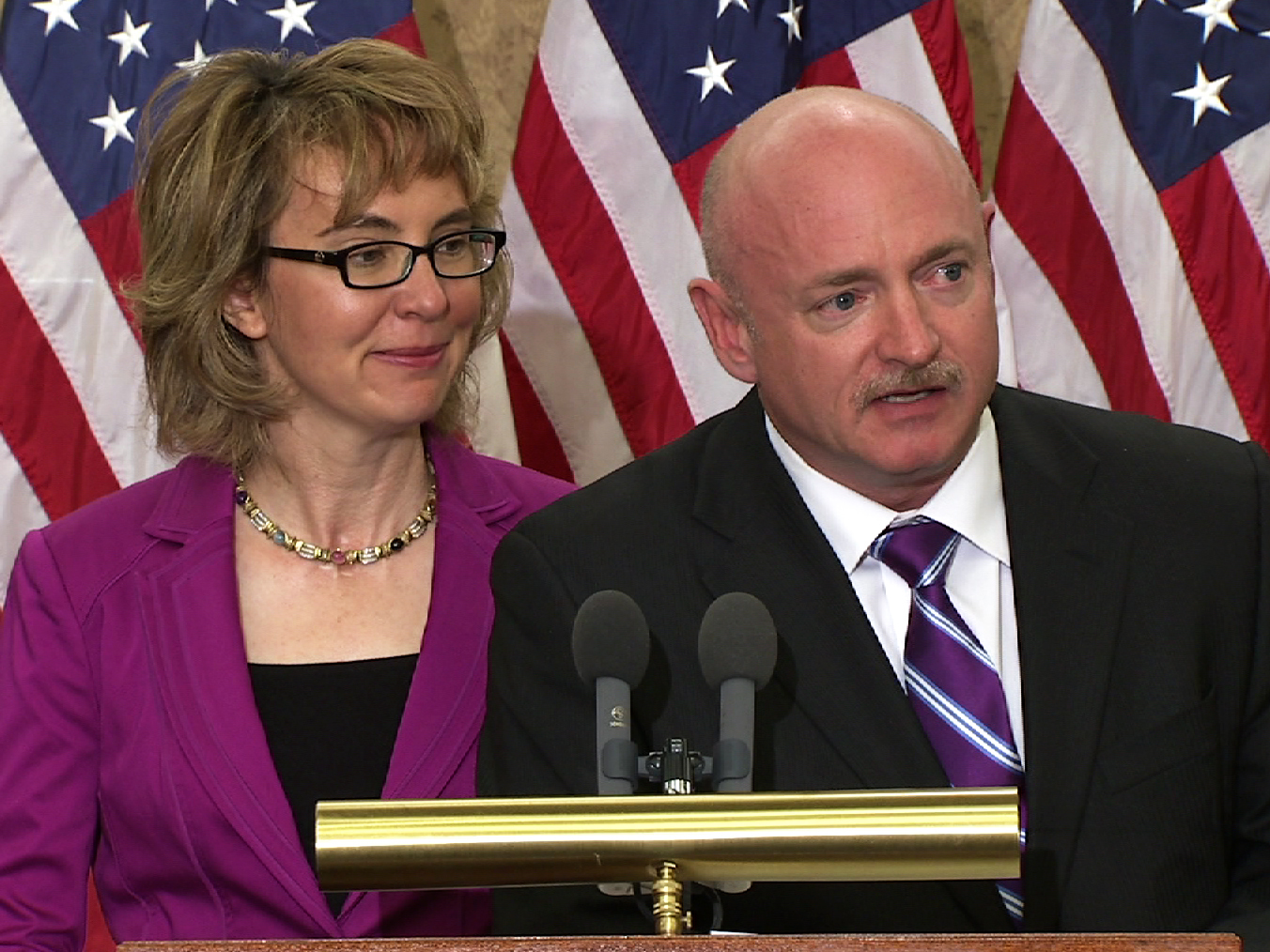 As Democrats reel from last week's defeat of a critical Senate amendment strengthening background check laws for gun buyers, Americans for Responsible Solutions, the gun safety group founded by Gabrielle Giffords and her husband Mark Kelly, is out with new ads targeting two Republican senators who voted against the measure.

"We watched. We listened. We felt it. Newtown," an announcer says in the ad targeting McConnell. "But Senator McConnell won't listen to us. Eighty-two percent of Kentuckians support universal background checks. But Senator McConnell voted against them. McConnell opposed common sense checks to keep guns out of the hands of criminals. Written by a Republican and a Democrat. Supported by law enforcement officers. It was a common sense plan that protected Second Amendment Rights. But Senator McConnell ignored the will of the people. Making our children and our families less safe.... And putting the Washington special interests ahead of Kentucky... AGAIN."

The spot targeting Ayotte features two women discussing an ad Ayotte had previously run "saying she's one of us," before assessing that "it sure didn't take long for her to 'go Washington.'"

"Says here Ayotte voted against improving background checks to keep guns out of the hands of criminals," one woman says.

The other responds indignantly: "Are you serious? 89 percent of the people in New Hampshire support universal background checks. She just ignored us?"

According to Americans for Responsible Solutions, the New Hampshire ads will air on the radio in Concord, Manchester, Keene, and the Seacoast; in Kentucky, the ads will run on radio stations in Louisville and Lexington, targeting women voters, over the course of the two week buy.

In the aftermath of last week's vote, Giffords described her reaction to the Senate vote in an op-ed for the New York Times: "I'm furious," she wrote. "Mark my words: if we cannot make our communities safer with the Congress we have now, we will use every means available to make sure we have a different Congress, one that puts communities' interests ahead of the gun lobby's."

The ads targeting McConnell and Ayotte seem to signal the next strategic step for Giffords' group, which aims, in part, to counterbalance the power of the National Rifle Association by matching it in both fundraising and grassroots activism. The power of Americans for Responsible Solutions, along with other pro-gun safety groups like New York City Mayor Mike Bloomberg's Mayors Against Illegal Guns, to be effective in that goal will likely be tested in 2014, when it has the chance to make its power felt in state and local elections across the country.

"As Gabby said last week, if we can't keep our communities safer with the congress we have, we will work to change congress, " said Pia Carusone, Executive Director of ARS, in a statement. "Senator McConnell and Senator Ayotte turned their backs on their constituents at home in order to do the bidding in Washington of the corporate gun lobby. We're going to make sure their constituents know that, effective immediately."

Going up against the pro-gun lobby is a formidable task: According to public lobbying disclosure records, the NRA spent $700,000 lobbying the federal government in the first quarter of 2013, up from $575,000 during the same period last year. The NRA also got a boost of about $100,000 this year from contract lobbying firms, according to the watchdog group Public Integrity.. Public Integrity also notes that the NRA and affiliates spent nearly $3 million in 2012 on federal lobbying, more than during any previous year.

According to the Hill, Mayors Against Illegal Guns spent $250,000 on lobbying efforts, though neither that group nor Giffords' has filed a quarterly lobbying report.