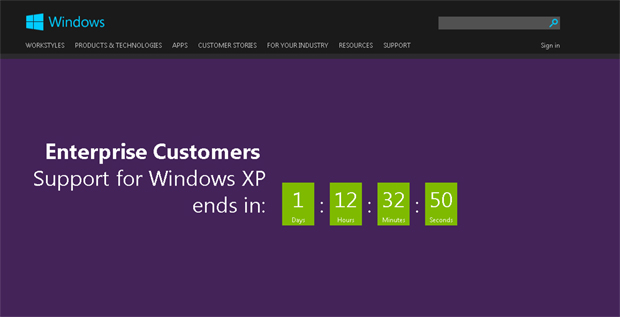 PC users have heard this repeated again and again over the past few months, but this is a final goodbye -- Windows XP will be officially dead on Tuesday.

Dead is perhaps a bit extreme, as computers that run XP will still work. However, Microsoft will no longer support the 12-year-old operating system, which mean no more updates and no more security patches for the already vulnerable OS.

This means that the 30 percent of computers worldwide that run XP will be unsecured going forward -- security holes will not be patched through automatic updates and "every day after that, your computer gets a little bit less secure, but bear in mind it's probably a very old computer to begin with," CNET senior editor Dan Ackerman told "CBS This Morning."

In a blog post last month, antivirus software maker Avast warned XP users of the dangers that are likely to face if they continued to use the outdated operating system. Already six times more likely to get attacked than Windows 7, Internet Explorer on XP poses an even larger threat, Avast suggested that users switch over to Google Chrome.

"The latest version of the browser available on Windows XP is version 8, making it outdated and lacking a number of security improvements available in its later versions," the software maker writes. "Of our existing Windows XP user database, 21.5 percent run Internet Explorer, leaving themselves open to easy attacks."

Not only are consumers at risk, but business and government users are extremely at risk. Avast warned that the next Target-like attack might be brewing, because 95 percent of ATMs use XP and medical offices that keep confidential patient information using XP could easily be breached. ZDNET reported that both the Dutch and British governments paid millions to extend Microsoft XP support.

In an attempt to convince XP users to switch over to Windows 8.1, Microsoft has offered numerous deals -- the latest now includes $100 off select computers, 90 days of tech support and free data transfer -- when a user orders a new PC from a XP computer or brings it into a Microsoft store.

According to NetMarketShare, other versions of Microsoft's operating system are widely used. Windows 7 runs on 47 percent of computing devices, while its predecessor, Windows Vista and successors Windows 8 and 8.1, runs on a combined total of roughly 13 percent. Mac OS X runs on only 3 percent of computers.
View CBS News In
CBS News App Open
Chrome Safari Continue
Be the first to know
Get browser notifications for breaking news, live events, and exclusive reporting.