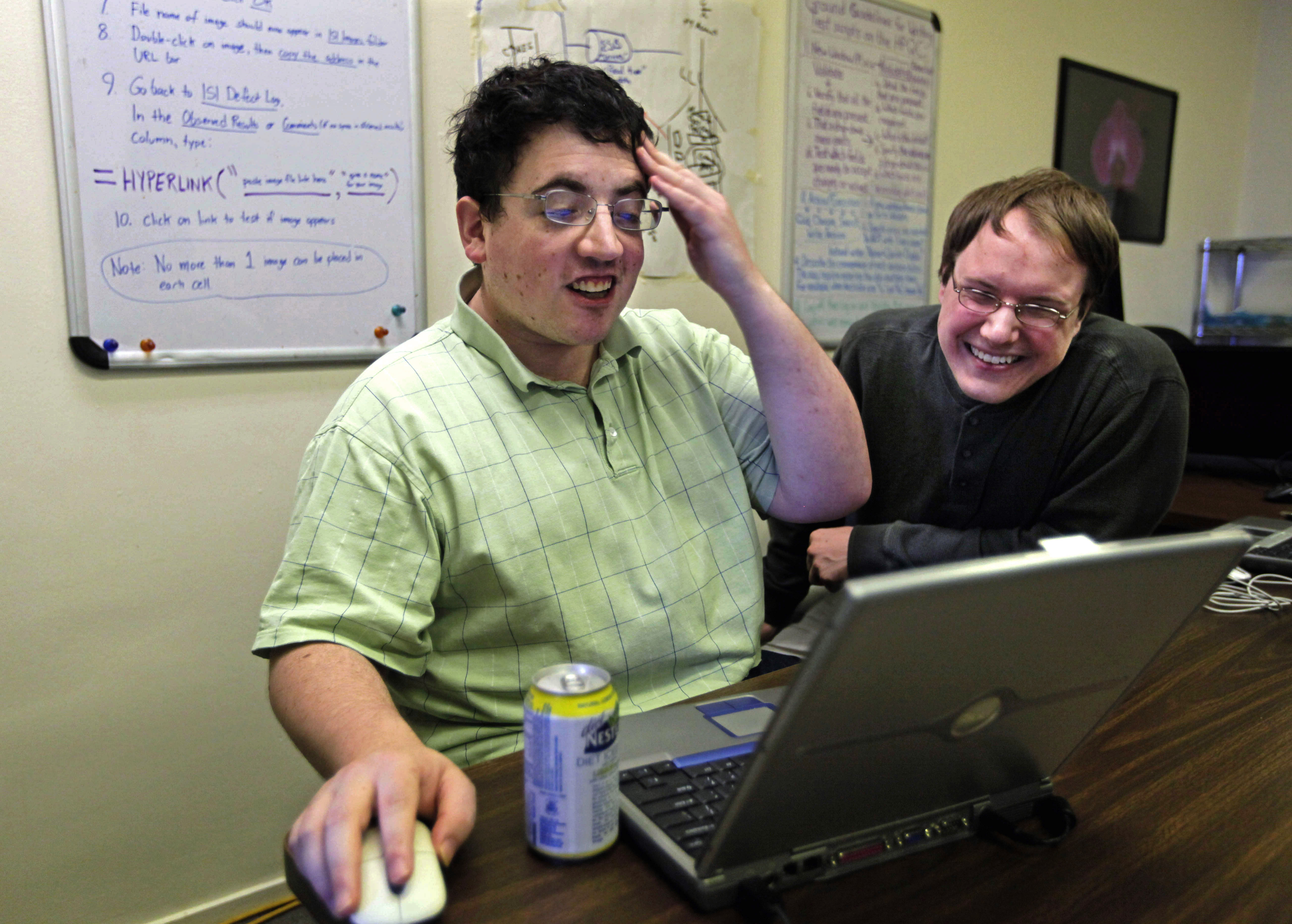 HIGHLAND PARK, Illinois - The software testers at Aspiritech are a collection of characters. Katie Levin talks nonstop. Brian Tozzo hates driving. Jamie Specht is bothered by bright lights, vacuum cleaners and the feel of carpeting against her skin. Rider Hallenstein draws cartoons of himself as a DeLorean sports car. Rick Alexander finds it unnerving to sit near other people.

This is the unusual workforce of a U.S. startup that specializes in finding software bugs by harnessing the talents of young adults with autism.

Traits that make great software testers - intense focus, comfort with repetition, memory for detail - also happen to be characteristics of autism. People with Asperger's syndrome, a mild form of autism, have normal to high intelligence and often are highly skilled with computers.

Video: How early can a child be diagnosed with autism?

Aspiritech, a nonprofit in Highland Park, Illinois, nurtures these skills while forgiving the quirks that can make adults with autism unemployable: social awkwardness, poor eye contact, being easily overwhelmed. The company's name plays on the words "Asperger's," "spirit" and "technology."

"They exceeded my expectations," said Dan Tedesco of Shelton, Connecticut-based HandHold Adaptive, which took a chance on Aspiritech to test an iPhone application. "There is a pride in their product you don't usually see in this type of work."

Aspiritech was founded by Moshe and Brenda Weitzberg after their son, Oran, now 32, was fired from a job bagging groceries. Oran was diagnosed with Asperger's syndrome when he was 14. He now works at Aspiritech.

"He went from failing at bagging groceries to being one of the best software testers on our team," said Brenda Weitzberg.

The Weitzbergs modeled Aspiritech on a successful Danish company called Specialisterne, or "the Specialists." Specialisterne also employs software testers with autism. Its satisfied clients include Oracle and Microsoft.

Other companies in Belgium, Japan and Israel are either hiring or training adults with autism as software testers.

This year, Aspiritech projects $120,000 in revenue, with 60 percent coming from donations and 40 percent from clients. The Weitzbergs hope to raise the client revenue to 50 percent next year.

"There have been a couple of attempts in the U.S. and Aspiritech is the one that's making it," said Scott Standifer of the University of Missouri's Disability Policy and Studies office and the organizer of a national conference on adults with autism and employment.

The exact unemployment rate for adults with autism is unknown, but it's thought to be high, Standifer said.

"We don't know how many adults have autism and, because of that, we don't know their rate of unemployment," he said. "We do know from tracking adults just emerging from high school that they are having great difficulty finding jobs."

A 2009 U.S. Department of Education survey found the employment rate for young adults with autism was on par with that for deaf-and-blind young adults, and well below the rate of those with blindness alone or learning disabilities or traumatic brain injuries, Standifer said.

Since Asperger's syndrome didn't become a standard diagnosis until the early 1990s, many of Aspiritech's software testers were adults when they first learned they were on the autism spectrum. They are pioneers, the first generation of adults with Asperger's.

Katie Levin, 35, was diagnosed in her late 20s with Asperger's. As a child, she'd been labeled as mentally ill.

"Asperger's is not a mental illness," she said. "I definitely feel like I identify with the Asperger's community more than I did with the mental illness community." She tests software and runs Aspiritech's Facebook page and Twitter feed.

Rick Alexander, 24, another tester, has a degree in computer science from the Illinois Institute of Technology and completed an internship developing software for the city of Chicago.

"I have a lot of social anxiety. I don't like meeting new people," said Alexander, who was diagnosed with Asperger's syndrome as a teenager. Like many of the other testers, he lives with his parents.

He'd rather be a software developer than a tester, he said. But selling himself in a job interview is "very difficult for me."

Most research dollars have gone toward studying children with autism while adults have been neglected, said Molly Losh, an autism researcher at Northwestern University.

"Our vocational structure really isn't suited to funnel people with autism into the workforce," Losh said. Aspiritech "is a magnificent and innovative venture," she said.

Many businesses hire offshore companies to test software. Mike Mestemaker, director of engineering for Schaumburg, Illinois-based ISI Telemanagement Solutions, chose Aspiritech because it offered competitive rates but was based in the United States.

"They dove right in and worked very quickly," Mestemaker said. "They were very detail-oriented people. They really got the job done."

ISI was happy with the work and has hired Aspiritech for a second project, he said.

Aspiritech provides meaningful work (pay is $12 to $15 an hour) in a relaxed environment where bosses never yell if you're late and nobody minds if you need to be alone for a while. What's more, the company is building social skills. The software testers, who are in their 20s and 30s, are trained to work together and they take part in organized outings: miniature golf, bowling, eating at a restaurant.