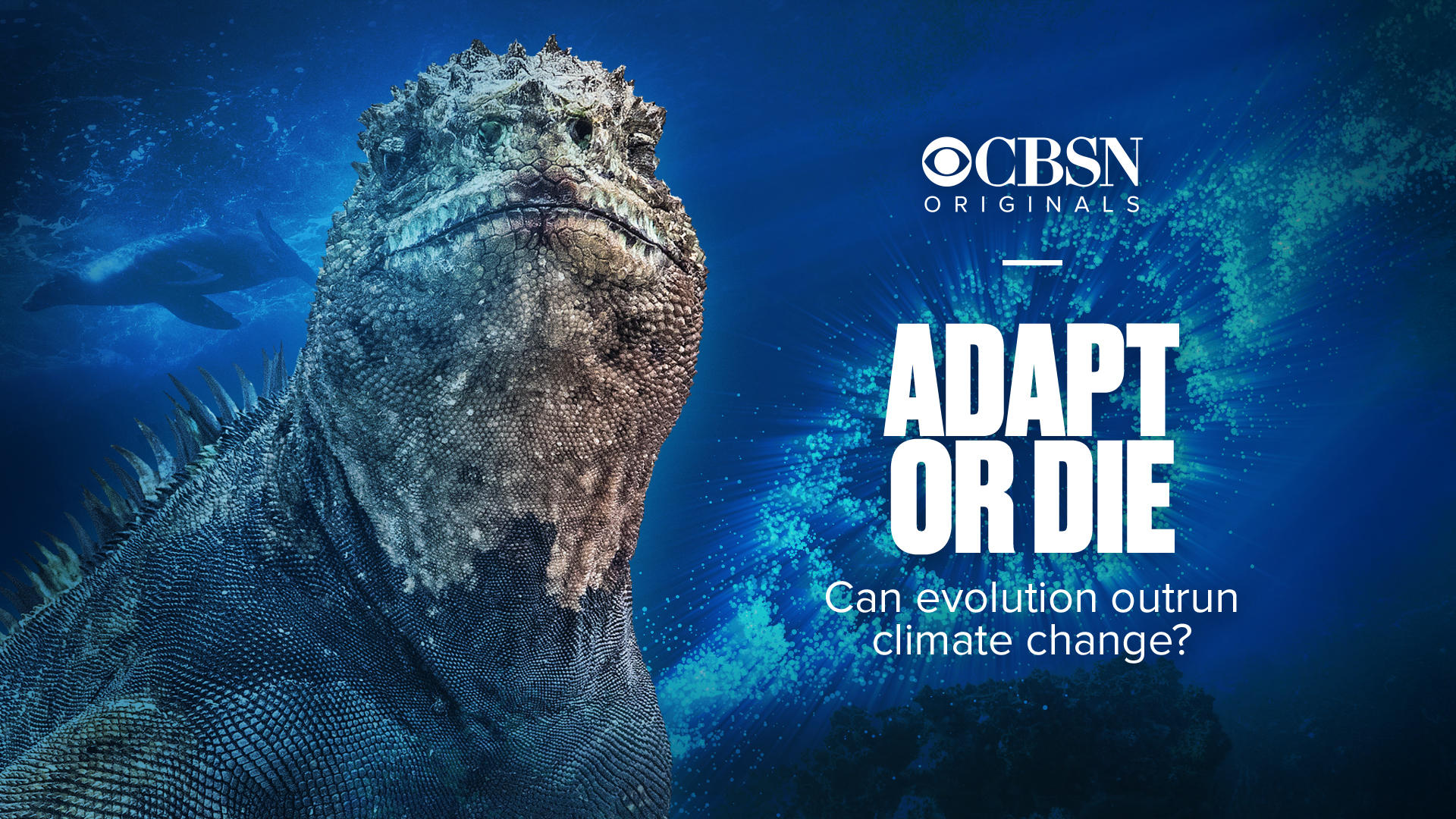 Across the planet, animal and plant species are on the run. A rapidly changing climate is shifting when and where plants blossom, and forcing creatures big and small to migrate and learn new tactics for survival.

It's a trend that's likely to accelerate as scientists expect to see more extreme weather events -- intensifying storms and droughts, and greater temperature fluctuations on land and sea. To understand the impact, researchers are flocking to a unique, living lab: the Galápagos Islands.

The Galápagos, a remote, rocky archipelago 500 miles off the coast of Ecuador in the Pacific Ocean, are home to animals that don't exist anywhere else in the world -- animals so unique that they inspired Charles Darwin to formulate the theory of evolution after his famous voyage aboard the H.M.S. Beagle in the 1830s.

Species like giant tortoises, marine iguanas, flightless cormorants and finches with finely-tuned beaks evolved in isolation here over millions of years -- since long before humans walked the Earth. But today, those that fail to adapt to their changing environment within the space of a few brief generations may face the prospect of extinction.

CBSN Originals traveled to the Galápagos to see firsthand how the effects of both climate change and adaptation are playing out right now.

Marine biologist Jon Witman from Brown University comes to the Galápagos regularly to monitor the effects of climate change on the evolutionary process.

He said evolutionary changes that once unfolded over hundreds of thousands of years are now happening before our eyes.

"It's a major new perspective in evolutionary biology and ecology, because it's forcing ecologists like me to think about adaptation and natural selection on the period of ten years or so," he said.

Witman's team is focused on understanding the impact underwater, diving to inspect the health of coral reefs and see how changes in water temperature may be shaping changes in marine species.

Part of what they're looking for is the impact of repeated El Niño systems, which he calls "the greatest modulator of climate on the planet." El Niño is a complex weather phenomenon that results in a warming of Pacific Ocean waters, which can devastate marine populations. Its counterpart, La Niña, cools the water and helps foster growth and recovery in the ecosystem.

These warming and cooling cycles test the resilience of species to withstand opposite extremes.

Coral will bleach and eventually die if the water becomes too warm or too cold. And since 90 percent of marine species -- from algae all the way up the food chain -- rely on the habitat of coral reefs, the consequences are far-reaching.

Witman is concerned about evidence that climate change may make the naturally-occurring El Niño and La Niña cycles more frequent and more extreme -- pushing nature's resilience to a breaking point. Will animals be able to cope?

"That's the $64 million question that we want to answer," he said. "Yes and no. I think the no part is that the El Niño stress may recur so frequently that the species that are stressed don't have enough time to recover before the next El Niño comes.

"There's no doubt we are in an unprecedented period of global stress in terms of climate impacts. And basically  the natural world is being hit by what I call the big three. Certainly climate change is up there. Habitat destruction by humans is absolutely key. And we're also adding pollution to the ecosystem. It sounds pretty grim, and it is grim."

There are fewer than 1,000 Galápagos penguins on the islands, and Gustavo Jimenez is on a mission to capture every last one of them. The researcher and his team work day and night to chase down and scoop up the birds so that they can be measured and studied, then released back into the wild.

"We're worried what happening in the planet. The planet is just -- is one, just one house for everybody, for every species. So we know we need to protect them," Jimenez said.

He's tracking the health of the penguins and whether they're having babies. The data he gathers on this endangered species will be critical to understanding how the changing climate may affect their feeding and breeding patterns -- and may help find clues to evolutionary changes the species is undergoing.

Their survival is not assured. The planet is currently experiencing one of the greatest extinction events since the dinosaurs disappeared 65 million years ago. While extinction is a natural phenomenon, with one to five species historically being lost each year, these days it's occurring at 1,000 to 10,000 times the natural rate. Dozens of species worldwide are being lost forever every single day.

It's a threat potentially facing the flightless cormorant, a bird Yamaguchi calls an "oddity of evolution." Somewhere around two million years ago, its evolutionary path diverged from other cormorants and it lost the ability to fly. The Galápagos cormorants didn't need to fly; they could find all the food they needed in the waters off the islands' jagged rocks, so they developed powerful legs and webbed feet to help them become strong swimmers instead.

Penguins share those rocks, nesting in pairs in the cave-like crevices. Jimenez said climate change is having a noticeable impact on them, forcing penguins to move their nests to higher ground. The researchers keep a record of each location.

The penguins' ability to adapt -- which helped this species thrive near the equator while most penguins chill in Antarctica -- offers their best hope for the future. But this time around, they may not have millions of years to figure it out.

"Maybe the time is smaller than before, and the problem is how they could adapt … in that short time," Jimenez said.

Researcher Jaime Chaves is a self-described "bird geek" who's taken an interest in studying Darwin's finches -- the very species that helped inspire Charles Darwin's landmark book, "The Origin of Species," in 1859.

Darwin documented how the beaks of these small birds varied from island to island to take advantage of available food sources. Those with sharp beaks feasted on insects while others with short, stout beaks plucked seeds from the ground. Natural selection meant those best suited to their environments thrived and multiplied, while others struggled and died out. Eventually they developed into 14 distinct species.

Chaves and his team string up very fine netting between the trees to capture finches for study.

"We're gonna analyze and collect the data on their morphology, that is, how different their beaks are," he explained. "The beak shape is one of those traits in birds that is so key because it will determine the fate of that group."

Chaves and his students track minute changes, year to year, in the shapes and sizes of the finches' beaks as the flocks adapt to the varieties of food available. Those with inadequate beaks don't survive. And because the finches breed two or three generations every year, "in so little time, you can see evolution in action," he said.

These rapid adaptations may give it an advantage for survival in a changing world. In 2017, researchers discovered that an entirely new species had been formed when a wayward bird mated with another finch species and produced offspring. Chaves expects to see more of that happening globally as various species migrate.

But it won't always work. "Many species will not be able to make it," he said, echoing the concerns Jimenez expressed for the penguins and Witman for the coral ecosystem. "For many species in which you have this limitation of time, you might be too late."

It may be the ultimate test of the survival of the fittest, and many species -- even our own -- could lose out.

"I think the issue right now that we have is that the changes are happening in such a short period of time. The same amount of change that you've seen happening in a couple of millions of years has happened in the last 40 years," Chaves said. "From our perspective of humans, we have understand that it's our responsibility that these changes are happening because [of] our own mishandling of the planet."

It's no longer enough for animals to evolve. They have to adapt now, adapt fast -- or die.

Burmese python invasion in Florida a hidden legacy of Hurricane Andrew
Thanks for reading CBS NEWS.
Create your free account or log in
for more features.
View CBS News In
CBS News App Open
Chrome Safari Continue
Be the first to know
Get browser notifications for breaking news, live events, and exclusive reporting.