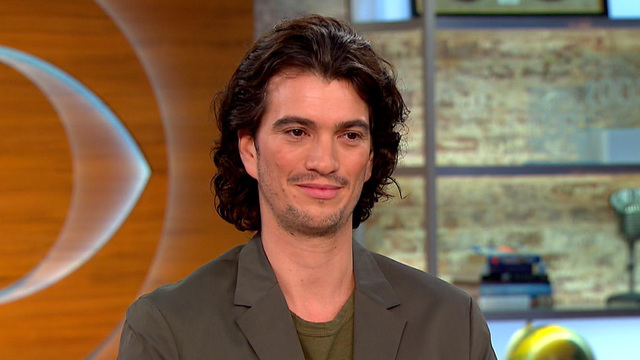 WeWork offers customized, shared office spaces for entrepreneurs. Now valued at more than $16 billion, its offices are home to 10,000 companies.

The WeWork offices are geared toward what CEO and co-founder Adam Neumann calls the "we generation."

"Anybody that wants to be something greater than themselves, that understands that bringing meaning and intention into work and bringing those two things together is a member of the 'we generation' and the money tends to follow," Neumann told "CBS This Morning" Wednesday. "You know I think all of us naturally want to be a part of a community... at home and at work."

But when Neumann first pitched the idea for a competition in his entrepreneurship class in college, he did not make it very far.

"All my peers made it to stage two of five stages. I never made it up. I went to the dean of the college and said, 'I do not want to contest, but why did I not make it up?' And the dean said, 'Adam, no young entrepreneur could ever raise enough money to change the way people live.'"

Neumann put his idea aside and started a series of three, ultimately unsuccessful, businesses, including a shipping company and a baby clothes company. Then he met his future wife, Rebekah Paltrow.

"She said, 'Adam, you're selling baby clothes. It's not your passion ... What are you doing?'" he recalled. "She said, 'Find your passion, do something that actually changes the world. Bring those two together, I promise you - you'll have the best business you ever imagined."

WeWork finally launched in 2010, and now has nearly 100 locations in 26 cities across the globe, with more to come. Real estate giants like Steven Ross and Bill Rudin-- now friends of Neumann - also didn't buy in to the concept initially.

"But very quickly, they understood that this is not a trend," Neumann said. "This is the future of work and if you're a real estate landlord and you have a portfolio, it's important to diversity yourself into this new of working, into this sharing economy and into the 'we generation.'"

Now, WeWork has also taken its concept from the office to the living room, with WeLive. His wife, Rebekah Paltrow Neumann, is his founding partner. The first location just opened in New York's financial district.

Rachel Gutierrez was looking for a change when she found her new WeLive apartment. But the young entrepreneur wasn't drawn as much to the space and amenities as she was to the attitude felt on every floor of the building.

"You can't really measure all of the other things that come with it - the community, the people that you meet, the events," Gutierrez said. "Those things, you can't put a number to."

"It's a new way of living centered on community and the belief that we're basically as good as the people we surround ourselves with," Paltrow Neumann said.

WeLive's apartments are fully furnished and offer plenty of privacy. But it's what's outside your door that makes WeLive different.

"This concept that you're catapulted into the so-called 'real world' and it needs to on some level feel sad or isolating, we don't really subscribe to," Paltrow Neumann said.

A bar, group workout room and a larger kitchen for family meals are scattered throughout the building. Miguel McKelvey designed these spaces to encourage social interactions.

Reflecting on the success he's experienced, Neumann thought back to those college teachers that didn't see the potential in his vision.

"You never know who you're talking to," Neumann said. "Don't limit a young student's dream because that's how we change the world."

How whirling is used to connect with God