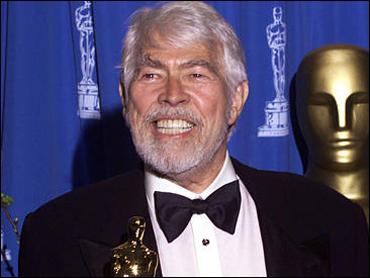 James Coburn, the tough-guy actor in films that included "Our Man Flint" and "The Magnificent Seven," but who won an Academy Award years later for his portrayal of a dissolute father in "Affliction," died Monday. He was 74.

Coburn died of a heart attack at home while listening to music with his wife, said his manager, Hillard Elkins.

Coburn won his best supporting actor Oscar for the 1998 film after overcoming a 10-year struggle with arthritis that left one hand crippled.

Born in Laurel, Nebraska, on Aug. 31, 1928, Coburn studied acting in Los Angeles and with Stella Adler in New York. He appeared on stage in New York and in such dramatic television series as "Studio One" and "General Electric Theatre" in the 1950s.

He made his movie debut in "Ride Lonesome" in 1959 and gained the public's notice a year later when he played the knife-throwing Britt in "The Magnificent Seven."

While Coburn left his mark on the big screen, he blazed an even wider trail on television, beginning in the mid-1950s and early 1960s, appearing on "Bat Masterson," "Wagon Train," "The Rifleman," "Rawhide," "Bonanza," "The Untouchables," "Route 66," "The Naked City," "Perry Mason," and "The Twilight Zone."

Later in his career, he continued to be a favorite for casting directors looking for just the right tough guy, and he appeared on "Murder, She Wrote," "Picket Fences," and "The Profiler," among many others.

Coburn also trod in the realm of the light-hearted, appearing on "The Muppet Show," "The Muppet Movie," "I Love Muppets," "The Nutty Professor," and as the voice of CEO Henry J. Waternoose III in last year's "Monsters, Inc."

Coburn played sidekicks and villains until the late 1960s when he cashed in on the James Bond mania with the humorous spy spoofs "Our Man Flint" and "In Like Flint."

Such films as "The President's Analyst," which he also produced, the World War II escape epic "The Great Escape" and "Golden Girl" followed.

In the 1980s he was forced to dramatically cut back on the amount of work that he did, as a result of the onset of arthritis, but he continued to work in smaller roles in feature films and in guest roles on television.

He said he "healed himself" with pills that had a sulfur base. His knuckles remained gnarled, but he said in a 1999 interview with The Associated Press that the pain was gone.

He said at that time, when the film roles weren't coming, "I've been reading a lot of stuff. I want to go to work. It's what I do best; it's the only thing I can really do... Actors are boring when they're not working, it's a natural condition, because they don't have anything to do, they just lay around and that's why so many of them get drunk. They really get to be boring people. My wife will attest to that," he said with a hearty laugh.