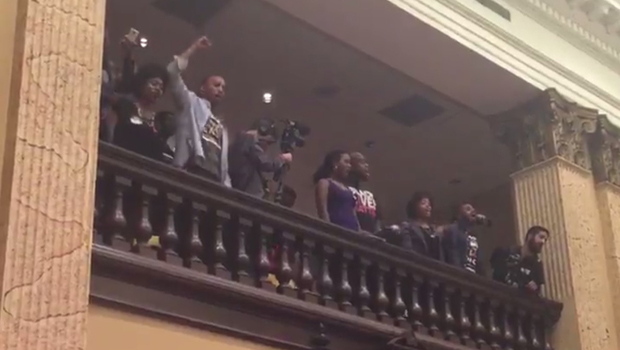 BALTIMORE -- Activists opposed to the permanent appointment of Baltimore's interim police commissioner occupied City Hall Wednesday night and told police they wouldn't leave until the commissioner and mayor agreed to a list of their demands, including changes to police tactics and significant investment in education and social services.

The protest lasted until the early morning hours, Baltimore Police said on their Facebook page.

The protest began when members of the Baltimore Uprising coalition, which includes both high school and community activists began shouting from the upper gallery of a conference room as a city council subcommittee prepared to vote for Kevin Davis as permanent commissioner. The full council is scheduled to vote on the appointment Monday.

"All night, all day, we will fight for Freddie Gray!" the activists chanted amid calls to postpone the vote. "No justice, no peace!"

Three of the subcommittee's five members voted in favor of Davis. Councilman Nick Mosby, who is married to State's Attorney Marilyn Mosby, voted against the confirmation, while Carl Stokes, who is running for mayor, abstained.

After the vote, committee members began to leave, but the protesters refused to go. Police spokesman T.J. Smith said in an email that 35 protesters were inside and that police were "monitoring the situation." No violence was reported.

People were sleeping in shifts.

Earlier Wednesday, a spokesman for the group said the protesters would not leave until Davis and Mayor Stephanie Rawlings-Blake agreed to implement a list of demands. Among them: that police avoid using military-type equipment such as armored vehicles, and only use riot gear as a last resort to protect officers.

In the interest of constitutional rights, the protesters said, they also want officers to always wear badges and name tags. And they want to be able to protest in larger areas and for longer periods of time than "would normally be tolerated."

In addition, they are asking police to be "more tolerant of minor law breaking," such as the throwing of water bottles, "when deciding whether to escalate the use of force."

Rawlings-Blake appointed Davis interim commissioner in July after his predecessor, Anthony Batts, was fired amid the most severe violent crime spike the city had seen in 43 years. The spike followed unrest and rioting in April prompted by the death of Freddie Gray, a black man who died after suffering a critical injury in police custody.

It was Marilyn Mosby who decided to prosecute six officers in connection with Gray's death. All of them are awaiting trial. In the aftermath of Mosby's decision and the widespread unrest, homicides began to rise and residents in crime-addled neighborhoods accused police officers of abandoning their posts.

Following the subcommittee's vote, Davis called Wednesday night's protest an "act of civil disobedience" that was "part of the healing process."

When asked by CBS affiliate WJZ if he was discouraged by the backlash, Davis said "Not at all."

"This is just part of where the city is right now," Davis told WJZ. "If we're going to get to the other side of it, we've got to go through all these moments."

Addressing the council subcommittee earlier, Davis said he remains committed to training officers to actively engage and interact with community members. Davis also emphasized his commitment to "respect and fight for the right for Americans to assemble and peacefully protest."

"2015 is the year that things change," Davis said, referring to the task of repairing the tense relationship between the police and the public in Baltimore.