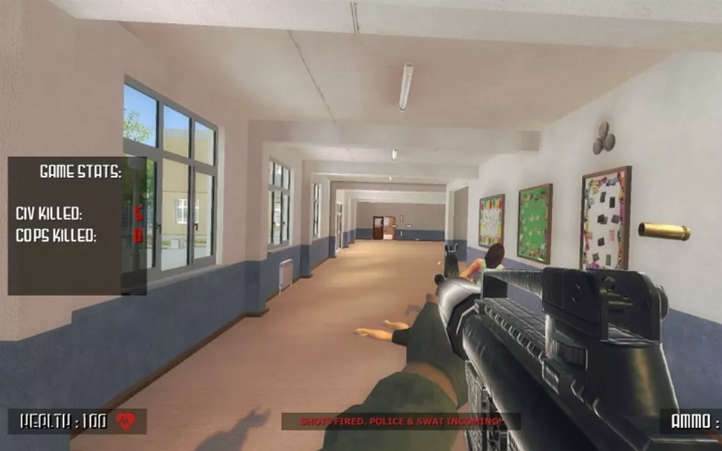 MIAMI -- Video game developer and digital distribution company, Valve, announced Tuesday they removed controversial game "Active Shooter" and the developer responsible from its digital storefront Steam, CBS Miami reports. The game had been condemned as insensitive and inappropriate by the parents of students who were shot to death during the massacre at Marjory Stoneman Douglas High School.

A statement released by the company read:

"We have removed the developer Revived Games and publisher ACID from Steam. This developer and publisher is, in fact, a person calling himself Ata Berdiyev, who had previously been removed last fall when he was operating as 'Interactive' and 'Elusive Team.' Ata is a troll, with a history of customer abuse, publishing copyrighted material, and user review manipulation. His subsequent return under new business names was a fact that came to light as we investigated the controversy around his upcoming title. We are not going to do business with people who act like this towards our customers or Valve."

"Active Shooter" was a first-person shooter where the player could choose to be the shooter or member of an elite SWAT team. It was developed by Revived Games and published by the company Acid, which had said it plans on selling the game for $5 to $10 on the video-game marketplace Steam and releasing an alternate "civilian" mode.

According to CNET, the game included school settings complete with rows of desks, a school gym and hallways lined with lockers.

Active Shooter was set to be released on June 6, according to CNET.

According to the Miami Herald, the game would have come with the following disclaimer: "Please do not take any of this seriously. This is only meant to be the simulation and nothing else. If you feel like hurting someone or people around you, please seek help from local psychiatrists or dial 911 (or applicable). Thank you."

Student Jaclyn Corin started a Change.org petition to have the game removed.

The father of murdered student Jaime Guttenberg said he is horrified and thinks the game should not be released.

"My daughter died in an actual school shooting 3 months ago along with 16 others, we just had 10 die Texas. We've had others, this is simply unacceptable," said Fred Guttenberg.

Others agree including 15-year-old Austin Foote who ran for his life the day of the massacre.

On Sunday, Ryan Petty, the father of a 14-year-old Marjory Stoneman Douglas High student killed during the Feb. 14 mass shooting, called for the game's release to be canceled.

"It's disgusting that Valve Corp. is trying to profit from the glamorization of tragedies affecting our schools across the country," Petty, who is running for Broward County School Board, said in a statement. "Keeping our kids safe is a real issue affecting our communities and is in no way a 'game.'"

Andrew Pollack, the father of 18-year-old Meadow Pollack, who was killed on the third floor of the high school's 1200 building, said "sick people" were behind the game's creation and release. He said these kinds of games desensitize young people to the tragedy that befell his daughter.

"The last thing we need is a simulated training on school shootings," said Pollack, the founder of the school-safety advocacy group Americans for CLASS. "Video game designers should think of the influence they hold. This really crosses the line."

Guttenberg points out there are other communities besides Parkland, that are still mourning.

"My daughter died in an actual school shooting three months ago, along with 16 others, we just had 10 die Texas. We've had others, this is simply unacceptable," he said.